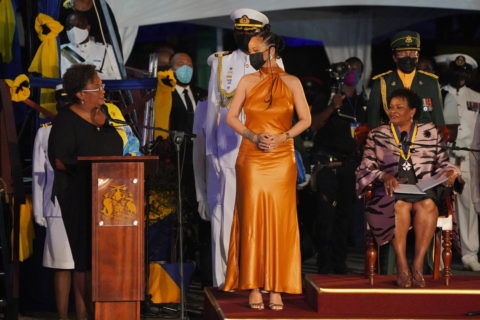 Rihanna? That’s “The Right Honourable Robyn Rihanna Fenty” to you.

Rihanna — world-renowned singer, beauty mogul and fashion designer — can now add National Hero of Barbados to her list of titles.

At a ceremony held on November 29, the Caribbean island officially became a republic after removing Queen Elizabeth II as head of state. Naturally, one of the nation’s first acts of celebration was to honour Rihanna, who was raised in the capital city of Bridgetown.

Attending the ceremony in a Bottega Veneta orange silk dress, Rihanna, born Robyn Rihanna Fenty, was given the honour by Prime Minister Mia Mottley. “May you continue to shine like a diamond and bring honour to your nation by your works, by your actions, and to do credit wherever you shall go,” said Mottley, referencing Rihanna’s 2012 hit “Diamonds.”

Now titled “The Right Honourable Robyn Rihanna Fenty,” the 33-year-old is the 11th Barbadian and the second woman ever to be given the title of National Hero.

BREAKING: Rihanna is conferred with the honor of National Hero of Barbados by the prime minister pic.twitter.com/I036f4O2zx

Though Barbados gained independence from Britain in 1966, the recent ceremony is symbolic of the nation’s breakaway from its colonial past. Ending nearly 400 years of British rule, the island nation officially stopped pledging allegiance to Queen Elizabeth II and swore in its first president, Sandra Mason.

The Queen’s eldest son and heir Princes Charles attended the ceremony, where he was awarded The Order of Freedom of Barbados. “From the darkest days of our past, and the appalling atrocity of slavery, which forever stains our history, the people of this island forged their path with extraordinary fortitude,” he said in a speech, referencing Britain’s violent history of colonization.

Barbados is the latest Caribbean ​​island to remove Queen Elizabeth as head of state, joining Trinidad and Tobago, Guyana and Dominica. Today, the Queen remains head of state for 15 countries, including Canada.

A special moment for The Prince of Wales as he receives the The Order of Freedom of Barbados – Barbados’ highest-ranking honour. pic.twitter.com/bdej2iQVP4

— The Prince of Wales and The Duchess of Cornwall (@ClarenceHouse) November 30, 2021

Despite Barbados cutting political and ceremonial ties with the United Kingdom, Mottley told Vogue in September 2021 that she has a strong relationship with the royal family and Prince Charles in particular. “Our determination to become a republic is not about a rejection of [the royal family] personally,” she said. “It is an assertion that it must be available to every Barbadian boy and girl to aspire to be the head of state of this nation. It is not just legal, it’s also symbolic as to who or what we can become globally.”

This is perhaps best seen through Rihanna, who forever reps her Caribbean heritage in her music and creative endeavours. In 2017, the street in Barbados where she grew up was renamed “Rihanna Drive” in her honour. And the following year, she was given the title of Ambassador Extraordinary and Plenipotentiary, a role that involves promoting education, tourism and investment for the island.

Needless to say, the star — who is now an estimated billionaire according to Forbes — has a lot going on. Undertaking the role of National Hero seems like a fitting next step, wouldn’t you say?

Photography by Jonathan Brady courtesy of Pool/Getty Images
Get the best of FASHION in your inbox Thanks for signing up!
The latest fashion, beauty and celeb news delivered right to your email #FASHIONforall Now, check your inbox to complete your subscription
We won’t ever use your email address for anything else
Want even more FASHION? Follow us on social media.