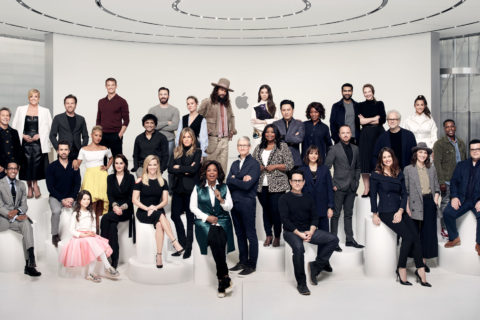 "We have this unique opportunity to rise to our best selves in how we use and choose to use both our technology and our humanity."

On event day, you enter Apple Park, the company’s 2.8 million square foot campus in Cupertino, California, and you’re surrounded by fruit trees and the swelling sounds of a sci-fi film’s score. Every five feet, there’s a uniformed Apple employee greeting you with a wide smile and frighteningly genuine “good morning!” On the walk from the gate to the Steve Jobs Theatre, you’ll likely overhear multiple attendees liken the ambiance to Disneyland. Other comparisons that could be made: Jurassic Park, the Pentagon and that bad Emma Watson movie The Circle.

On March 25, hundreds of journalists from around the world gathered for Apple’s first event of 2019, where Tim Cook took to the stage and announced four new Apple services: Apple TV+, Apple Arcade, Apple News+ and Apple Card. Five minutes into the two-hour presentation, I realized I should have been keeping a clap count. Tim Cook says the words “Apple News”? Applause. He says the company’s services are designed to keep your personal information private and secure? Even louder applause. The stage goes black, the audience goes silent, and Steven Spielberg magically appears under a spotlight? Get on your feet, cup your hands around your mouth and start whooping. The energy in the room, as you might imagine, is infectious — and the enduring enthusiasm is unlike anything I’ve experienced outside of a sports stadium or Beyonce concert.

Almost an hour in, Cook welcomed a host of Hollywood elite to the stage to introduce the 1000 or so of us in the theatre—and the millions tuning in at home—to Apple TV+, the company’s foray into Netflix-esque original entertainment. The on-demand subscription streaming service, however, promises to be a little different: your Amazon Prime Video, iTunes purchases, Crave content and cable television channels will all be available through one seamless application on iPhone, iPad, Apple TV, Mac, smart TVs and streaming devices. Essentially, everything you watch other than Netflix will be available through Apple TV. You can swipe through your catalogue of series, films and live sports without bouncing from app to app—it’s like channel surfing, but every channel is playing something you want to watch. And, on top of that, you’ll have access to exclusive shows, movies and documentaries from the world’s greatest storytellers. Here’s a preview:

The list of artists involved in Apple TV+, photographed by Art Streiber in the Avengers-esque class portrait featured at the top of this article, is long: Oprah Winfrey, Steven Spielberg, Jennifer Aniston, Reese Witherspoon, Octavia Spencer, JJ Abrams, Jason Momoa, M. Night Shyamalan, Chris Evans and Brie Larson to name just a few. For every famous face that spoke on stage, there were another three in the crowd, silent supporters. There also seems to have been a champagne-toast post event, as seen in this Emmy-worthy Instagram video of Witherspoon, Winfrey, Jennifer Garner and Rashida Jones gabbing about being “Apple Girls” and flashing their Apple watches for the camera. I didn’t score an invite to that part of the event, but I did rewatch clips of it multiple times on my Apple device.

Here’s a quick roundup of Apple TV+ moments that got us most excited:

“In The Morning Show we pull back the curtain on the power dynamics between men and women in the high-stakes world of morning news shows,” Witherspoon explained on stage. “It’s a real insider view into the lives of the people who help America wake up everyday.” A few post-presentation attendees thought this meant Apple was producing an actual Today Show-style morning segment. They were quickly corrected: the Kerry Ehrin-directed series is a scripted drama that I hope will compare to Parks and Rec and The Office.

When Jason Momoa takes the stage, he asks everyone to close their eyes. “Try to think about the world this way,” he instructs, ambient forest noises being projected around us, “heard, touched, smelled, sensed—but without sight.” It’s an appropriate exercise: See is a post-apocalyptic drama that imagines a world where every survivor is permanently blind. It’s written by Peaky Blinders creator Steven Knight, directed by The Hunger Games’ Francis Lawrence and stars Luke Cage‘s Alfre Woodard and Momoa, who seems to have this whole fearless wilderness warrior thing locked in.

Kumail Nanjiani stood solo on stage to announce the details of his anthology series, Little America. Fans of his stand up will recognize the immigration story he tells: he talks about growing up in Pakistan, immigrating to Iowa at 18, moving to Chicago and trying to figure out normal, everday life stuff. This is what the series will focus on: American immigrants doing everyday life stuff. “It’s not about telling immigrant stories. These are human stories that feature immigrants,” Nanjiani said. “When you get to know someone and start to see your struggles in their struggles, your passion in theirs, your problems in theirs, they stop being the ‘other.’”

Oprah, unlike every other celebrity-backed series, got her own trailer. Because Oprah isn’t content: Oprah is a category unto itself. The video wasn’t actually for anything Oprah is working on with Apple, and instead featured words like “inclusion” and “amplified” splashed across the scene as The Cinematic Orchestra’s “To Build a Home”—the song has that seemingly soundtracked every emotional TV scenes of this decade—played.

By the time the lights came on and Oprah was illuminated on stage, my eyes had already welled up with tears. ‘There has never been a moment quite like this one,” she said to a captivated audience. “We have this unique opportunity to rise to our best selves in how we use and choose to use both our technology and our humanity.”

Along with two documentary projects, one about mental health and one about workplace harassment, Oprah announced the launch of “the most stimulating book club on the planet.” It’s unclear exactly what this will be, but it sounds like the media mogul will be interviewing authors and facilitating conversations that can be streamed on Apple devices. “I want to reach that sweet spot where insight and perspective, truth and tolerance actually intersect,” she said. “I’ve joined in order to serve this moment, because the Apple platform allows me to do what I do in a whole new way.”

Pricing and availability for the Apple TV+ video subscription service will be announced later this fall.