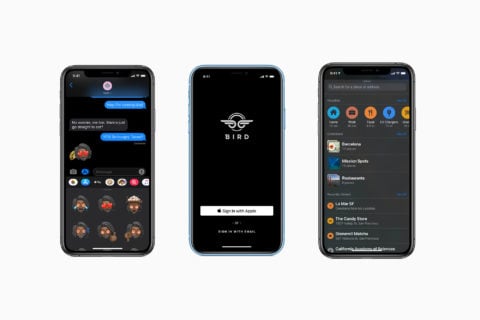 When FASHION’s Associate Editor Pahull Bains attended Apple’s WWDC (World Wide Developers Conference) last year, she described it as Burning Man (without drugs) for devs (software developers). “In this universe,” she wrote, “Tim Cook and Craig Federighi are rockstars.” Yesterday, Apple’s very own rockstars took to the stage to share a series of high-profile software announcements for 2019. They shared news of a $6000 Mac computer, talked about something that’s going to make coding faster, at one point, they killed iTunes.

Some fun, relatable announcements, however, were also made. Here are a few things we think you should look out for when iOS 13 rolls out this fall.

Easier on the eyes, kinder to your battery and optimal for low-light environments, iOS 13’s new Dark Mode is the colour scheme that iPhone-using goths have been clamouring for since 2007.

The new “Noise” feature is great for Apple Watch-wearing clubbers, construction workers and action film enthusiasts. Your watch will now detect the decibel level of your surrounding area and will warn you when the nearby noise levels are high enough to damage your hearing. But don’t worry, Apple was quick to note that the noise app isn’t actually listening to you or recording your conversations.

Apple has been completely rebuilt its Maps database. Aided by an army of road-scanning cars, the previously lacking location app will be considerably more detailed and will come with StreetView-like 3D imagery, a feature Apple has called Look Around. There’s also something called Collections, which will allow users to easily share their favourite restaurants, museums and shopping destinations with friends. They’re aiming to make it an entertaining maps experience, not just an informative one.

Tired of typing in your email with every time you sign up for a new app? Apple’s new built a sign-in solution lets you log in to a service using your Apple account — similar to how you sign up and into sites with Facebook or Google. Here’s how Apple is going different: if for whatever reason you don’t want to share your real e-mail address with a service, Apple will generate a random forwarding email unique to each specific app. Plus, you can do all this using your FaceID rather than a typed out password. We’ve officially unlocked a whole new level of laziness.

For a few years now, third-party apps like Clue, Flo and Glow have allowed Apple Watch users to track their fertility. Now, Apple has built a cycle tracking feature directly into the Health app on iOS, which keeps your cycle info local and eliminates the fear of sharing your sensitive data with outside groups. Plus, the app’s included on your watch for free; tracking your period shouldn’t require a monthly subscription fee.

With a new iOS comes new Memojis. The new little guys come with several added customization options, including makeup, piercings, different teeth and, uh, AirPods. Your personal Memoji will now be automatically made into sticker pack built into the iOS keyboard, so that when you email your boss that you’re staying home sick, you can email her a cartoon of yourself looking severely ill.