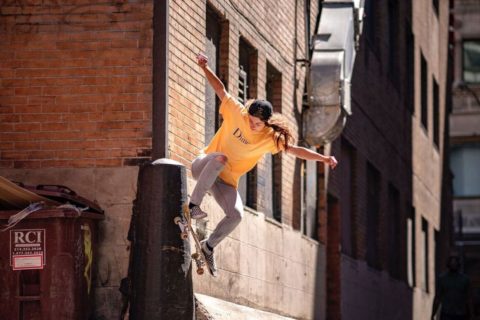 "The lack of female role models in the early 2000’s almost made me quit my dream of becoming a pro skateboarder."

Annie Guglia started skateboarding when she was 11 years old. Her story is one that many female athletes may recognize: back in 2000, her younger brother got a skateboard for Christmas. By the end of the next summer, she was hooked. Now, at 27, Annie has over a decade of professional skateboarding under her belt: she’s an X Games pro-athlete and a rep for Vans Get On Board, a program offering dedicated skateboarding workshops and lessons for women.

“As girls, we’re taught to be careful,” the Montreal-based athlete says. “Skateboarding challenges that social cage that we put young girls into.” Sure, skateboarding’s not for everyone. You have to be comfortable with breaking rules, social expectations—and maybe a few bones. But according to Annie, “It’s really important to show young girls that they can skateboard if they want to, and that they’re capable of doing whatever they put their mind to.”

When u get 10 seconds to skate before getting on the bus again ??: @j_stewart44

What are the stigmas and stereotypes you face as a female skateboarder?

Recently, I was walking down the street with a Thrasher hoodie and brand new shoes, and some skater guy came up to me and said, “Don’t wear Thrasher if you don’t skate!” and I was like… “Okay. Wanna play S.K.A.T.E?” And I beat him with his own board and told him to be careful. Because I’m a girl, he assumed that I couldn’t skate, which is a big stereotype.

It also comes with the label that girls start skateboarding because they want to look cool and meet guys, which is wrong 99% of the time. It happens, just like some guys start skating because they want to look cool in front of girls, but it’s clearly not the majority. If you see a girl at the skate park, she probably just wants to shred, not date. And news flash, skateboarding is trendy right now, so a lot of people are starting. There’s no right or wrong time or reason to start skateboarding. If you love it and do it, you’re a skater.

I know 10-year-old girls who wear Thrasher hoodies and fresh Vans to school, but have never set foot on a skateboard. Do you think mainstream fashion’s acceptance of skate brands this helps or hurts the culture?

I think it brings money and media attention to skateboarding, which is good. I see it as a virtuous circle for skaters and skate brands to take advantage of. It’s funny because I actually wrote my Master’s Thesis on that paradox that skate companies are dealing with.

For my part, I love representing a brand like Vans that is both very core and adaptable to the mainstream public. You can see a whole family wearing Vans, and the most punk rock skater wearing the same shoes, and I think it’s rad because Vans is a core skate brand, so it means that they’re doing a really great job at making the skate culture attractive to the general public. The opposite is less true. If a random brand tries to appropriate the skate culture to sell a product, I think people see right through it and think it’s lame.

Over the past decade, have you noticed competitions, magazines and high-level sponsors—like Vans—starting to pay more attention to female skateboarders?

Absolutely! Right now is a really good time for women in skateboarding.

Ten years ago, you would rarely see a girl at the skate park, in videos or in magazines. In 2012, a company called Meow Skateboards was actually started by Lisa Whitaker from Girls Skate Network to give board sponsorship opportunities to girls that didn’t otherwise get those kinds of opportunities, and even to some of the best female skateboarders in the world that were not considered “professionals” because no traditional skateboard companies would give them a “pro” status.

Right now, companies are starting to realize that 49% of the world is female, and that we can skate too. By sponsoring more women, and by encouraging them to skate with their Get On Board clinics, Vans is paving the way to equality and expressing that women are just as welcome in skateboarding as men.

What does this “industry” recognition mean for the female skateboarding community?

It means that a girl skater today has role models that she can identify with and draw inspiration from. It sounds obvious, but the lack of female role models in the early 2000s almost made me quit my dream of becoming a pro skateboarder because, at the time, it wasn’t a possibility in my mind.

The recent widespread industry recognition and support sends the message to women and girls that it’s possible for them not only to skateboard, but to make it in skateboarding. We see more and more girls getting interesting opportunities, and it’s really inspiring for young girls. Just look at Sky Brown and Rayssa Leal – they’re already bringing it to another level and they’re less than 10 years old… Kids are the future!

How do you express yourself through skateboarding? It’s a sport, but it’s also a form of creativity—right?

Yes. Skateboarding has no formal rules or mandatory figures. Your bag of tricks reflects what only you’ve been practicing, which is what you like and want to do. That’s why it’s equally a way to express yourself and a sport to me. You always have to think outside the box to find new ways to push yourself and learn new tricks to really feel accomplished. And then once you learn a trick, you have the freedom to do it the way you want, wherever you want, and to combine them with other tricks. Ten skaters will show up to a spot, and they will all skate it differently. That’s the beauty of it. Even if two people do the same trick, they’ll do it differently because like other art forms, everyone has their own style that makes them stand out.

How do you think skateboarding can empower young girls?

By giving them self-confidence. To learn anything on a skateboard, you have to overcome fear, and I think the best way to empower young girls with a skateboard is by making them realize that 100 failures that lead to one success is still a success! When I teach young girls how to skate, I go step-by-step and always give them little successes until they’re proud of what they have learned. Then, I encourage them try something a little bit harder. If they fall, I remind them that the more they fall, the closer they get to their goal because no one magically learns a new trick. All skaters fall 100 times until they can do something. That way of thinking is empowering for kids, and applicable in other aspects in life.

In terms of gender dynamics, where do you see skateboard culture going from here?

I read a statistic that the growth of women in action sports in three times faster than men right now – so, for the future, I can only imagine and hope that it will expand to a point where we won’t call it “female skateboarding” anymore!

Photography by Dan Mathieu
Get the best of FASHION in your inbox Thanks for signing up!
The latest fashion, beauty and celeb news delivered right to your email #FASHIONforall Now, check your inbox to complete your subscription
We won’t ever use your email address for anything else
Want even more FASHION? Follow us on social media.