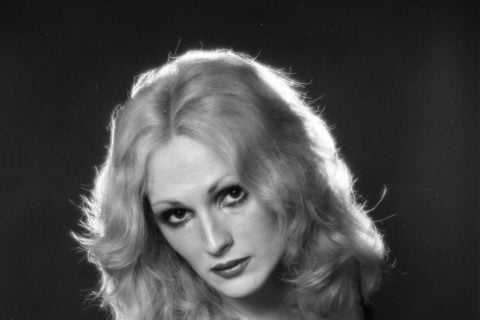 Who Were Andy Warhol’s Superstars? A Guide to Underground Cinema’s Mysterious Muses

21st century fame wouldn’t be what it is without the influence of Andy Warhol. Because of him, we care about the personality of the star just as much, if not more than, the work they create. If he were alive today, Warhol would absolutely be consumed with celeb blogs, weekly tabloids, and hot takes on Twitter. (He’d totally live for Keeping Up With The Kardashians.)

The prolific Pop Art artist blended celebrity and art effortlessly together. His silkscreens of movie stars (Marilyn) and leaders (Mao) are iconic but less famously, he was an experimental filmmaker as well. He often provided little instruction to his actors; instead setting up the camera, turning it on and off, and encouraging his stars to be act largely like themselves. Warhol invented his own idea of the Superstar, which was often characterized by the actresses, models, socialites and artists he hung around with.

His films, mostly made in The Factory in New York, were sexy, excessive, and completely riveting bacchanals. He hit his stride in the mid-60s when he began exploring themes of masculinity, homosexuality, beauty, and eroticism on film.

The latest TIFF Bell Lightbox exhibit, Andy Warhol: Stars of the Silver Screen, brings Warhol’s art and celebrity to Toronto from Oct. 30 to Jan. 24 2016. The exhibit does focus on Warhol memorabilia around fame (photos, tributes to Hollywood stars like Marilyn Monroe, Kim Novak, etc.) It will also screen his films in the programme Nothing Special: Andy Warhol’s Star System, including his box office hit, The Chelsea Girls, which feature many of the Superstars he created. To celebrate this exhibit, we take a closer look at who these Superstar women in his life and films really were.

Edie Sedgwick
Edie Sedgwick was Warhol’s most famous female Superstar. The swift rise of the Californian born star, from the Boston-area pedigree Sedgwick family, is both exhilarating and tragic. Her family life was strict: her father’s struggle with his masculinity, art, and classic propriety deeply impacted the Sedgwick children; her brother Minty grappled with mental health issues and his suicide in March 1964 affected Edie in such a profound way. She was in and out of hospitals in her teens and throughout her twenties for similar issues.

Edie met Andy in early 1965 at a party held at Lester Perksy’s house. Their connection was immediate and fiery; Warhol thrived on Sedgwick’s effortless bourgeois incandescence. She was so chic; appearing as a model in magazines, such as Vogue, with her big earrings, blackened eyebrows and eyelids, signature leopard skin coat, and black tights. Sedgwick appeared in a number of Warhol’s films, including: The Chelsea Girls, Kitchen, Poor Little Rich Girl, and Lupe.

In Jean Stein’s Edie: American Girl, dozens of Warhol associates discuss her years before and after Warhol up to her death in November 1971, saying she gravitated to anyone (and any drug) that could give her temporary relief. Sedgwick had a toxic love affair with Bob Dylan — “Leopard-Skin Pill-Box Hat” is supposedly written about her. She would literally set fire to her surroundings; burning part of her apartment on the Upper East Side, as well as the Chelsea Hotel. Edie and Andy’s friendship fizzled and by the late 1960s she left The Factory to get medical help for her drug addiction. At her peak, Sedgwick took almost 35 pills a day; a combination of amphetamines and barbiturates, the latter of which would kill her in an overdose.

Ingrid Superstar
Very little is known about Ingrid Superstar. She was in a few of Warhol’s films, according to her incredibly sparse IMDB page, and circled the scene. Her real name is a mystery, too. Its inconsistency is part of her mythology. She was brand new as Ingrid Superstar; it’s as if she didn’t exist before this name. She was born Ingrid von Scheven. Others recall her name to be Ingrid von Schefflin or, as noted in Ultra Violet’s memoir, Irma. She came after Edie as, unsurprisingly, a passive aggressive jab at Edie and Andy’s souring relationship. René Ricard says in Edie that Ingrid, a New Jersey native, was found in a 42nd Street bar and called “the Ugly Edie” and given the name Ingrid Superstar to cause upset.

Superstar’s last listed film credit was in 1969 and not much else is known about her after that. She disappeared on Dec. 7, 1986 in New York State. She was said to have gone out for cigarettes and never returned. She is presumed dead but her body has never been found. Not long after her disappearance, her mother heartbreakingly took out an ad in the paper asking Ingrid to come home “so they could play ‘Morning Dew’ without feeling sad.”

Brigid Berlin
Brigid Berlin was exactly the kind of person Andy Warhol would be drawn to: the daughter of the chairman of the Hearst Media Empire; wealthy; addicted to drugs and alcohol; and eccentrically artistic. Berlin’s early life was framed by her weight. Her mother would send her away to lose weight and gave her money and speed pills as a reward for every pound lost.

Berlin met Warhol around 1964 and became one of his closest friends. The B in Andy Warhol’s book title Andy Warhol’s Philosophy (From A to B and Back Again) is said to stand for Brigid. She would wander the Factory, naked at times, making her “trip books”, which were full front to back with doodles, scraps, and more that she made while high on speed. She even had a book that featured imprints of scars people had on their bodies. Berlin appeared in many of Andy’s most noted films including Bike Boy, and Lonesome Cowboys. She was nicknamed Polk (poke) because she constantly shot up or injected others with drugs. She even injected herself on camera in The Chelsea Girls.

Berlin was so intricately woven into the Factory’s day-to-day operations: permanently working there after Warhol established Interview magazine; she also recorded and took photos of everything in the Factory from the mid-1960s to the early ‘70s. Berlin had books published, too, (some more sexual in nature) and performed onstage. She got sober later in life but relapsed in 2008.

Viva
Warhol christened Janet Susan Mary Hoffmann with the name Viva. While Viva’s career in Warhol’s films didn’t really take off until the latter part of the 1960s, she was still part of The Factory scene. She showed up in 1965 looking to make money and then just didn’t leave for many years. Viva modeled and painted — prerequisites for the Warhol crew. In Edie, Viva says “none of the superstars really had a role in the Factory”— they were simply there for Andy.

Viva’s most controversial film with Warhol was Blue Movie (1969) taken in by police on the grounds of obscenity, where conversations of the Vietnam War, Nixon, and so on, are mired by the sex acts between Viva and Taylor Mead on screen.

Viva and Warhol eventually drifted apart. Viva would work on other major films and wrote for places such as The Village Voice and New York Woman. Viva is, very important to note, the mother of actress, and inspiration to us all, Gaby Hoffman.

Ultra Violet
Isabelle Collin Dufresne was another painter, model, beautiful person to inhabit Warhol’s scene — though, however involved she was in his work and life, she lived more peripherally to the madness than most. She, too, came from a bourgeois background in a town 500 miles from Paris. She wove herself into the budding art scene of New York after arriving in 1953. One of her most famous relationships was with surrealist master Salvador Dali, who would introduce her to Warhol in 1963. So coolly written in Famous For Fifteen Minutes, Dufresne says that Warhol had suggested names for her like Poly Ester or Notre Dame but she would choose her own: Ultra Violet.

Ultra Violet became a second personality. People would not recognize her when she dressed more like Isabelle—her deep violet and tousled hair pulled up in a tight chignon as she wore a slick Chanel dress —as the wild Ultra Violet with the extraordinarily long tongue. She appeared in a number of Warhol’s films in the almost decade she was part of the scene.

The luminous Candy Darling was born James Slattery. Before she would transition to Candy Darling, Slattery grew up in Long Island where he would, like Andy, indulge in a fascination with celebrity; watching classic Hollywood movies and learning to impersonate stars such as Joan Crawford and Kim Novak. Slattery would eventually come out to his mother after being caught dressing in women’s clothes.

She met Warhol in 1967 and was captivated with Andy and his Superstars. In Famous for Fifteen Minutes, Candy has a conversation with Ultra Violet that captures the thirst of not only Warhol but also his Superstars when it came to fame. “Hollywood is taking too long to get in touch with us. We’ll make films with Warhol. If you are a Warhol Superstar, you have it made.” She made her first film with Warhol, Flesh, in 1968.

Darling’s book, Candy Darling: Memoirs of an Warhol Superstar, fascinatingly weaves through Darling’s non-linear thoughts on womanhood, transitioning, marriage, Andy, celebrity and the want and need for more than what was offered to her. She truly believed in the brightness of her person and that she was meant for fame. Candy Darling would appear alongside other trans actresses in Factory associate Paul Morrissey’s Women in Revolt (1971.) Her fame was, sadly, short-lived as she passed away from lymphoma at age 29 in 1974.