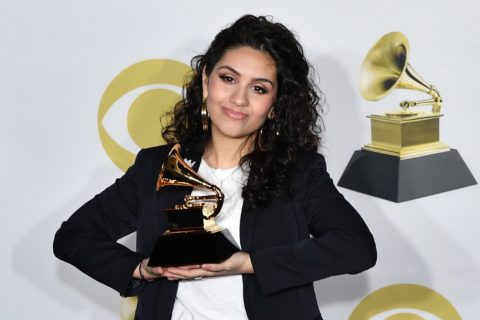 “[Drake] said I am doing such a good job at making our country and city proud."

Canada’s own Alessia Cara took home the Grammy for Best New Artist at last night’s award ceremony, putting her in the company of Adele, Amy Winehouse, Christina Aguilera and Mariah Carey. But north of the border, Cara is hardly a new face. A few years back, FASHION sat down with the rising Canadian star for our Winter 2016 issue. To learn more about the Grammy winning artist and where she got her start, check out the interview and exclusive photos below:

When Alessia Cara met Drake for the first time, the 19-year-old singer had plans to give the rapper an earful. She intended on throwing a pile of compliments his way to thank the man for being such a great example for her. But at said meeting, the Canadian soulstress, from Brampton, Ont., couldn’t seem to get the words out fast enough; instead, she found herself dizzy with Drizzy’s praise.

“He said I am doing such a good job at making our country and city proud,” Cara says days after finishing up her exclusive photo shoot with FASHION. “Because of him—and the support from Taylor Swift—I feel like I’m a Drake-Swift co-sign artist,” she laughs. When pushed to answer whether a Drake-Cara remix is on its way, she says coyly, “I don’t know. I hope he remixes all the tracks.”

It isn’t hard to understand why a handful of powerhouse names in pop music—including Lorde, who tweeted her admiration for Cara—are completely enamoured with her. Cara’s debut album confirms all the star-studded hype. Off the top, the disc includes the hit “Here,” an unconventional anthem that rivals Lorde’s “Royals.” Honourably sampling Isaac Hayes, the track tells the tale of an “anti-social pessimist” who refuses to conform to the coolness of the party crowd and avoids posers at any cost. “I’ve lived that song too many times,” says Cara. As the lyrics spell out in “Here,” the singer has had to hide from unsavoury types “somewhere in the corner, under clouds of marijuana, with this boy who’s hollering.” In the next verse, Cara croons that she’s “congregating next to the refrigerator” while some girl is “talking ’bout her haters” but “she ain’t got none.” That’s when it happens—the catchy hook switches into pure social commentary.

“People want to create something bigger for themselves, and making up drama that isn’t there gives people the impression that they have haters,” says Cara. “It’s all for attention so it looks like they are important.”

Although she is, by definition, a viral sensation (aside from the celeb call outs online, she has racked up more than 10 million views from “Here” and a couple of thousand for posting hilarious impressions of Ariana Grande, Alanis Morissette and Nicki Minaj), Cara questions the validity of a hashtag-obsessed culture.

“It’s so stupid, if you think about it,” she says. “Getting more followers or fans is what runs our lives now. Real social situations are taking a back seat to social media. If I could lead the way, that would be amazing. I’m glad people are also seeing a new perspective.”

Songs such as “I’m Yours” (which takes on the topic of independence in a relationship) and “Scars” seem to counter all the side effects of the vapid Kartrashian thinking that’s running rampant today. The latter track recalls the emotion of Mary J. Blige’s early work and focuses on the issue of crafting a public image.

“[‘Scars’] is a message for other women who feel the same way I do,” says Cara. “It’s good to have a reminder that we can love ourselves and be beautiful even though we don’t really fit into certain standards of what beauty may be.”

Instead of relying on focus groups and trend-worshipping stylists to shape her image, Cara wishes to usher in a new era of independence in music. “I love experimenting with clothes for photo shoots, but when I’m onstage, I want to show people that there are other options. You can just be yourself and still make good music.”