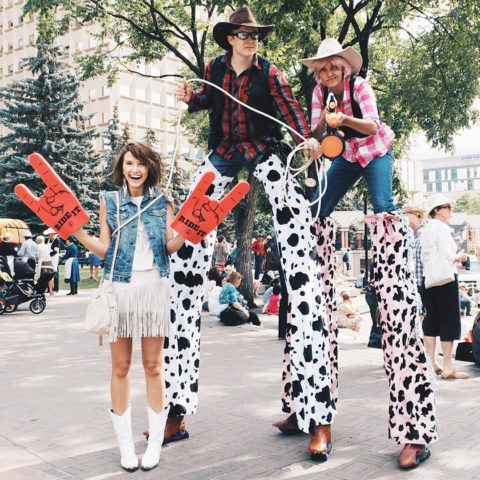 In Alberta, the summer season is short but the days are especially long (really—you’ll be watching the sun set well past 10:00 p.m. on the summer solstice). To make the most of it, weekdays and weekends in Edmonton and Calgary are jam-packed with warm-weather events and festivals of the art, design, and musical variety from June through August. We’ve already rounded up festival style ideas that are anything but basic, so here are five opportunities within the next 10 weeks to make your festival-fashion dreams a reality without leaving the city—or at least without crossing the U.S. border.

Kick off the season with 30,000 other creative types at Sled Island Music & Arts Festival, now in its 10th year. Annually, a guest curator tailors this eclectic five-day music, comedy, film and visual arts festival into something unique. For the 2017 edition, rapper Flying Lotus is inviting all his friends—like London, U.K.-based producer IGLOOGHOST and Philadelphia’s Tierra Whack—to join 250 additional acts across 35 venues in Calgary.

Join Edmonton’s most stylish crowd as they toast the 13-day The Works Art and Design Festival at The Works Summer Solstice Gala. Benefitting council scholarships and art internships at The Works, approximately 400 guests take over the Empire Ballroom and Terrace at the Fairmont Hotel MacDonald, the most upscale venue on our list. Maybe save the Kylie highlighter hair for later and up the after-hours glam with that off-the-shoulder cocktail dress. When it comes to backdrops, this view of the river valley can’t be beat.

An Alberta summer events round-up wouldn’t be complete without the Calgary Stampede, a.k.a. “The Greatest Outdoor Show On Earth,” and everyone gets involved. In addition to the rodeo, street parades and pancake breakfasts, there are nightly live shows at multiple stages throughout the city. (Past musical acts have included Garth Brooks, Katy Perry, Keith Urban, Dragonette and Carly Rae Jepsen.) Take a cue from Kate Middleton circa 2011 and embrace the western boots and the white Cowboy hat—it’s gonna be an intense 10 days.

Aloe Blacc, Broken Social Scene, Serena Ryder, Dan Mangan, Basia Bulat—this intimate three-day music festival at the Heritage Amphitheatre in Hawrelak Park will get you up close and personal with your favourite indie artists in the heart of “Festival City” (an Edmonton nickname that couldn’t be more accurate). You’re not only free to roam the grounds with a beer in hand but also to browse local designer goods at Mark’t and dine at the best food trucks in the city. #irodeoyeg

Calgary might be known for its warm chinook wind, but it’s also the sunniest city in Canada. (Really—it has around 2,400 hours of sunshine per year.) So if there’s one festival ticket you should buy to embrace the season, it’s the aptly named Chasing Summer. A two-day, three-stage crash course in EDM at Calgary’s Max Bell Centre Festival Grounds, this year’s event is headlined by the likes of Tiesto and Zedd—Kylie highlighter hair-approved.

Photography via Instagram/aniab
Get the best of FASHION in your inbox Thanks for signing up!
The latest fashion, beauty and celeb news delivered right to your email #FASHIONforall Now, check your inbox to complete your subscription
We won’t ever use your email address for anything else
Want even more FASHION? Follow us on social media.