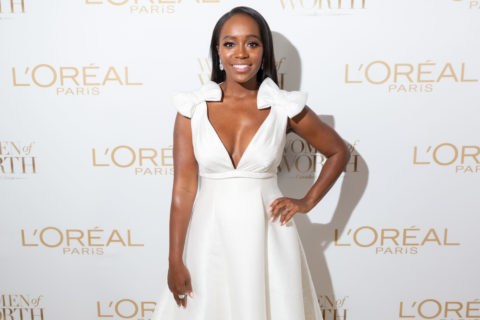 We caught up with the actress in Toronto at the L'Oréal Paris Women of Worth awards.

Yesterday afternoon on International Women’s Day, moving speeches, humble stories and plenty of tears filled a grand ballroom at Toronto’s Omni King Edward Hotel as L’Oréal Paris held its annual Women of Worth gala. The special philanthropic event celebrated a diverse group of ten Canadian females who are selflessly working on causes to address some of the most pressing issues within their local communities. Each passionate change-maker was honoured with a $10,000 grant to help fund their not-for-profit organizations, and this year’s grand prize award winner, Glori Meldrum, received an additional $10,000 to help fund Little Warriors, an Edmonton, AB-based charity and treatment facility dedicated to rebuilding the lives of sexually abused children and their families. Meldrum is a survivor of child abuse herself.

“When Glori talked about not being believed — that’s just such a big conversation right now,” reminisced this year’s host, actress and How to Get Away With Murder star Aja Naomi King. “We’re now talking [more and more] about women being abused or harassed, but to be a child and not being believed? I can’t think of anything more painful. If there’s one thing we should all be doing is protecting our children,” she continued. ‘The incredible thing about Glori is what she did with that pain — that hurt, that trauma — to find the strength to heal others. I’m just in such awe of her.”

After the powerful seated brunch, we sat down with King who opened up about the importance of diversity in Hollywood, her biggest inspirations, working alongside prolific industry names, and saying goodbye to Shonda Rhimes’s Emmy-winning drama How to Get Away With Murder, the final season of which airs this April.

On what makes her feel the most empowered:

“There are a multitude of times I feel empowered but, I have to admit, when I feel like I look great, I feel super empowered. When I love my outfit and I do my makeup I do feel really incredible about myself. There’s something about that that makes you feel untouchable.”

On what she values most about being a cast member on How to Get Away with Murder:

“My favourite part has been the people. Viola Davis, Alfie Enoch, Jack Falahee, Liza Weil, Charlie Weber, Billy Brown — they’re my family and they are the most incredible human beings. They are so talented, so dedicated. Being around Viola especially, it doesn’t matter what comes out of her mouth, you just can’t take your eyes off of her. She is so so dynamic and just being in her presence and being treated like I’m on the same level as her is life altering.”

On life behind the scenes of How to Get Away with Murder:

“[Fans] would probably be surprised with the amount of singing that happens in between takes. Sometimes it will start with Viola clapping and before you know it there’s a little bit of dancing and singing. We could be singing anything, but there’s always a lot of Beyoncé!”

Today is the day we have our FINAL Table Read for the FINAL Episode of #HTGAWM…this picture kinda captures all the feelings I’m having ????

On what she’s learned from writer-producer Shonda Rhimes:

“I feel like I (like the rest of the world) have learned: ‘Look what we can do!’ especially when given the opportunity. Everything Shonda Rhimes has created, everything she has done, [has been huge] for self-esteem. You didn’t see this many black doctors and black lawyers [on TV] before. And it goes beyond just black people. Her shows have been a beacon for diversity and possibility, and to be a part of that — to be one of those faces looking back at people and saying, ‘This could be you too. There’s space for you.’ — is just really incredible.”

On the joys of working on an inclusive set:

“That’s another thing that’s been so great about working on a show like this, because I’ve been on other shows where the majority of the actors were all white. That then meant that the people in the hair and makeup trailer were really more inclined to know what to do with the hair or makeup of white people. But being on a show where you lead as a black person? All of a sudden the possibilities seem endless. There was such greater comfort walking [onto set] and not having to think about my hair and makeup; I could just focus on my lines. I didn’t have to worry about someone putting too much heat on my hair or putting on the wrong kind of product and messing my hair up. That in itself was huge.

Before this show, I’ve had the experience of bringing my own makeup and keeping it in whatever trailer space they put me. I’d wait and let the makeup artist do whatever it is they had to do, and then I’d be like, ‘OK, now I’m going to go and fix it.’ That’s not fair. That’s not fair to me and it’s not fair to any other actor of colour to feel like, ‘Why is it that this [artist] can do that person’s hair and makeup but not mine?’ It makes you feel like you don’t count and that’s not OK.”

On her biggest hair inspiration:

“I love Tracee Ellis Ross! I love seeing what she’ll do next. She once did a long braid, so I then did a long braid with baubles for the ESSENCE Black Women in Hollywood Luncheon this year. I loved that [hairstyle]. And I always love how Kerry Washington looks. Everything she does is just the epitome of elegance. I look to those two women a lot.”

On her dream dinner guest:

“If I could just sit down and ask this person, ‘Tell me how to live’ — it would be Oprah. I’ve met her before and the brief encounter that we had was amazing. I’d want her to walk me through everything!”

On words she lives by:

“Don’t be afraid of trying or going after things because you’re afraid of hearing the word no. That word can’t hurt you.”

On the importance of living in the moment:

“With this career, a lot of the times you can be constantly end-gaming: thinking beyond your current experience to where you want to be instead of living in the moment and enjoying the process of doing what we’re doing. To me, that’s the valuable part. If you’re missing that — if you’re missing the joy in the process — then it’s like what are you even doing here?”

On her favourite red carpet moment:

“This year at the Vanity Fair Oscar Party. I had on this fuchsia pink dress with this gorgeous cape from Nicolas Jebran. I just loved the crap out of that outfit because it was so lightweight, so comfortable and the colour was stunning against my skin tone. My hair was in a super long ponytail. I loved that whole look.”