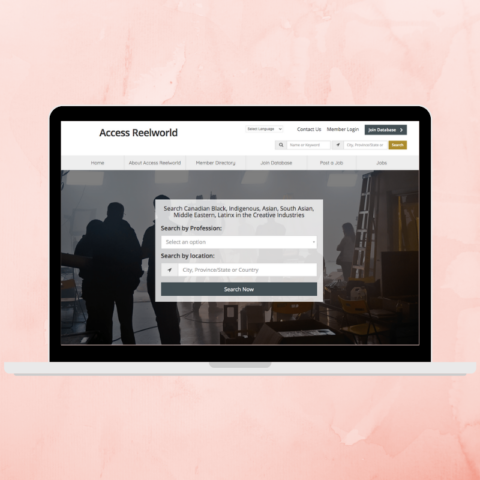 We spoke to its founder, actress Tonya Williams, about the recent launch, why she dislikes the catchall term BIPOC, and her hopes for the industry moving forward.

When it comes to the lack of representation of people of colour in the film and television industry, both in front of and behind the camera, there’s an all too familiar refrain from the industry’s gatekeepers: we don’t know where to look for them. Tonya Williams wants to take that excuse out of the equation. With the launch of her Access Reelworld database, the most complete online database of Black, Indigenous, Asian, South Asian, Middle Eastern, Latinx and other racially diverse communities in the Canadian entertainment industry, a more inclusive and diverse industry is one step closer within reach.

In a matter of a few weeks, the database has already been populated with 400 names of people of colour working in departments like costume design, cinematography and animation, whom current and upcoming productions can reach out to to fill roles on their teams.

Williams, a Black actress who has been a part of the entertainment industry since the 1970s (you may recognize her from her two-decade run as Dr. Olivia Barber Hastings on The Young and The Restless), had the idea for this database back in 2001 when she founded the Reelworld Film Festival, the only film festival to exclusively showcase and promote racially diverse Canadian creators. Here’s why she launched the Access Reelworld database now, why she dislikes the catchall term BIPOC, and her hopes for the industry moving forward.

Tell us a bit about the Reelworld Film Festival and why you founded it.

When I founded the festival in 2001 there were a lot of inequities happening in Toronto. There was very little representation, even less behind the cameras, of Black and Indigenous people, Asian, South Asian, Latinx people of colour. I wanted to create a platform that would push towards changing that. We have a Reelworld Screen Institute as well and between the two of them, we not only screen films and celebrate Canadian filmmakers, but we also create professional development and incubator programs, and do a lot of advocacy work, working behind the scenes with our government to create more access to funding.

How does the Access Reelworld database work and what are the categories it covers?

People were always saying ‘we don’t know where the talent is, and we’d hire more of it if we knew.’ So we began to create this database—which I first had the idea for in 2001, but didn’t have the funding for—which took a good ten months. I had to explain to the web developer how the entertainment industry works—I had to explain that it’s not like a dating app, it’s not like real estate, and take them through all the different levels of the industry. We came up with 75 categories and I’m sure there are more. Whenever somebody emails us saying we don’t have a particular category, we add it. We have everyone in there from a set medic to stunts people to assistants to hair and makeup artists—everything that you imagine hands could touch in a production. We’re also working on a job board, which we’re in the final stages of perfecting.

Reelworld is committed to supporting & developing talent. We love this #flashbackfriday photo of Lyriq Bent, who is thriving as an actor in LA. Help us to create space for more Canadian Black, Indigenous, Asian, South Asian, MIddle Eastern & Latinx stars. Sign up for our database, Access Reelworld at www.accessreelworld.ca.

Where do you think the industry needs to go from here in terms of next steps?

I don’t like the term BIPOC; the minute I heard that term I knew we were going to have trouble. Somebody hires one Asian person and they feel they’ve hired all the BIPOC people they need. We need to remind them that they need to be hiring Black people and Indigenous people and Asian people… you don’t get away with hiring one person and patting yourself on the back like you’ve accomplished something. You know when you put a garden together, you’re very meticulous: these flowers go here and then there’s a little boundary, and then these other flowers… We don’t just throw seeds out randomly. We really care for a garden and I think that’s what real diversity looks like. Do we have all the shades in our garden? It’s not going to happen naturally. Gardens don’t just happen like that. You have to carefully prune and pull out the weeds and make sure everything is shaped beautifully, and I think it takes that kind of diligence. I hear the way people at the top are talking about making change and I know they still don’t get it. Because they’re like ‘we’re going to create more inclusion, we’re going to create more diversity’ but those are just words. I don’t hear the strategic plan that is going to make that happen.

There have been a lot of conversations in the industry recently about the struggles that Black actors face on set when it comes to hair and makeup, in terms of there not being any HMU artists who know how to work with textured hair and darker skin tones. What was your experience in that regard?

It’s hard now, it was impossible before. Wigs were an absolute, you needed to get all kinds of different wigs. Even when I worked on Black productions, they were like ‘where are your wigs?’ That was just a given. It’s so built in. It’s been one of the hardest things to change. By the time I got to The Young and The Restless I’d already been in the business 15 years so I knew how to do my hair—whether it was my own natural hair or wigs—and my own makeup. I’ve also been on sets where there were Black people doing hair and they did not know how to do Black hair. Just because you’re Black doesn’t mean you know how to do Black hair or makeup. Because a lot of those Black people weren’t taught—they went to hair school and were only taught on white hair. As Black actresses we do talk among ourselves about what it must feel like to just roll out of bed, wash your hair, get in the car and go to the studio and they blow dry it and fix it. We don’t know what that reality is, it doesn’t exist for us. My day starts two hours before a white actress’s day starts.

What are some of the positive changes you’ve seen over your many decades in the industry, and what more would you like to see?

I think just the awareness, people talking about things. People didn’t even talk about these things before, they just thought we were being difficult. Now people are starting to recognize it as a problem. But I would rather hear them say ‘we don’t know how to fix it’ than some of the things they say, which are just words they think we want to hear. Throwing out numbers and percentages and the words inclusion and diversity is meaningless. It’s got to be done with precision. Go back to the garden. And I think we’ll know the change is there when we feel it.