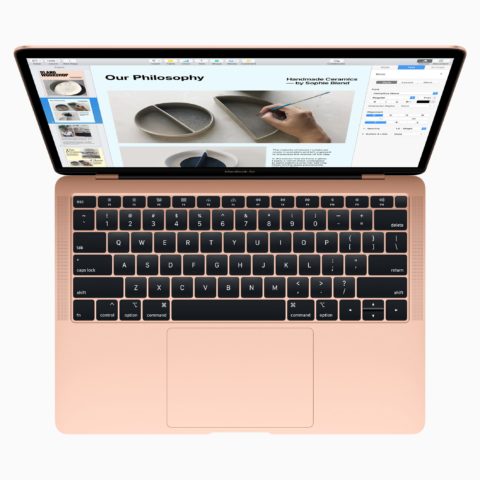 And I’m a Better Boyfriend for It

Last week at their Keynote in Brooklyn, Apple announced a some new things. You may have seen a tweet or two about it.

They have updated their iPad Pro, Mac Mini, and are going to be pushing their local Today at Apple Events hard in order to help people get the most out of their Apple products. Good Stuff. But what got me—and consequently my girlfriend—the most excited was the release of the new and improved MacBook Air. The last time Apple released a new edition of the popular laptop was about three years ago. On the other hand, the last time my girlfriend got a new laptop was when Obama got re-elected.

I was loaned a new MacBook Air for this review. I have used it, but at the moment I’m writing this on my own little MacBook (sadly sans Air). Hannah has essentially taken over the MacBook Air. Which is fine! I don’t mind! It’’s not like she’ll watch the rest of The Haunting of Hill House without me. But I get why she likes it:

As if colour was the only relevant criteria women paid attention to. But really, the new gold colour (which, let’s be honest, reads more as rose gold) is nice to look at. But, not for nothing, when Hannah saw the colour, she used it as evidence that she should definitely be able to use the laptop. It also comes in regular old silver and awesomely-named space grey.

Louder
Look, I know I should probably talk about technological innovations or like processors (in this case: 1.6GHz dual-core Intel Core i5—I don’t know what that means, but the people at the keynote seemed pleased), but honestly, the most significant improvement—at least to people like us who use their laptop to watch everything—is that these new Airs are 25% louder, with deeper bass, too (if you, like Meghan Trainor, are into that).

No disrespect, but Netflix’s sound mixing can sometimes be spotty. It can be hard to hear what’s going on sometimes when we watch stuff on my laptop. Also, I’m clearly very old. But I watched the hell out of some Ozark yesterday on the Macbook Air and heard every word. And that show whispers. A lot.

For the first time, the Air’s enclosure is made from a custom, Apple-designed aluminum alloy that enables the use of 100% recycled aluminum. Any innovation that reduces waste is a good thing. And, sure, maybe it feels good to have people know that your computer is probably greener than theirs.

My laptop, which we use for all things entertainment, is a “>nervous and suspicious creature that requires validation every time we stop watching or touching it for five minutes. That means we’re typing in the password often. Is this the worst problem in the world? No. But it’s cool that Macbook air uses the same Touch ID as your iPhone. Integrated into the power button is a capacitive single-touch sensor (which are obviously words I use all the time, both in and out of that specific order) that reads your fingerprint so you don’t have to type in all those letters, numbers, and symbols. The touch can also be used with Apple pay.

All the Other Things

Of course there are other cool new things about the MacBook Air. But honestly, these are the four that have most impressed my girlfriend and me. We like that Touch ID! My password is very long, and often requires two hands! But, that doesn’t mean you and yours won’t absolutely love the other things just as much. You’ll probably dig the 4 million pixels that illuminate the retina display. The detail and range of colours is impressive. And just because I don’t wear my glasses at night, doesn’t mean I shouldn’t praise the crisp visuals.

Also, battery life! We haven’t taken the loaner laptop out of the apartment (because safety), so we haven’t had the opportunity to appreciate the all-day,12-hour battery life. But, if I were taking it everywhere (which is encouraged and easy to do, since it weighs less than 3 pounds) that battery life would be so, so very important to me.