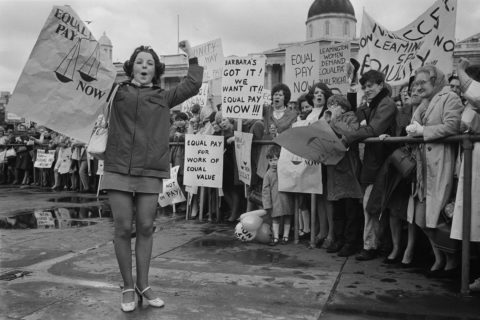 There’s a good chance that you’ve heard someone say: “the gender pay gap isn’t real.” You may have heard that this economic divide between men and women is misleading, over-simplified or, worse yet, a lie.

In celebration of Equal Pay Day, we’re going to help you rebut these misguided opinions. It is true that women have made strides in closing the gap through education and participation in the labour force — but we’re not quite there yet. In Canada, recent data shows that women working full-time earn 74.2 cents for every dollar that a man makes.

Here are just some of the myths about the gender wage gap.

Women are less educated than men.

This may come as a surprise (or maybe it doesn’t), but women are actually more likely to receive a bachelor degree than men are. According to a 2015 article from TIME Magazine, in the 25 to 34 age group, 37.5 per cent of women have a bachelor degree or higher, while only 29.5 per cent of men do. Yet despite women reaching higher levels of education, there has been no correlated decrease in the pay gap between women and men.

There actually is evidence to prove that when women choose jobs, the pay tends to decrease. Let me explain: Historically, when women have entered a specific job in large numbers, that occupation begins to pay less—for everyone.

For this reason, gender segregation in the job market continues to be a contributing factor to the pay gap. However, typecasting job roles with gender is becoming less common, and these once-strict lines—for example, men are miners and women are nurses—are steadily blurring.

Women have to take time away from work to raise children.

There is no proof that being a mother makes a woman less productive on the job. Yet there is a “motherhood penalty” for women who take time away from their careers to care for their children. There’s the argument that when women re-enter the job market after having children, they simply aren’t as experienced as their male counterparts. And this could be valid. Except that men who take time for their children don’t face a “fatherhood penalty.” On the contrary, studies have even found they get a “fatherhood bonus,” receiving higher wages after having a child.

It’s not true to say women don’t ask for raises. A new study shows that women ask for more pay just as often as men do but get it less often. There is, however, evidence to suggest that when women do negotiate their income, they’re socially penalized. There’s a fear that asking for money will come across as pushy and ungrateful, and “the social cost of negotiating for higher pay is found to be greater for women than it is for men,” Hannah Bowles writes in the Harvard Business Review.

When it comes to the wage gap, there are a lot of statistics—many of them claiming different things. You might hear people argue that it’s not possible for all these statistics to accurately reflect reality and that there are too many variables for these numbers to ever have meaning. In calculating the average gender wage gap, this is true. However, the comprehensive “like-for-like” studies that compare male and female pay in identical roles ultimately prove that women are paid less than men.