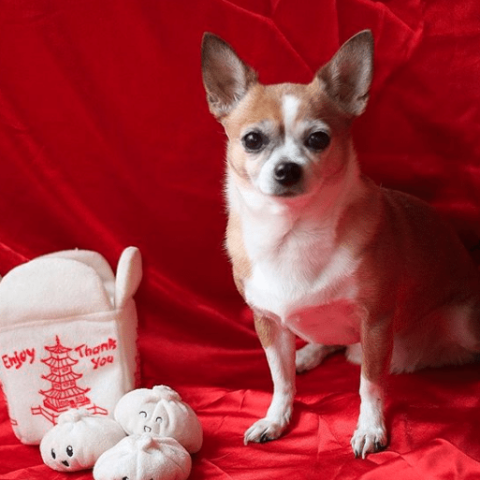 It’s the Year of the Dog! Here are 15 Pups You Should be Following on Instagram

They probably have more followers than you do.

Happy Chinese New Year! On Friday, February 16th, we officially enter into the Year of the Dog. (Which we’re pretty sure is the best year in the Chinese zodiac calendar.) You can celebrate by buying a Prada Chihuahua pouch or a Tiffany Yorkie charm — or you can surround yourself with man’s best friend by following a bunch of doggos on social media. Instagram is full of baby-voice-worthy pups of all shapes, sizes and ages: dogs who wear Supreme, eat brunch and have book deals, PR agents and celebrity BFFs. If you aren’t following these puppies already, then you’re doing Instagram wrong.

Born in Ontario but based in Brooklyn, you can catch this famed goldendoodle (read: golden retriever and poodle mix) getting his burger fix at In-N-Out, catching up with friends over sushi and pumping iron at the gym.

According to Jiff the pomeranian’s website, “Jiff is an extremely talented Movie Actor / Model who is available for Television, Commercials, Films as well as live appearances.” Sure, he looks cute, but with 4.3 million Instagram followers, an app on iTunes and a cameo in Katy Perry’s “Dark Horse” music video, Jiff means serious business.

This fluffy Edmonton native has over 398,000 followers. Just look at that face! Is she a dog? Is she a muppet? Turns out, she’s a bear coat Shar Pei pup.

When you'z a yung heartbreaker ? Tag your Valentine ?? #HappyValentinesDay

Menswear Dog (real name: Bodhi) is an incredibly handsome Shiba Inu, with a better wardrobe than anyone you know. Want to cop a look? Like a *real* fashion blogger, Bodhi tags designers in his curated street style pics.

Toast is a King Charles rescue pup whose Insta bio reads: “She has no teeth like a cute hobo.” This self-declared supermodel pooch stars in a Karen Walker campaign, pens her own weekly column in People Magazine and has her own hardcover style guide.

Who else likes pancakes any time of the day? The blue Hawaiian pancakes from @beabeas_breakfast in Burbank. . ? . ?&?: Amazon #popeyethefoodie #beabeas #petfriendlydining

"‪He was a skater pug, he said see u later pug‬" -Doug

When Doug isn’t touring across America promoting his colouring book, he’s hanging in the studio with Justin Beiber, eating pizza and fulfilling all other “King of Pop Culture” duties.

Marnie is the poster child for senior dog adoption. The 15-year-old Shih Tzu was adopted from a shelter at age 11 and has since become one of the most famous doggies on the web. Her famous friends include: James Franco, Joe Jonas, Tina Fey, Jonah Hill and Miley Cyrus.

This well-dressed, well-groomed Maltipoo is the self-professed “Bob Ross of dogs”. With a name like Agador (and a matching hashtag #agadorable), you already know this dog is super-sassy.

Geordi had a playdate with two of his girlfriends this morning so he's pretty thrilled.

up to no good … keeping human on her toes.

Back in 2009, Boo the Pomeranian became known as the cutest dog in the world. With over 17 million Facebook likes (!!!), Boo introduced the world to the idea of a “viral” pooch. Boo shares an Instagram account with his equally adorable brother, Buddy.

#tbt when Tuna was featured in an issue of @glamouruk wearing this dope @loewe fish necklace that was almost the same size as his body. #thuglife #glamour #?

With a notable overbite and recessed jawline, Tuna has captured the hearts of 1.8 million followers. The rescued Chihuahua and Dachshund crossbred is a bonafide Internet celebrity, with a book titled Tuna Melts My Heart: The Underdog With The Overbite.

You might recognize Maru from that popular doge meme, but the famous Japanese pooch is actually a different Shibu Inu. TIME Magazine named Maru the world’s best dog, which, you know, is a pretty big deal.

"Feeling like a #hypebeast in my Pupreme sweater" Thanks @sneakerssays for keeping me looking fresh! #bogo

A post shared by SirCharlesBarkley the Frenchie (@barkleysircharles) on Feb 11, 2017 at 9:46am PST

Sir Charles Barkley the French Bulldog rocks a lot of swag—and he’s pretty much always smiling about it.

Photography via Instagram/@zorzorbaby
Get the best of FASHION in your inbox Thanks for signing up!
The latest fashion, beauty and celeb news delivered right to your email #FASHIONforall Now, check your inbox to complete your subscription
We won’t ever use your email address for anything else
Want even more FASHION? Follow us on social media.