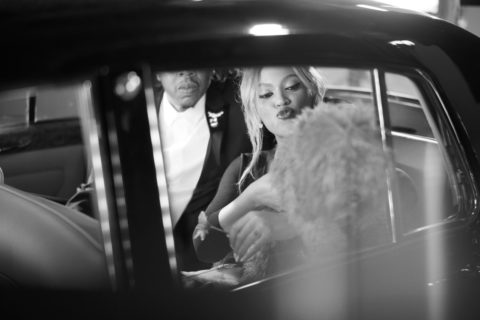 Beyoncé and Jay-Z Go On a Date with Tiffany & Co.

A love letter to NYC, the film offers a glimpse into the playful side of the couple.

Who wouldn’t want want to sit in on a date with Beyoncé and Jay-Z? Tiffany & Co.’s just-released “Date Night” — a bonus film to its September “About Love” campaign — chronicles a night out with the notoriously private couple. A love letter to NYC, the short includes references to Breakfast at Tiffany’s in line with the previous film, as well as plenty of black and white footage to set a sultry mood. However, the true star is Beyoncé and Jay-Z’s daughter, Blue Ivy, who crashes the romantic evening, offering viewers a glimpse into the playful side of the powerhouse duo.

On this project, Beyoncé is reunited with Ghanaian-Dutch director Emmanuel Adjei following their previous work together on 2020’s visual album ‘Black is King.’

In addition to the film, the jeweller has partnered with BeyGOOD and the Shawn Carter Foundation to create the Tiffany & Co. About Love Scholarship Program. Tiffany & Co. has pledged USD $2M in scholarship funding for students in the arts and creative fields at Historically Black Colleges and Universities (HBCUs).

“Date Night” follows another dreamy Tiffany & Co. short featuring the couple. We don’t doubt that Beyoncé and Jay-Z’s day-to-day is filled with private jets, chauffeured cars and lots of bling, which is why the intimate one-minute “About Love” film could probably double as a documentary.

In the video for the recently released campaign, Queen B sings “Moon River,” the song made popular by the 1961 film Breakfast at Tiffany’s, while singing towards Jay-Z on a private jet (not quite the “two drifters” that Audrey Hepburn sang about in the film while sitting on a window ledge looking out onto a fire escape). Just before the Tiffany & Co. short closes, Beyoncé pulls up in a chauffeured car to reunite with her hubby at Orum House, an architectural masterpiece overlooking Bel Air.

Another clip has Beyoncé tinkling on a grand piano, while the 128.54-carat Tiffany Diamond dangles down her back. That would be the same mega rock that played a starring role in the Tiffany & Co. print campaign released in August. Jay-Z, who in one scene watches a home video he shot of his beloved in (where else?) a private screening room, wears cufflinks reimagined from the legendary Jean Schlumberger Bird on a Rock brooch.

Tiffany & Co. describes the film as “stripped down and raw, capturing the Carters’ indescribable chemistry through stolen moments of intimacy.” The longing felt between the film’s co-stars is tangible as they share various tender moments.

Photography courtesy of Tiffany & Co.
Get the best of FASHION in your inbox Thanks for signing up!
The latest fashion, beauty and celeb news delivered right to your email #FASHIONforall Now, check your inbox to complete your subscription
We won’t ever use your email address for anything else
Want even more FASHION? Follow us on social media.