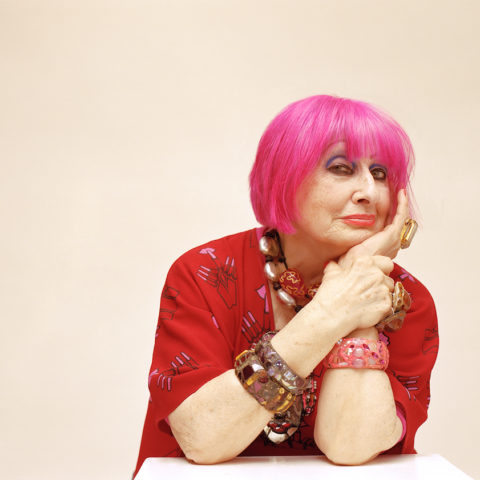 British textile and fashion designer Zandra Rhodes is celebrated for her artistic prints, electric hues and floating chiffon designs that span her career of over 50 years, and her name is etched in fashion history. The same could very well be said about her neon-pink bob and rainbow-hued makeup — two longtime signatures that make her immediately recognizable and mirror the vibrancy of her fantastical collections.

“Pink is a very happy colour,” Rhodes says about her trademark hair shade over Zoom, her computer screen offering a glimpse inside her hot-pink London apartment. It’s located above the bright orange and (yes, you guessed it) pink Fashion and Textile Museum, which she founded in 2003. The vivid paintings, ceramics and furnishings that surround her are proof that her personal lifestyle is as glamorous and extroverted as her designs.

Rhodes says that she has been rocking fuchsia tresses since the ’80s and maintains the look by using Crazy Color Semi-Permanent Hair Color Cream in “Pinkissimo” every two weeks. Recalling one point in her hair history, she mentions a flirtation with dyeing her hair and experimenting with “things like green streaks and feathers stuck on the ends with eyelash glue.”

As for her makeup, you can always count on seeing Rhodes with thick black liner accentuated by generous sweeps of blue eyeshadow on her eyes and “a bit of rouge” on her cheeks. Where she’ll leave herself some room to play is with her lips — “I tend to mainly wear pink,” she notes about her bold lipstick shades — and eyebrows. “I’ve had wiggle lines, dots and dashes, she says of her evolving brow game. “At the moment, I just draw them on with a brown pencil.”

One of British fashion’s most-loved characters, Rhodes started her career in textiles by selling her vivacious prints directly to designers. But after struggling to get orders and being told that her work was too extreme, she decided to set up her eponymous label in 1969. “I was creating stars, explosions and lipsticks and designers wanted something else that wasn’t me,” she explains. “I felt I had something different to add to the world.”

She rose to fame in 1977 with the release of her Conceptual Chic collection, which introduced rebellious rips, safety pins and sink chains influenced by London’s street culture to the socialite set. The groundbreaking assortment earned Rhodes the nickname “Princess of Punk,” and over the next several years, she became one of the United Kingdom’s go-to celebrity designers, dressing the likes of Princess Diana, Freddie Mercury, Elizabeth Taylor and Diana Ross.

A major career highlight came in 2015, when she was named Dame Commander by Princess Anne. And true to her flamboyant style, Rhodes turned up at Buckingham Palace that day in a vibrant blue ensemble and a hat decorated with a rhinestone egg.

Today, at 80 years old, Rhodes isn’t showing any signs of slowing down, even in the face of the coronavirus pandemic and a cancer diagnosis last year during lockdown. (She’s now in remission.) On top of her other projects, like venturing into the world of home products for an upcoming collab with Ikea, she is the creative ambassador for a touring public art installation called Gratitude that aims to celebrate the front-line workers of the National Health Service (NHS), England’s publicly funded health-care system. Set to launch in Birmingham this summer, the project involves creatives from across the United Kingdom (Rhodes included) showcasing their talents in human-form sculptures that will later be auctioned, with the proceeds donated to the NHS.

As for something that has personally helped spark joy for Rhodes during the stress and uncertainty of the pandemic? “Makeup,” she immediately responds. “I never move around the house or go out without it. Makeup is self-expression. It makes me feel right for the world.”

Photography by Richard Dowker
Get the best of FASHION in your inbox Thanks for signing up!
The latest fashion, beauty and celeb news delivered right to your email #FASHIONforall Now, check your inbox to complete your subscription
We won’t ever use your email address for anything else
Want even more FASHION? Follow us on social media.