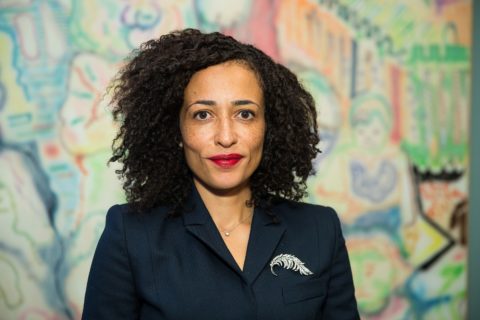 Earlier this week, Zadie Smith shared the story of how she explained the difference between men and women’s beauty routines to her young daughter.

“I explained it her in these terms,” she said at the Edinburgh Book Festival. “You are wasting your time, your brother doesn’t worry about any of this. Every day of his life he will put a shirt on, he’s out the door, and he doesn’t give a shit if you waste an hour and a half doing your makeup.”

“It was infuriating to me,” Smith continued. “I decided to spontaneously decide on a principle: that if it takes longer than 15 minutes, don’t do it. From what I can understand from this contouring business, that’s like an hour and a half and that is too long.”

Which, like, fair. The author elaborated that her revelation came after noticing her seven-year-old had begun to take an active interest in the mirror, so she laid out her rule in terms of practicality. At some point, she also allegedly mentioned the girls are “fools” to waste time on beauty. And as a result, a lot of people were not impressed.

But the thing about Smith’s comments is that they’re rooted in her own belief system. She’s also right about most men not caring about their skincare routine or what foundation to use. Some of us (hi) were only allowed to wear clear lip gloss and nail polish until eighth grade, and I can’t imagine trying to explain to my late grandmother why contouring was something I felt I needed to do without being lectured on how wrong I was. Plus, Zadie Smith is free to parent however she likes. And while I’m not here for makeup-shaming (or any shaming), there’s also an argument to be made about the way she’s teaching her daughter about the reclamation of time and energy.

Ultimately, there’s no right or wrong way to apply or wear makeup. If you want to contour daily, go for it, and know that I’m jealous you even know how. But when Smith explains that she uses the concept of saving time to instill values in her daughter, it’s important to note that there’s something valuable in that. If you’re brought up to acknowledge beauty and makeup in a realistic and practical way, you’ll develop a healthier relationship to it and introduce your own takes, products, and approaches on your own schedule. This means that instead of Smith’s daughter believing she “needs” to use makeup, she’ll choose experiment with it because she wants to. Or not. It’s her call.

Introducing systemic norms to a child isn’t easy. (Hell, it’s hard introducing them to an adult). So as grown women, we know how easy it is to fall into the trap of believing we “should” look a certain way or “should” use products we’re told we need. Smith didn’t need to call women who take time with their makeup foolish, but by introducing beauty norms to her daughter in a simple way that hinged on saving time, she created enough space for her daughter to develop her own relationship with makeup and beauty the older she gets. Because if I know anything about being a former teenager, it’s that they’re going to do what they want, regardless of what their mom says.