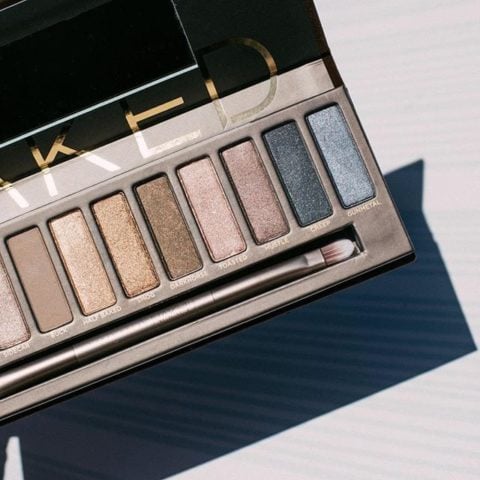 When it came time to purchase my very first palette—previously I’d only owned a couple of single MAC eyeshadows in teal blue that I (mistakenly) thought I looked cool in—I didn’t even have to consider my options. Because at that time, there really only was one option. One palette to rule them all: The Urban Decay Naked palette. With twelve pans of shadow, it was the perfect product for any type of look and any type of woman. From warm chocolatey shades, to frosted pinks to a deep sparkly black, this velvet-covered palette was all you needed. Dependable and versatile, it became a makeup staple.

But yesterday, the makeup brand shocked the beauty community when it announced they would discontinue the iconic product. The shock factor came less so from the loss of eyeshadows (there have been a ton of neutral dupe palettes released in the years since) but more so from the loss of something near and dear to many people’s hearts. This is a product that holds sentimental value more than any other, and for a lot of people, the Naked palette was a gateway product and an introduction into the world of beauty.

It’s safe to say that people are pretty sad.

RIP the Urban Decay Naked palette – with me through the intense school disco nights with lids matted in intense 'Creep', hungover eyes hidden with 'Sin', makeup disasters averted with a sweep of 'Half-baked'. You will be missed x

Urban Decay is discontinuing the first palette I ever ever bought. The first makeup purchase that really made me FALLLLLLLLL in love with makeup ??? idk how to handle this

so sad that urban decay are discontinuing the original naked palette ? half baked on the lid and dark horse in the crease will forever be a look ??

This is also a mood:

wow urban decay naked palette is being discontinued after 8 years and i just began crying??? i don't even use it???? i just feel kind of old???

There’s a (gunmetal) silver lining to this cloud, however. As a parting gift, Urban Decay is slashing the price of the OG Naked palette in half, both in stores and online. And there’s comfort in the fact that the brand is giving its baby the “extra-af” funeral it deserves.

Today, we mourn our beloved original Naked Palette, a revolutionary product that changed the beauty industry forever ?? A little bit naughty, often dramatic, and always in the press, the innovative game-changer and category creator will be laid to rest after 8 years. The funeral is being held today in Newport Beach, CA with badasses and beauty influencers alike. @kandeejohnson, @christendominique, @katy, @makeupshayla & @chrisspy will all be in attendance, with a eulogy by @nicolerichie. Click the link in our bio to see the entire sendoff on YouTube. #UrbanDecay #UDNaked #Makeup #Beauty

So why is Urban Decay pulling the palette? It’s not entirely clear, but based on the overwhelming amount of product out there and the many documented dupes, it’s probably not selling as well as it used to. Even my own palette has been sitting in the bottom of my drawer unused for some time now. But despite that, it’s still something I haven’t been able to let go of.

Overall, it’s been an intense week for the beauty community. From ugly Twitter dramas to lengthly apology videos, the loss of this palette is just one more blow.

So if you’re really struggling with the prospect of saying goodbye, make sure to stock up on a fresh Naked palette before they’re all gone forever. Thanks for the memories, Urban Decay. It’s true what they say, nothing gold can stay, not even ‘Half-baked’.