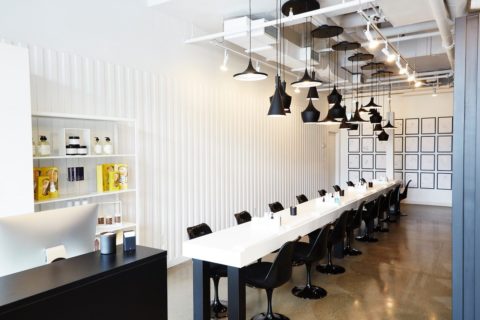 I first noticed Tips Nail Bar in 2006. Located above a salon at Danforth and Jones in Toronto, it caught my eye as I drove by because until then, there was nowhere to get nail services in my neighbourhood. I had been going to a downtown spa to get pedicures and I didn’t even bother with manicures because they never lasted and seemed like a waste of money. I eventually visited but I still wasn’t a regular until 2010, when I wrote about their dry manicure, which convinced me that painted nails could last longer than five minutes.

Around that time, nails were trending hard. Nail art was on the rise, beauty brands who’d never dabbled in polish before were suddenly coming out with them, and in Toronto, word about Tips was spreading fast. Owned by Leeanne Colley, it slowly but surely became the go-to place in the city because Colley and her team not only gave amazing service but their nail skills were next level. Toronto Life even described Colley’s hands as so steady she could have been a surgeon. Soon they were creating nail looks backstage at Toronto Fashion Week, beauty editors were booking in on the reg, and Colley got signed to beauty agency PM1. To say that Tips changed the nail game in Toronto would be an understatement.

Tips grew in 2013, moving into a new space downstairs that could accommodate nine manicure stations and six for pedicures, with Colley always hiring and training the best nail techs she could find. Working mostly with longer-lasting gels rather than regular polish, everyone on her staff is adept at any design you request and if you’re stumped for an idea, they even have a menu of looks to choose from. Once you become a regular, the familiarity of the staff starts to become something you expect. And that’s precisely why whenever Colley was asked to consider opening another location, she would shut down the idea. “I thought it was going to be really tricky to have two locations and replicate it,” she says. “You can have an amazing place but if you don’t have a great team, there’s no way you can offer the same kind of consistency.”

But eventually, she came up with a solution that changed her mind. Yes, it’s happening: Colley is opening the doors to a west-end location on Dundas West next week and there will be at least one familiar face from the senior staff every day, including Colley. There’s no question the new spot will be booked solid; in January alone, Tips had 57 requests for directions to the Danforth location from that Dundas postal code. The 1600 square foot space will offer all the same services plus the addition of a mani-cam, which has been two years in the making. “It’s a really cool thing that no other nail bar has,” says Colley. Just like the woman herself.

Tips’ second location at 1243 Dundas St. W. opens officially on April 24th but bookings can be made now at tipsnailbar.ca