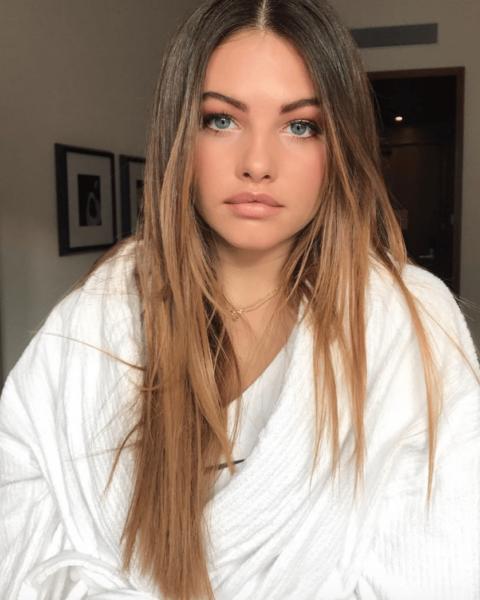 Thylane Blondeau: Everything You Need to Know About the ‘Most Beautiful Girl in the World’

French model Thylane Blondeau‘s journey to stardom is an interesting one. The 16-year-old beauty first came into the spotlight at the tender age of 10, when her Vogue Enfants shoot came under fire for being “too sexual.” But with the controversy came plenty of interest, and many people wanted to know more about the child dubbed “the most beautiful girl in the world.”

Flash forward six years and Blondeau is still a successful model and bonafide Instagirl, having nabbed gigs with L’Oréal, Dolce & Gabbana and solidifying a major social presence for herself on Instagram, YouTube, Twitter and Snapchat.

Here’s what you need to know about Thylane Lena-Rose Blondeau:

1. Her parents are famous

Thylane is the daughter of former international football star, Patrick Blondeau, and French actress and television personality, Véronika Loubry. Her parents split in 2016. Blondeau also has a younger brother, Ayrton-Romeo Blondeau, who seems to be a big fan of his sister’s, at least according to his Instagram. And while her mother wasn’t officially a model, judging from throwback images Thylane posts of Véronika, you can tell she got her skills from her mama.

2. She walked the Jean Paul Gaultier runway when she was four

3. And had her first photo shoot at age seven

Thylane signed with IMG models in 2015, and since then, her modelling career has skyrocketed. She’s covered Jalouse magazine, starred alongside Zendaya, Lucky Blue Smith and Presley Gerber in Dolce & Gabbana’s millennial-themed spring/summer 2017 campaign, walked the runway for Tommy Hilfiger and Dolce & Gabbana and is a brand ambassador for L’Oréal.

5. She’s an actress, dancer and musician

In 2015, she appeared in a film called Belle & Sebastian: The Adventure Continues. In a YouTube video, she also revealed she dabbles in classical and modern dance, singing and playing the piano and drums.

A couple of years ago, Thylane was actively vlogging on YouTube, however, her original account with her vlogs are no longer available. Her old videos, including her “everyday makeup routine” and “25 Facts About Me,” currently live on a YouTube fan account, thylaners (which is the moniker her fans use for themselves). She does seem to have a new account, though, which features a mini film called THYLANE, which sees her dancing, running through a lavender field and contemplating in the rain.

My Chanel outfit ? Thanks so much @chanelofficial @karllagerfeld #chanel

9. She walked the Cannes red carpet at 15 years old

Today was My first red carpet and I think it was the most amazing experience ever ..thanks everyone for support thanks to @chapuyc and @lorealmakeup @lorealhair for giving me the chance and the great opportunity to work with a FAMILY … #blessed #lorealcannes2016 @karimrahmanmakeup Thanks to my great agency @imgmodels and my agent marine ?❤️ #jimmychoo

As a “friend of L’Oréal,” she made her Cannes debut in 2016. And now that Thylane is officially part of the L’Oréal family, we have a feeling we’ll be seeing plenty more of her at the French film festival.

10. She bears an eerie resemblance to Barbra Palvin

She even refers to the model as “her twin.”

Photography via Instagram/thylaneblondeau
Get the best of FASHION in your inbox Thanks for signing up!
The latest fashion, beauty and celeb news delivered right to your email #FASHIONforall Now, check your inbox to complete your subscription
We won’t ever use your email address for anything else
Want even more FASHION? Follow us on social media.