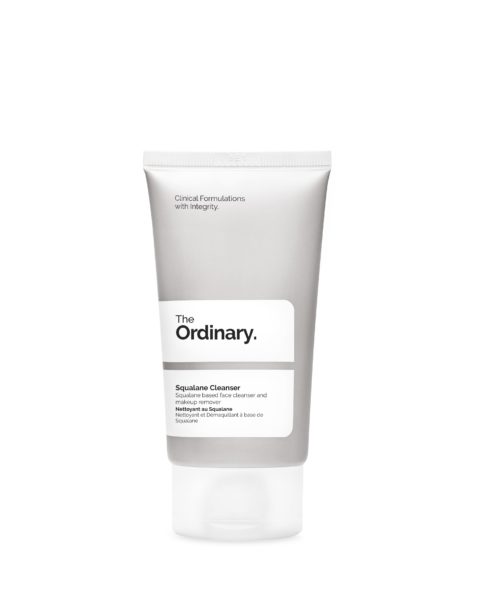 The Ordinary Launches Their First-Ever Cleanser

Ten years ago, if you didn’t wash your face with a foam or gel (we’re looking at you, Neutrogena), you were in the minority. But in 2019, we’re firmly in a new era of facial cleansing—one that’s far more leery of stripping the skin of what we now know to be important natural oils. Today, affordable skincare line The Ordinary will launch its first-ever cleanser for less than $8 and because they know what’s up, it’s a cream-slash-oil cleanser, aimed at melting makeup and impurities away rather than stripping them via harsh soaps. The cream formula is meant to be applied to dry skin, rubbed in for around 30 seconds until it melts into a balm and then washed away with water. No skin-tightening aftermath. Just cleansed, serum-and-moisturizer-prepped skin.

Squalane, a star ingredient of late, is the basis of the Toronto brand’s inaugural face wash, and one its already embraced. It serves as the basis for several of The Ordinary’s retinoids and hydrators, and has become a particularly popular option in the face oil category in general for its light, easily absorbable texture. Part of its appeal lies in the fact that it’s a naturally occurring oil, meaning that our bodies already produce this precious lipid. (However, after around age 30, our bodies start producing less, which is why those topical top-ups can be so effective.) Often derived from olives, sugarcane, wheat germ or rice bran, the fact that it’s shelf-stable—i.e. won’t go rancid while sitting in the oft-humid environment of a bathroom medicine cabinet—makes this saturated oil even more attractive to skincare companies. Indie Lee has a particularly popular one, as does Peter Thomas Roth and Biossance. Kiehl’s cult-status Midnight Recovery Oil is largely made up of squalane, and it also plays a leading role in Herbivore’s highly addictive Lapis Oil and Laneige’s Water Bank Moisture Cream.

As a cleanser, the one thing squalane has going for it is its inherent antibacterial properties. It’s also an antioxidant, non-comedogenic, and proven to protect against UV damage. All in all, it’s a solid base for a daily cleanser, and if the hype is to be believed, The Ordinary has given all of us budget-sensitive skincare addicts something to celebrate.