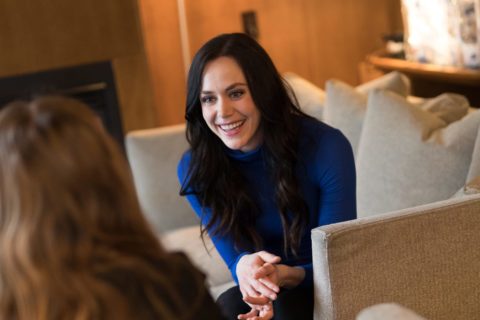 "Anyone who says they saw potential in [me and Scott] is lying. We were brutal. We were small and cute and felt awkward about holding hands."

Tessa Virtue is Canada’s ice-dancing darling. Between her poised perfection on skates, her cheeky social media presence, and her jaw-dropping beauty, what’s not to love? (Okay, we’re not crazy that she won’t confirm the details of her relationship with Scott Moir. But we’ll let that go for now.)

She isn’t flawless — and when I suggest she is, she insists that “it’s your flaws that make you so special” — but sitting next to her is the closest I’ve ever been to an angel. She radiates kindness, enthusiasm, comfort, grace and every other positive personality trait that warms you from the inside.

And so, it was only a matter of time before companies starting rolling out the sponsorship deals. This month, our skating sweetheart was named the first-ever Canadian brand ambassador for Nivea. “Canadian Ice Dancer and Olympic Gold Medallist, Tessa is a glowing example of how to feel good in your skin,” said the partnership announcement. With a glowing complexion and a radiant smile, Tessa shares her thoughts on Canadian pride, the public eye and loving herself from the inside out. And of course, I asked about Scott Moir.

You had that amazing “the struggle is real” tweet go viral post-PyeongChang. People obviously love you on ice, and now they’re loving you on social media. Will we get to see more of that now that the Olympics are over?
It’s a special way to connect with fans. That was a different experience this time around with the Olympics. Neither of us was on social media for Vancouver or Sochi. Most of the time we’re in our own protective bubble. We’re in a blackout. It was really special to feel the love and support and share our special moment with so many people worldwide. That’s the beauty of social media.

Everyone really wants to see more of you, and social media definitely helps with that.
I’ve always been such a private person. Even stepping into social media was a new world for me. [I had to] find that balance of feeling the love and support and feeling like it’s a safe place to open up and let people in, while maintaining an element of my life that’s quiet and all my own.

Has it been hard balancing the private and public? I think your life has been more public over these Olympics than ever before.
I’m not sure. We’ll have to see over the next little bit how we navigate that. The people I interact with on a daily basis, that hasn’t changed. That helps maintain the normalcy. From an athlete’s perspective, we can step in and out of that. I know when I walk into an arena, I’m in public territory. But Canadians are so polite; people are very respectful of our personal space.

During the Olympics, people kept saying, “For those four minutes Tessa and Scott are on the ice, everyone in the world wants to be Canadian.” Between you, Drake, and Justin Trudeau, Canada is really having a global pop culture moment right now. What’s it like to be part of that?
It’s so unifying. You do sense this different level of pure Canadian pride. You see the maple leaf and it’s emotional. Marching into the opening ceremony, I was so grateful that we come from a country that stands for diversity, inclusion, and fairness.

You definitely made us proud.
That’s the best compliment!

You’re the first Canadian Nivea ambassador. What does that mean to you?
It’s surprising. It’s the number one skincare brand in the world. Obviously the products speak for themselves, but it’s more so what they stand for and their core values as a company. This whole movement of feeling good in your skin. Confidence and the idea of knowing what you want and going after it and having that fearless, limitless sense of self.

I think Huffington Post broke the news. They said, “Of course she’s the ambassador; she’s flawless.” Flawless is a word people often use to describe you. How do you feel about that?
“Flawless” is an unattainable thing. We’re in a world and a society where we’re all striving for this perfection that doesn’t exist. What I love about Nivea is they’re all about authenticity. The brand isn’t pretending to be anything it isn’t. I think that’s what they want in their buyers and in their consumers. It’s all about embracing who you are. It’s those unique qualities that I find most endearing about people. “Flawless” is a flattering thing to hear but at the same time I’m not sure it’s at all in line with what I’m trying to send out there.

When you and Scott were seven-years-old, did you ever think, “I can see the two of us becoming the most-talked-about skaters in the world”?
No. Anyone who says they saw potential in us is lying. We were brutal. We were small and cute and felt awkward about holding hands. It wasn’t until one month before the Vancouver games that I thought, “We can do this.” I was late to the party on that.

Was Scott like that too?
He had much more confidence in our ability earlier on. I think when they announced the Vancouver games, he was like, “We’re going to be there. We can win.” That’s why we balance each other out.

What other ways do you balance each other out?
He’s very emotional, temperamental, and fiery. I’m extremely even-keeled. My mood and the way I adapt throughout the workday is very dependent on Scott. I’m just complementing him. Having that extremely balanced nature is probably one of our strengths.

Can you walk me through your nighttime and morning routine—what’s the first thing you do when you wake up?
I’m so diligent with training. And funnily enough, with skincare I’m the same. It’s how you present yourself to the world and how you feel about yourself. I’m very minimal in the products I use. My mom always taught me to touch my face as little as possible and not use many products. Micellar [water] is the easiest because you don’t need water. It takes off your makeup, it cleanses, there’s no residue—it’s easy. Have you tried the Q10 plus C? It’s phenomenal. I need to get eight or nine hours of sleep every night. I can’t operate on less than that. Part of my job competing was getting rest, having naps, and staying hydrated.

Do you go to bed early?
I’m such a night owl but we skate early so I had to shift my routine. I’m not a morning person at all. Scott always jokes that I don’t say a word until after 11AM. We start training early at 6 or 7 so I’m quiet for the first little bit. He’s such a morning person.

Photography courtesy of Nivea
Get the best of FASHION in your inbox Thanks for signing up!
The latest fashion, beauty and celeb news delivered right to your email #FASHIONforall Now, check your inbox to complete your subscription
We won’t ever use your email address for anything else
Want even more FASHION? Follow us on social media.