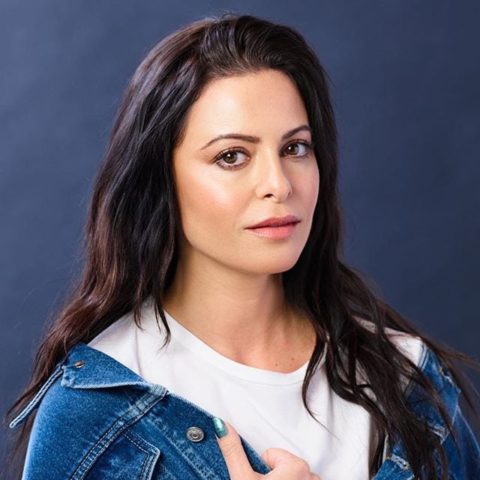 Shoppers Drug Mart is gearing up for another Be Bold with Beauty campaign and who better to get involved than Sophia Amoruso? At just 22 years old, she was already taking her first steps towards creating an empire, transforming an eBay store of vintage finds into the ultimate online treasure trove for cool girls, Nasty Gal.

The metamorphosis between the two domains was pretty swift, earning the young businesswoman names like the “Cinderella of tech” and a spot on Inc. Magazines‘ 30 under 30 list. In fact, Forbes even named her one of the richest self-made women in the world. But the skyrocketing speed at which Nasty Gal was born ultimately ended with bankruptcy in 2016.

Now, at 34 years old Amoruso has refused to be buried, carrying on in the face of adversity and charting a new course focused on Girlboss Media, her new company. A lot has changed since she wrote her New York Times bestseller. In fact, her whole definition of what it means to be a “girlboss” has changed. We sit down with Amoruso to chat about how change isn’t always a bad thing—whether it be in life, in your career or simply in your beauty routine.

Why do you think you’re a good fit for Shoppers Drug Mart’s Be Bold with Beauty Campaign?

I’ve always been bold in my career and I’ve had a very loud career. I mean, there’s a Netflix show made about my life, which is crazy. And Nasty Gal, even though I’m not involved anymore, was bold. About as bold as you can get.

I still consider myself bold in my style and in my beauty looks, but I have a little more restraint now when I choose a lip or an eye and maybe don’t layer leather on leather on platforms. I don’t just dump jewellery on myself now. So it’s been nice to have this evolution and it’s important for me and for Girlboss, which is my new company, to encourage women to be bold and to get out there and demand what they’re worth and to discover themselves by trying new things and taking action.

I think I’ve always worn makeup. From the time I was 11 I was sneaking mascara onto my face at school. I had no idea what beauty meant, I called it makeup. And I had my compact and I powdered my stinky compact on my face and you know, thought that that was what I should be doing. Beauty has become a lot more sophisticated. There’s so much more education online on what products the pros are using and how to apply them and not look like a clown, which is very easy to do! You’re putting colour on your face! Especially living in Los Angeles; it’s a place that will teach you about personal hygiene like no other.

The campaign’s goal is really to get people stepping out of their comfort zone. Talk to me about a time you did that.

Every day I step out of my comfort zone and it’s in small ways. It’s in the ways that everybody experiences every day. It’s in showing up and doing the job that I know I’m supposed to and wondering if I’m qualified—which we all probably do every day no matter how much experience we have.

I think making the transition from Nasty Gal to Girlboss, I mean it was almost immediate… I didn’t stop or take a break. That was a bold move and people were just shocked that I kept going and were like, “You’re so resilient” but I just kept going. It’s not that hard to do if you just do it, even though it’s way scarier doing it after having such public successes and setbacks as an entrepreneur. But Girlboss is too important to me to just sit on and it feels like it’s my purpose and that makes it an easy thing to do.

So how did you come up with the idea for Girlboss?

I wrote the book while I was building my fashion business in my 20s—I started it when I was 22 years old. I was in it for ten years and it was in 2014 that it kind of took on a life of its own. I really wanted to write a business book that would be the gateway drug for a girl who maybe didn’t have the pedigree of most of the women who were writing books. I’m a community college drop out and I shouldn’t be qualified to run a business… and I’m probably not. But who is? And I wanted to inject a sense of fun and humour into a business book. And I wanted it to be a relatable way for a generation of women who are unlikely entrepreneurs like myself, who have all the digital tools at their disposal, to take risks and be bold and be entrepreneurial, whether on the inside of a company or starting something from the ground up.

Girlboss shares a lot of articles and stories, but what makes it  different from, say, a traditional media outlet?

I mean digitally, we’re not really selling banners and boxes. All of the work that we do with brands is with brands we feel strongly about. And programs that we do with those people and those brands all create value for our user, for our community, for ourselves and for them. So we’re using the powers that be to bring education and utility and connections to women that may not have them otherwise. And we’re sharing content that isn’t news–there’s plenty of news out there–we’re sharing content that can really, very incrementally, inspire and educate our audience on how to make small steps in their lives, whether it’s saving a little bit more money or asking for that raise they know they deserve.

And I know you also do meet ups…

You just had one in April. Can you tell me a bit more about those events?

So we’ve done three Girlboss Rallies. It’s a conference. We had 800 women at the Los Angeles rally in April, we’ll have more at the New York rally in November and we generally have around 50 speakers. Everyone from Gwyneth Paltrow, to Sallie Krawcheck, to Ashley Graham, to Elaine Welteroth have all spoken and it’s a way for the community that, you know, has read Girlboss, is subscribed to our email list, who is inspired by what we’re doing to meet one another. And content aside, what happens on that stage is one small part of what happens there. It’s really about finding community and meeting maybe your next co-founder in a way that’s maybe hard to do online. And long term we want to figure out a way to bring that online and for women to make those bold moves to meet one another and level up their game.

Where do you see Girlboss going in the future? Do you see it developing further?

I think the digital piece of what we’re doing is more infinitely more scalable than a conference or editorial, which is limited to the number of editors that we can employ. So it’s creating a place where our community is creating content for one another and sharing their learnings, because what they know is as important as what we have to share and there is so much more to share when you bring like-minded women together.

In the future do you ever see yourself revisiting something like Nasty Gal?

I think maybe I would go into fashion. It won’t be any time soon. I mean, I love fashion and I’m sure we’ll work with fashion brands in the future, but it’s been nice to take a break. Our inventory is also infinitely scalable if you think about what it is that we’re selling. It doesn’t have to be in a warehouse and it doesn’t have to go on sale and you can’t ship it late and you don’t get returns and the things that were the bane of my existence for a decade. Retail is really hard. And it’s a difficult time for fashion to feel important, even though it is, but there’s so much going on in the world… focusing on Girlboss right now feels really good.

Do you miss any part of it?

I do miss making products. I miss the physical part of it. I pay way less attention to fashion, but I do miss it. Whatever it would be, I do want to get into commerce again eventually.

Do you think your definition of being a girlboss has changed since you first coined the term?

Yeah, I think it’s evolved and it’s a little more complex now. It’s taking into account everything that’s happening in the world and in culture and in representation. I had a very small view of the world; it was a different time. At the time, just saying “badass” was all you needed to do and now “badass” just feels really played out.  And so I’ve evolved, I’ve become more sophisticated. You know, I was quote-on-quote winning when I wrote that book and a lot has changed since then and a lot of the advice I gave I wouldn’t necessarily agree with today. I hope that everyone who reads that, and who gets any advice from anybody, throws half of it away and remembers that the experience of people giving you advice and what you know about yourself and what’s right for you are very different things. It may always work for them but it doesn’t mean it will always work for you.

Why do you think the beauty industry is booming right now?

Oh my god, it’s massive! I’d say that there’s a very underserved market in beauty. It’s become a lot more inclusive. The legacy powers that be are finding themselves scrambling to innovate as more and more companies have access to social media to build their businesses. Urban Decay is an example of that. They’ve just built a massive business. And there’s a rise in clean beauty. I love RMS, I use it every day. I think fashion has become a lot more subltle and conservative and beauty is still something we can take a lot more risks with and be a lot more bold with.

You mentioned RMS, what are some of your other favourite brands?

For mouisturizer I use Emryolisse. I love Bioderma, just finishing up my cleansing with that. I love Chanel’s foundations. Guerlain feels very cool and classic. I don’t know how to say it… I think everyone here can say it in a more French way than I can. And I mean Nars is tried and true, the best pigments around…

So what’s your every day look?

I use anything in a pot. Anything that’s a cream. I like using my fingers. I don’t think I’m necessarily an expert at it, but I kind of don’t care. And like a simple eye with a bold red lip. You can wear it with denim, you can wear it with all black and you just look cool.

I know, I know… I’ve definitely carried that over from Nasty Gal.