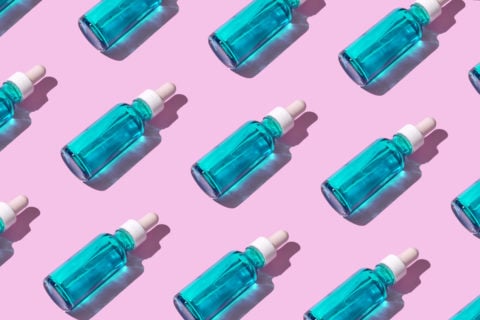 Is a Simple Skincare Routine Better For You (And Your Skin)?

A growing number of beauty brands are opting out of the multi-step skincare method and choosing to go low.

When Into the Gloss launched in 2010, the beauty site inadvertently developed a formula for every stylized medicine cabinet photo (lovingly referred to as a “top shelfie”) that has graced Instagram since then. Each snap must include serums (at least one for each day of the week—bonus points if you know what they all do), a handful of jars of moisturizer lined up in a row and enough facial cleansers to remove the makeup of a small village each night. Maximalism took hold, and in 2019, skincare sales surpassed makeup sales for the very first time in Canada, according to market research firm NPD Group. This was to be expected, given the massive popularity of the Korean beauty multi-step routine (which encourages the use of everything from multiple cleansers to serums, creams and oils) that hit North America six years ago. Today, a quick Google search for “10-step skincare routine” yields a staggering 31 million results.

However, for every hour-long skincare regimen devotee, there’s a Marie Kondo-esque brand founder urging consumers to choose just a few high-quality products instead of amassing a vast collection—the same way one should, if possible, invest in a well-made shirt rather than fast-fashion items that will soon unravel. Due to a combination of savvier-than-ever skincare consumers, growing concerns over the environmental impact of beauty consumption and global economic instability, the once-alluring glow of shelves jammed with jars is starting to dim.

Jennifer Brodeur, the Montreal-based founder of JB Skin Guru (and facialist to Michelle Obama and Oprah Winfrey, among others), has always been a skincare minimalist. Brodeur worked and taught in the beauty-aesthetics industry for over 20 years before launching her brand in 2016. To keep skin healthy, she stresses the importance of just three things: sleep, proper cleansing and the use of soothing ingredients to bring down inflammation. One of the main culprits of inflamed skin? Using too many products, particularly overly aggressive exfoliants. “I was incessantly criticized for my philosophy,” says Brodeur. “When I was working at a skincare clinic, I was told by the owner that I would never succeed because I wasn’t selling enough.” But Brodeur had no interest in promoting a multi-step regimen that she wouldn’t use herself. “I’m a two-step- or three-step-max kind of gal.” Four years after its launch, JB Skin Guru has nine products in its lineup and two more in the works. “That’ll probably be it for quite some time,” she says.

The minimalist approach adopted by Madison and Matthew Ruggieri, the sibling duo behind the recently launched unisex brand OneKind, is a result of their background in men’s skincare. After launching two product lines for men, the siblings realized that those brands were also attracting a female clientele. “I think women appreciated that our collections were curated and we were only selling exactly what the consumer needed,” says Matthew. “If a male consumer doesn’t understand a product or need it on a daily basis, he’s not going to buy it.” They applied these learnings to OneKind, which launched in the fall of 2019 and currently has three products in its lineup: a retinol serum, an exfoliating mask and a nighttime moisturizer. “Every product has to have a clear place in someone’s routine; we’re never going to be a brand that has an endless scroll of products on our site,” says Madison.

Three seems to be the magic number for up-and-coming tightly curated brands. After years of suffering from cystic-acne breakouts, Neada Deters, a former communications associate at Vice and former editor at Doré, launched Lesse in 2018 once she moved from Australia to New York. During her time as an editor, she found herself interviewing dermatologists and aestheticians who spoke highly of a simple skincare regimen. Those learnings, combined with her confusing (and ultimately failed) search for good organic skincare products, led Deters to start mixing ingredients in her kitchen before she partnered with the Canadian farm that now grows and manufactures all of her products. Today, the brand sells only a serum, a mask and a cleanser, although Deters has plans to add more to the lineup, albeit slowly and steadily. Now based in L.A., Deters says she never wants “to undermine all of the amazing things our skin naturally knows how to do, like exfoliating or healing itself; instead, we’re asking how we can support it so it thrives every day.”

Jordan Samuel Pacitti, a ballet dancer turned aesthetician turned founder of the Instagram-famous brand Jordan Samuel Skin, says he often sees customers disappear for six months to a year before returning to his brand to embark on a scaled-down skin journey. “They’ll come back and say ‘I started adding in all these products and doing all these steps and now I need to reset my skin,’” he explains. To Pacitti, this is evidence that his products work: “They get tempted by other things, whether it’s a new trend or an influencer talking about a new product, and all of a sudden one new product becomes two, which becomes three.”

When it comes to elaborate multi-step routines, Pacitti believes that “inevitably, something’s going to mess up your skin.” When that happens, he welcomes his customers back with open arms. Pacitti compares his brand to that friend who’s always there for you, even when you may deserve the cold shoulder: “Whenever you’re ready to come back, Jordan Samuel Skin is here for you.” As diligent as he is reliable, Pacitti will always try to improve upon the existing 11 products in his line before creating new ones. “A lot of brands launch things that are almost redundant,” he says. “I just go back to the drawing board and reformulate.”