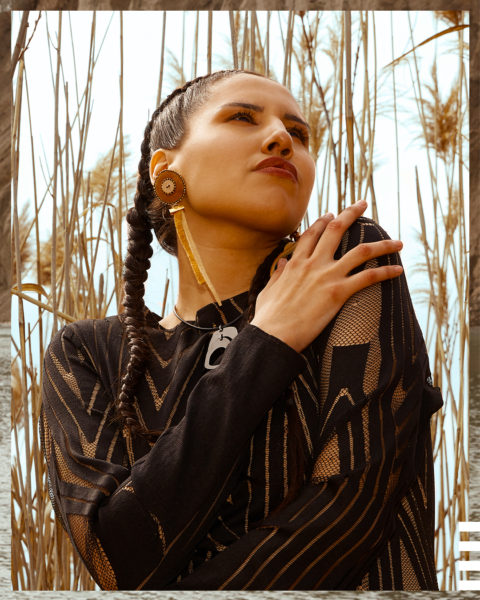 Fancy Face Inc., one of Canada’s leading hair and makeup services brands, specializing in wedding and special events glam, as well as providing an endless array of other services (like masterclasses, maternity photoshoot makeup and more), has officially entered the skincare game. This week, the brand launched Fancy Skin with two new products: the Daydream Rosewater Cream and the Poetry in Potion Serum. Both products are suitable for all skin types and wear beautifully underneath makeup or on their own. “We wanted to ensure we created luxury products at an affordable price point to continue to champion our mission in both simplifying the beauty routine and helping women find their fancy from the inside out,” says Brittany Gray, founder and  CEO of Fancy Face. The launch of Fancy Skin comes two years after the brand launched its signature colour cosmetics line, and we can’t wait to see what this local brand does next.

Sephora Canada has just revealed its campaign in honour of National Indigenous History Month, which aims to “amplify the voices of Indigenous Peoples in Canada, while paying homage to their knowledge, wisdom, diverse strengths, and teachings.” The campaign will be featured on all of Sephora Canada’s digital platforms throughout the month of June, as well as in Sephora stores. Sephora Canada exclusively partnered with Indigenous talent for the production of the We Belong campaign, from the wardrobe and styling teams, to the videographer and campaign photographer. The campaign also features Montreal-based Inuk throat singer and content creator, Shina Novalinga and Winnipeg-based Nehinaw content creator, Michelle Chubb. Sephora Canada also announced that local Indigenous brand Cheekbone Beauty will be launching on Sephora.ca in the next year!

Dove has partnered with Conservation International to launch the Forest Restoration Project, which is designed to, over the next five years, restore 20,000 hectares of forest in North Sumatra in Indonesia, protect the habitats of six endangered species in the region, improve the livelihoods of 16,000 people who call North Sumatra home, and capture an estimated 300,000 tons of carbon dioxide from the air and avoid the release of over 200,000 tons of carbon dioxide equivalent emissions.

Just in time for Father’s Day later this month, Louis Vuitton has released its newest cologne,  Imagination. Developed in Grasse, France by the house’s master perfumer Jacques Cavallier Belletrud, Imagination blends amber, black tea, ginger and cinnamon for a distinct scent. “For five years, I’d been dreaming of revealing the beauty of ambergris [grey amber] and expressing the quintessence of its amber note in a way that’s of-the-moment and devoid of nostalgia,” said the Cavallier-Belletrud in a statement. “The pure, sensual and sophisticated amber then becomes the very essence of the perfume and the expression of a very contemporary masculine elegance.”