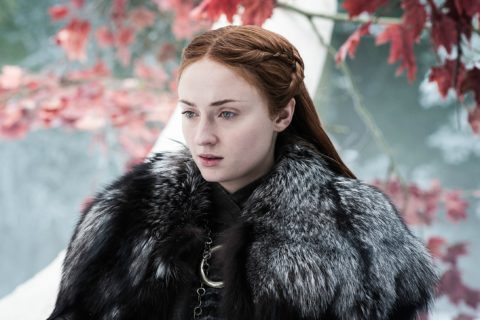 "Season by season, she emulates the people that she's either being manipulated by, influenced by, or learning from."

The internet expands the Game of Thrones universe far beyond the seven kingdoms. Fans of the series have access to Maester-level online resources, which offer spoilers, theories and detailed analysis of the series’ thoughtful symbolism. Where there’s a conversation about GoT, there are 100 headlines to follow—even if the story is about one character’s dirty hair.

For nearly a decade, Sophie Turner has been a subject in these headlines, having been cast as Ned Stark’s eldest daughter, Sansa, when she was just 14-years-old. Over seven seasons, the auburn-haired Lady of Winterfell has been to hell (a hostage in King’s Landing), a place worse than hell (a hostage to Ramsay Bolton) and is now back, living in Winterfell with her surviving siblings. Her hair evolution throughout this hero’s journey—from her Cersei-esque updoes as an aspiring princess in the capital to her a snow-filled Northern braid as a free woman—warrants it’s own iron throne.

In an interview with InStyle, you revealed that you weren’t allowed to wash your hair during the filming of season five of Game of Thrones. How was dirty hair a part of Sansa’s story during at that time? Did the writers or producers give you an official reason?

Well, season five for Sansa was probably her roughest. It was about her escaping Ramsay [Bolton] and going on the run. For the first time in Sansa’s life, she wasn’t properly groomed. For the first time, her hairstyle wasn’t emulating anyone else’s in Westeros; it was just sad and greasy and messy and had snow all in it. It was just disgusting. It was easier for the hair and makeup people if I just didn’t wash it, rather than them putting grease in it.

I bet you never thought so many people would be writing headlines about your dirty hair.

I know, it’s so bizarre what people run with. I was looking at my Twitter mentions that day, and it was all like, “gross, Sophie Turner never washes her hair.” But you do what you’ve got to do for a role.

Eventually, they let you wear wigs. Did you prefer that over having them comb through your greasy hair?

Well, the wig came at a time when Sansa’s hair didn’t have to be greasy. The wig was kind of a saving grace because a few months before I started shooting on that season, I had a really bad hair dye experience. The right products weren’t used and I wasn’t given the right aftercare, and so my hair was very tender and damaged.

We’ve all seen you go back and forth from blonde to red. How are you now nursing your hair through those changes?

It’s all about aftercare for me—and it’s the kind of dye that you use if you are going to dye your hair. Personally, I use Wella’s new Koleston Perfect. Whenever I get it dyed by Koleston Perfect, it actually feels better after I’ve dyed it than before.

Do you notice that when you change your hair from blonde to red, your personality changes with it?

It affects everything. It affects what I wear, how I do my makeup, how I feel, how I interact with people. I’m completely different. With blonde, I feel more confident—or maybe I just feel more like myself; I feel more comfortable.

But I feel cooler with the red hair. My red hair, I feel, is associated with very strong and powerful characters like Sansa, or Jean from X-Men. I always feel very empowered when I have my red hair. It’s so interesting to see how much your hair can affect you as a person.

When you first went blond, did fewer people recognize you on the street? Was the blonde hair almost like a mask that separated you from the characters we associate you with from on-screen?

I think so, yeah. I think a part of me wanted to not be recognized, but I was also trying to move away from the characters that I’m most known for, so people who were casting me in other things can see me differently. I like the idea of being a chameleon and being able to dissolve into my roles without people being like, “Oh, that’s Sansa Stark,” just because I have red hair. It’s nice to be able to switch things up.

The red hair really is so important for Sansa. Do you ever read all the online fan theories about her hair?

I haven’t really. Are they saying something?

People really read into the symbolism of it — though I guess they do that with every aspect of Game of Thrones. But I think Sansa’s hair is almost used as a lens for what’s going on in the rest of the series.

It’s actually true. Season by season, she emulates the people that she’s either being manipulated by, influenced by, or learning from. It’s really interesting.

See? You’re creating fan theories yourself now. There’s another headline I’m sure people will pick up.

Oh, I bet they will.