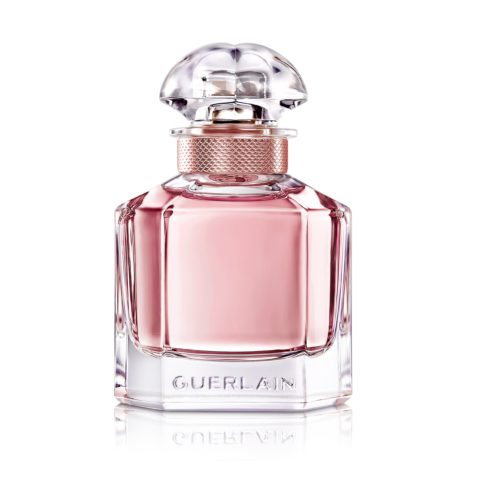 Back in 2015, Guerlain’s president Laurent Boillot took a sample of Mon Guerlain, a fragrance which had yet to be released, to Cambodia to meet Angelina Jolie in the hopes of signing her as the face. “She trashed the bottle,” Guerlain’s in-house perfumer Thierry Wasser recalls—which at the time was a remake of a 1920’s bottle shaped like a bowtie—but she liked the scent. “I was saved,” he says. Yet Jolie didn’t just want to be a face, she wanted to a be a partner. She requested involvement with packaging, communication and of course, the bottle, and as history reveals, she got it. “I think I tap danced for two days,” Wasser recalls of his reaction to Jolie’s official commitment.

Wasser got the chance to meet her and since he’d never met a Hollywood celebrity before, wasn’t sure to expect. He found her to be extremely focused and present. “Very often you meet people and they’re…texting,” he says. “You can feel that they’re not there. She was nothing like that.” Wasser talked to her about her work with the United Nations and the various causes she fights for such as women’s rights and children’s education, and he shared how he helps the emancipation of women in areas where he sources fragrance ingredients such as India, Africa and Latin America. “We had common ground in our conversations and eventually a bond was created.” That’s what led to his next creation, Mon Guerlain Florale.

The flanker, which launched on March 1st, features a higher concentration of jasmine sambac than the original. On Wasser’s sourcing trips to India, he’d see the tiny white flower used in necklaces and offered at temples, festivals and weddings. “The flower has a social skill that’s very interesting to me,” he says. “When I met Madame Jolie, the strength and the feeling that was diffusing out of her led me to make an overdose of this wonderful flower.” Lavender, sandalwood and vanilla still figure in the formula but in different proportions. He compares the experience of both scents to music. “It’s the same sound but with a different orchestration. You recognize the musical theme of Mon Guerlain but the colour and texture is rather different.”