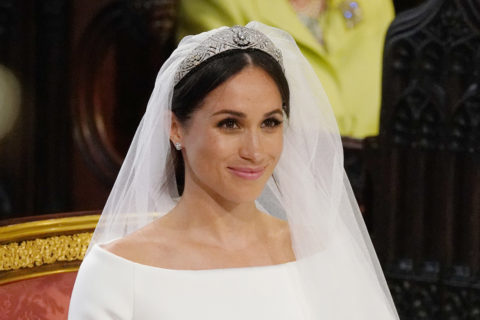 The royal wedding of Meghan Markle and Prince Harry feels like a lifetime ago – particularly now that the pair have relocated to the US after stepping down as senior royals two years after the big day – but one big beauty question has remained since that day which we’d never had a clear answer on: What nail polish colour was Meghan wearing? Many speculated it was Essie’s Ballet Slippers (the colour favoured by The Queen), which seemed like a pretty good guess, but it turns out it was a custom shade.

In a new report by British Vogue, the site revealed that Meghan visited London’s DryBar ahead of her big day for her CND shellac manicure and that the end result was a mix of two shades. The Duchess opted for one coat of Unmasked (a baby pink hue) as the base layer, followed by two coats of Negligee (a very sheer, pale white-pink) on top. For her pedicure, she chose Cashmere Wrap (a soft neutral).

Markle played by the rules for her wedding day mani by opting for a light, neutral colour. On previous occasions, she broke the unofficial palace nail protocol by wearing darker hues on her fingers. But let’s face it, she wears both very well.

Whether you opt to replicate the look during your next at-home manicure, or visit to a salon as the country slowly begins to reopen, we think this is the perfect wear-with-everything hue for summer – and we suspect we’ll be seeing it everywhere now that the news is finally out.

Photo by Jonathan Brady - WPA Pool/Getty Images
Get the best of FASHION in your inbox Thanks for signing up!
The latest fashion, beauty and celeb news delivered right to your email #FASHIONforall Now, check your inbox to complete your subscription
We won’t ever use your email address for anything else
Want even more FASHION? Follow us on social media.