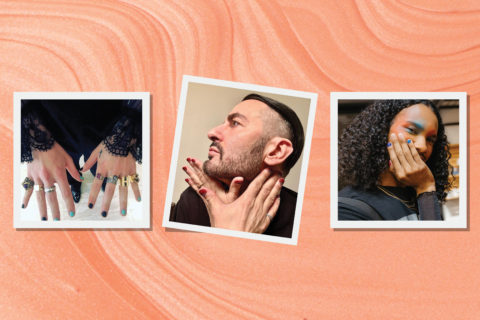 Could Nail Art Be the Next Frontier of Gender-Neutral Beauty?

For centuries, men have polished their nails to symbolize everything from social standing to rebellious indifference. Fast-forward to now and style-savvy dudes are embracing intricate manicures.

Since splitting from One Direction and emerging as a solo artist in 2017, Harry Styles has become somewhat of a poster child for eccentric men’s fashion in the world of mainstream pop music. (Think paisley prints, floral suits, sheer women’s blouses and costume jewellery.) The 26-year-old has also been using beauty—nail art in particular—to play with the notion of genderless style. While Styles may not be a nail art pioneer (after all, men have been wearing nail polish for ages), his penchant for two-toned, playful nail art has not gone unnoticed. These days, he joins the growing list of male celebrities, including the likes of Pete Davidson, Bad Bunny, Ansel Elgort, Jaden Smith and A$AP Rocky, who are using nail polish to amplify their personal style.

What do the aforementioned celebrities have in common? Other than the fact that they’re all entertainers, not a whole lot. They exist within different genres of music and even entirely different avenues of entertainment—and that’s the point. While nail polish has adorned the fingertips of famous artist types in the past (like Kurt Cobain, Iggy Pop, Marc Bolan and David Bowie), it used to be a symbol of a certain counterculture—be it grunge, punk or glam rock. Black nail polish in particular, and the subcultures in which it resided, symbolized a deviation from the norm.

But these days, with genderless fashion and beauty becoming the norm and a “no rules” approach to style cementing itself as the only—and perhaps final— style rule, do countercultures exist anymore? “The acceptance and freedom in men’s fashion has opened up a sense of creativity in styling, including the use of beauty as an accessory,” says Jan Arnold, co-founder and style director of CND, who suggests that nail art is the obvious next step in the world of gender-neutral style, following in the footsteps of unisex fashion and genderless skincare, hair care and makeup.

Ironically, although polished nails—from intricate designs to simple one- shade manicures—have long been seen as feminine, nail polish has actually been around since 3200 BCE, and back then, it was used by men. Babylonian warriors would paint their nails with kohl to intimidate their enemies. In ancient China, nail colour was used to symbolize social standing and class; bold shades, such as black and red, were reserved for royalty. But as we’ve seen with other facets of the fashion and beauty industries in the past, gender associations can, and often do, change over time. Pink wasn’t viewed as a feminine shade until the 1950s. Today, gender associations are becoming altogether obsolete.

Unsurprisingly, the fashion industry has welcomed the genderless nail art movement with open arms. From the kitschy manicures at Balenciaga’s Fall 2017 menswear show (created by fashion industry favourite Mei Kawajiri) to Marc Jacobs’s eye-catching nail art in the Givenchy Spring 2020 campaign, men wearing nail polish is gradually becoming more and more common in photo shoots and on runways. Rita Remark, global lead educator for Essie, has noticed the trend gaining traction backstage at fashion week, where she has painted identical nail art manicures on male and female models walking the runway for brands like WRKDEPT and Monse. “Nails walk the line between fashion and beauty, so genderless nail art has always just made sense to me,” she says.

While some celebrities, like Styles, Elgort and Davidson, turn to nail polish to complete a look and express a previously untapped facet of their personal style, A$AP Rocky has used nail art to make statements unrelated to fashion. Following his release from prison in Sweden last year, the rapper was seen with the words “F*ck Off” painted on his nails (the nails on his middle fingers, to be precise).

Amsterdam-based nail artist Jessica Scholten, who works with A$AP Rocky, predicts that while the men who wear nail art now are still largely celebrities and artists, it will soon reach the masses—and has already started to—noting that the number of men who visit her salons (she is the owner of Amsterdam’s nail art concept salons, Lawerk) is climbing. “Nail art today is a form of personal expression,” says Scholten, “instead of the rebellious act it used to be.”

A timeline of men wearing nail polish throughout history.

3200 BCE
According to an exhibit presented by CND called Tiny Canvases: The Art of Nails, the first known instance of nail polish was in ancient Babylon. As an intimidation tactic, Babylonian soldiers would paint their nails with kohl before going into battle.

600 BCE
In ancient China, certain nail colours, such as black, gold and red, were reserved for royalty—regardless of gender. Non-royals were only permitted to use pale shades, like soft pink, which was achieved with the use of rose petals, explains Gabriela Hernandez, a makeup historian and the founder of Bésame Cosmetics. Wearing the wrong colour was punishable by death.

500 BCE
Greek soldiers applied red colouring to their nails (and lips!) to prepare for battle.

1400s
In preparation for battle, members of the Inca tribe of Peru used natural dyes to decorate their nails with drawings of eagles, symbolizing power and strength.

1800s
Well-groomed nails with a sheen to them became popular because they gave the appearance of good health, says Hernandez, so men would regularly get their nails buffed at the barbershop. “Ads for nail pomades would feature men, not women.”

1970s
The first-ever nail polish to be sold in stores (a red lacquer called “Cherries in the Snow” by Revlon) had been around for four decades, but the beauty product was marketed solely to women. In the 1970s, rockstars like David Bowie and Freddie Mercury took to wearing colour on their nails.

2010s
Celebrities like Johnny Depp and Seal have adopted nail polish as part of their signature looks, wearing bold shades of blue and green. In 2019, nail polish brand OPI released an ad called “Will you mani up?” that showcases men wearing lacquer and getting manicures.