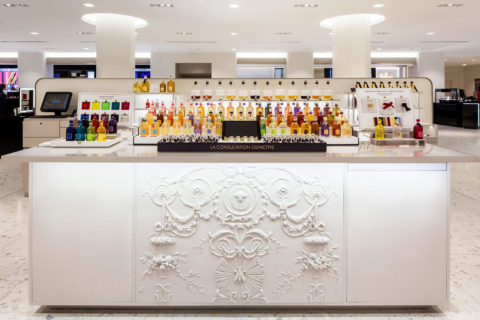 As a long-time Shalimar devotee, Guerlain’s first Parfumeur Boutique in Montreal was a destination I was eager to check out. Located inside the newly minted Holt Renfrew Ogilvy beauty hall, it’s the third of its kind in North America—the only other two on are in New York City, at Saks and Bloomingdale’s respectively—and features a digital consultation service plus 25 fountains that spout a variety of the brand’s signature perfumes, some over a century strong and often difficult to track down on this side of the pond. “The beauty of the fountain is that you can refill [bottles] with classic fragrances that some people were researching for so long and only able to find in Paris,” says Marieline Patry, Guerlain’s vice president of education and retail development. “We bring Paris to you.”

Having worked for Guerlain for close to 16 years, Patry’s deep knowledge of the brand runs deep, and is evident when we start to talk about Shalimar, which is nearing a century since its conception and remains one of the house’s most popular fragrances. “There was this king [in India] whose wife passed at the birth of their child and he was heartbroken, so he created the Jardin Shalimar…Guerlain fell in love with the story and created Shalimar Parfum.” It’s just one of the storied scents available for refill, alongside Eau de Cologne Imperiale (1853), L’Heure Bleu (1912), Mitsouko (1919) and more. “The beauty of Guerlain is that you have a love story behind every fragrance,” says Patry.

If you don’t have a current favourite Guerlain scent, the counter’s digital consultation service can guide you to one. It begins with a blind test, where a consultant takes you through a series of basic notes to see what you like and what repels you entirely. On the touch screen, you then classify each different note under the category of smells you love, like, are indifferent to or can’t stand. The result is a selection of perfume recommendations—I got Néroli Outrenoir, Insolence and Rose Barbare—tailored to the notes you responded positively to.

Patry emphasizes the importance of actually testing fragrance on your skin, instead of just giving it a whiff on a strip of paper, to take into account how your unique body chemistry reacts to certain fragrance components. “You are the last note when it comes to a fragrance,” she explains. “Your chemistry at one point kicks in and you perfume the perfume.” She also advocates sidestepping gender divisions in fragrance—though that is the first question customers are asked in their digital consultation, with a choice between women’s, men’s or both genders. “I don’t truly believe in a gender when it comes to fragrance, and I also don’t believe in a season,” she says. “But I think everybody when they come to visit the House of Guerlain can find their signature.”

Once you’ve zeroed in on a scent you could see yourself wearing on a daily basis, the final step is choosing your Guerlain bee bottle (designed in 1853 by Pierre-François-Pascal Guerlain for Napoléon III’s wife, Empress Eugénie). They’re available in a range of colours—black, purple, grey, yellow, red and more—and can be customized according to your taste, with a ribbon and engraving of your choice. The entire consultation process, which is free of charge, takes less than half an hour to complete, and is especially worthwhile if you haven’t yet come across your go-to fragrance. Even if you don’t jive with any particular Guerlain perfume, you might find that you like florals or citrus notes more than you thought you did. Best case scenario, you’ll leave with a new signature scent.

Photography courtesy of Guerlain
Get the best of FASHION in your inbox Thanks for signing up!
The latest fashion, beauty and celeb news delivered right to your email #FASHIONforall Now, check your inbox to complete your subscription
We won’t ever use your email address for anything else
Want even more FASHION? Follow us on social media.