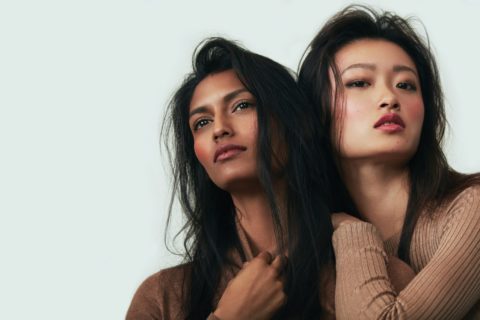 Canadian media personality, Monika Deol, is no stranger to the beauty world. The former Electric Circus host wore an array of makeup looks while fronting the live dance show on Friday nights in the late ’80s and early ’90s.

But like many women with medium skin tones, Indian-born, Canadian-raised Deol struggled with finding exact matches for her face.

“I always had to mix my foundations, and I always had concealer that didn’t quite look right on me, and I’d have to correct it with a powder,” says Deol.

While brands such as Iman Cosmetics, Vasanti and M.A.C have addressed the need for darker skin tones, Deol still felt that a wider range for medium skin tones was lacking. So, after embarking in her own research which involved charting every single colour of every foundation Sephora sells using a Pantone skin tone chart, Deol decided to take matters into her own hands and launch her own cosmetics line, STELLAR*.

The Canadian-made brand is described by Monika as “high performance and accessible makeup” that’s all-inclusive, but “pays serious attention to the skin tones in the middle.” Of the 22 foundation shades available, 17 of those cater to medium skin tones, that is, women of Hispanic, Latino, Afro-American, Aboriginal, Chinese, Filipino, Middle-Eastern and Indian descent. The rest of the range consists of four loose powders, six concealers, 19 lipsticks (five of which have a metallic finish), three blushes and one mascara.

“I wanted to start with a core group of useable, versatile, universal products that make anyone look polished,” says Deol of the collection. “I think the weird thing about my life is I’ve lived a lot of lives. I’m that mom that drives my kids to school and make their breakfast and make their lunch…and then I would literally be standing in a soccer field in the rain in Vancouver…and then I would run home, change my clothes, fix my concealer and then go to a gala.

But the concept behind it is all about empowering women, specifically those who have been excluded by beauty brands in the past.

“We [medium skin-toned women] are now a force to be reckoned with, economically and culturally,” says Monika. “When I was young, I was the only Indian girl who wore makeup. Nice Indian girls did not wear makeup. But now…they wear it in a polished, sophisticated way.

“We’ve grown, all of us in the middle, as a culture. Women get that [makeup] is not tripe, not superficial…it’s empowering to say I’m going to wear this bright lip and it’s going to reflect the mood I’m in.”

STELLAR* is currently available at sephora.ca and ranges from $26-$45. It will launch at select Canadian Sephora locations on March 13, 2017.