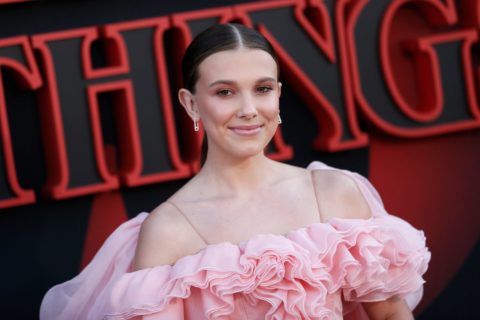 Launching a beauty line is officially the thing to do if you’re a celebrity these days. This past week alone we’ve had announcements from Selena Gomez and Ciara and now, Stranger Things lead Millie Bobby Brown is getting in on the action.

Having worked on sets since she was 10, Brown explained that she’s picked up a bunch of tips and tricks along the way and realised that there was a gap in the market for Gen Z consumers. “I guess I could never find anything that I liked to put on my face and it felt good. There are multiple different products I’ve put on that weren’t good for me. Some of those were anti-ageing, and I was 10 years old,” she explained. Her favourite products from the range, she says, are the Light Skin Tint and Eye Gel pads. Prices will be between $10-$45 and the brand will be available in Boots in the UK, Ulta Beauty in the US and direct to consumers online via its own dedicated e-commerce channel.

The two things we love most about the line? One: a percentage of the proceeds from the sales will be donated to the Olivia Hope Foundation which was founded in honour of Brown’s late friend, Olivia Hope LoRusso. And two: the entire range is PETA-certified, vegan and cruelty-free. *Insert clapping emoji*

Florence by Mills is being launched under Beach House, the same company responsible for Kendall Jenner’s Moon and Shay Mitchell’s Béis, reports Fashionista.

Photo by ETIENNE LAURENT/EPA-EFE/Shutterstock
Get the best of FASHION in your inbox Thanks for signing up!
The latest fashion, beauty and celeb news delivered right to your email #FASHIONforall Now, check your inbox to complete your subscription
We won’t ever use your email address for anything else
Want even more FASHION? Follow us on social media.