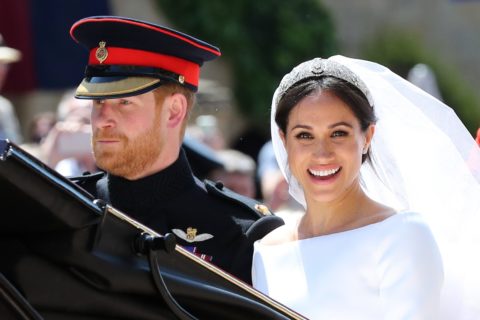 No longer a “commoner” as the English commentators were calling her today (ugh, so rude), Meghan Markle is now officially a royal with the title Duchess of Sussex and crossed over to that world this morning wearing a swept up chignon. The man responsible is French-born, New York based-hairstylist Serge Normant, known for being the consistent mane man for Julia Roberts and Sarah Jessica Parker. The style was centre parted, there was a looseness above her ears and it was topped off with Queen Mary’s diamond bandeau tiara, on loan from the Queen (does this count as her something borrowed?), which was made in 1932.

Markle’s longtime makeup artist Daniel Martin, whom she first met in 2011 at a television industry gathering when she starred on Suits had the honours of doing her face. Martin, who works with both Dior and Honest Beauty in the US where he is based, kept her freckles showing through, and paired it with slightly smoky eyes, defined brows, false lashes and an understated pale pink lip. She looked like herself, and it was every bit as modern as the touches she brought to the ceremony.

(Photo by Gareth Fuller - WPA/Getty Images)
Get the best of FASHION in your inbox Thanks for signing up!
The latest fashion, beauty and celeb news delivered right to your email #FASHIONforall Now, check your inbox to complete your subscription
We won’t ever use your email address for anything else
Want even more FASHION? Follow us on social media.