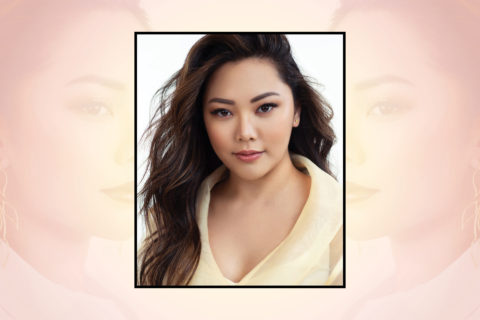 Welcome to My Story, our series dedicated to creatives of colour and their paths to success. By championing these diverse stories and backgrounds, we hope that our understanding of the cultural conversations around beauty and fashion will expand and that respect for our differences will flourish.

Meet Yu-Chen Shih, the Taiwan-born, Singapore-bred, L.A.-based founder of Orcé Cosmetics, a niche six-shade range of foundations made specially for Asian complexions. The luxe, skin-enhancing formula, which launched in 2019, also addresses common skin concerns of Asian skin. Yu-Chen, who formerly worked in diversity marketing, has been a longtime makeup lover and created Orcé in just under two years after being fed up with failing to find a foundation on the market that not only properly matched her skin tone, but worked with—not against—her skin. Here, she shares, in her own words, the mission behind her makeup brand and how skin-tone biases have long vexed Asian communities.

On what motivated her to start a beauty brand:

“The reason I decided to create foundation was because that was the biggest issue I’ve had. I’ve been a lifelong makeup lover — I started doing makeovers at the age of 11 — and foundation was just one of those things that I wanted to love but I just couldn’t find any options for myself. Eventually, I just felt like maybe foundation wasn’t for me because, first of all, the formulas almost always broke me out. And then in comes the skin tones. A lot of foundation lines on the market, no matter how wide their shade range, the undertones always seemed a little bit off from my own skin. I found myself having to often settle for a shade that I knew was not right for me. It was often too pink or too orange, and I’d have to mix two to three shades every day to find the perfect colour. So, I wanted to create foundation for Asian women who have traditionally been overlooked in terms of shade ranges. Foundation is one of the hardest cosmetics to make, but it’s the most important: It’s the basis of every look.”

On landing on her brand name, Orcé Cosmetics:

“Orcé is a made-up word derived from the word force. The reason I chose this name was because when I worked in diversity marketing, I always had an issue with the way a lot of brands portrayed Asian women as softly-spoken and fragile. Some even go to the extent of portraying Asian women as being submissive and hiding behind a veil. I used to do advertising strategy for a global Asian beauty giant, and their signature ad is a model hiding behind a translucent veil. And, of course, Hollywood does not help. I think the way that brands portray Asian women is not only untrue, but also limiting. A lot of the fiercest and most capable women that I know are Asian. And so, with Orcé, I want to start creating change by portraying Asian women as a force to be reckoned with.”

On the product development process and confronting colourism along the way:

“When I started, I had no idea what it entailed to create not only the formula, but also the shades. I thought it would be easy: I first went to Japan and to Korea and I collected some of the top-selling foundation lines and brought them back to the States. I then started testing them one-by-one on myself and women around me. But these brands from Japan and Korea, which are purportedly made for Asian women, don’t actually really match our natural complexions. I noticed, and I’m generalizing here, that a lot of the Korean foundations tend to have a pinkish, even ashy finish, and that Japanese brands tend to oxidize a lot and they kind of have a pinkish, reddish finish. I learned later from some Japanese friends that these brands are really big on complexion correction because Asian women want to look porcelain — they want to eradicate the yellow undertones in their skin. Skin tone is a very sensitive topic for the Asian community, and like colourism here in the West, colourism exists in Asia also. We’ve been taught that only fair is beautiful. I’m someone who, in the Asian world, is considered darker, so my natural skin colour wouldn’t be covered by a lot of these Korean and Japanese beauty brands. My team ended up having to scrap all of the foundations we brought back from Japan and Korea and we started creating shades from scratch, which we were able to narrow down to six that are spread between light and deep. Each shade was tested for rounds and rounds on real women.”

What do you want to know about our shade range? Drop your questions below and we’ll guide you to your perfect fit. ?

On personally facing colourism growing up and its deep-seated connection to her brand’s DNA:

“I developed a complex when I was younger. When I was still living in Asia, I was extremely self-conscious about my skin tone because I was darker. My father’s from Malaysia — from an aboriginal tribe called the Melanau — and he’s also part Middle Eastern, so I looked very different from my friends and many relatives. I was made fun of a lot and called names. People would kind of insinuate that I was uncivilized, poor and barbaric because I was dark. That generally is the sentiment towards darker-skinned people in Asia. Perhaps not as much today, but there’s still some of that, especially within older generations. My mother put me through skin-whitening treatments since I was 10-years-old and, by the time I was 14, she started more aggressive treatments like hooking me up on IVs that contained skin-whitening ingredients such as glutathione. When I moved to the States for college, I started to let go of all of that. The extent of skin-whitening in our culture is just so unhealthy, so with my foundation line, I made sure to create shades that matched our natural complexions. I want to encourage women to embrace the skin that they’re in. You don’t have to correct your skin tone. You’re beautiful the way you are.”

On what she’s learned about the cosmetic industry at large when it comes to foundation:

“Overall, there’s a lack of thought and a lack of research in terms of skin tones. The cosmetics industry, let’s be honest, is traditionally geared toward Caucasian women. It’s only a recent trend to start including minorities. When I was developing my shade range, the manufacturer I started working with gave me a Pantone skin colour book and said, ‘Go ahead and pick however many shades you want from this book and we’ll make it for you.’ I just sat there dumbfounded — my customers are not pages of a book; they’re real people — and the manufacture told me that a lot of brands do that. I think that a lot of brands on the market are just copying each other, or there’s not a lot of research done on real women.”

On the models she chose for her brand’s marketing campaign:

“Initially, we got a bit of backlash from the Asian community, especially from those in Asia, for the models we chose for the website. Traditionally, [the Asian community] has a very strict and narrow standard of beauty. Like, if you go to Korea, almost all of the models and spokeswomen look the same. There’s only one face that represents beauty: fair skin, large eyes, a tall nose and a tiny face. With the models that I selected for the brand, I wanted to challenge that. I feel that women come in all shapes, sizes and forms, and we need to celebrate beauty that’s different. So, I mostly chose models that are not traditionally considered as beautiful in the conventional manner. But in my eyes, they’re stunning! That’s the first thing I wanted to convey with my brand: That no matter your facial features or your skin tone, you’re beautiful.”

“We have three ingredients that I like to call our star trio. The first one is Tahitian pearl extract, which has a very long history in traditional Chinese medicine; pearls have been used for beauty and health purposes for centuries, dating all the way back to Empress Wu. Empress Wu is a legendary character in history, and she was widely known for consuming pearls as a supplement and using it in her skincare. Pearl is an adaptogen that balances out inflammation in your body if you consume it. Topically as an extract or in the form of powder, it helps to speed up wound healing and helps encourage collagen production. It also helps with hyperpigmentation, which is one of the most common struggles faced by Asian skin.

Second (and my personal favorite) is hyaluronic acid. Asian skin has a really thin stratum corneum (the top most outer layer of the skin which acts as our protective barrier). When it’s thin, not only are we more vulnerable to harsh ingredients and environmental stressors, we’re also more prone to transepidermal water loss, which is when moisture just escapes through your skin. So, throughout the day, the skin is just getting more and more dehydrated. At the same time, Asian skin has really active sebum production; we tend to be oilier than other ethnicities. This is a recipe for acne: dehydration and oil. So, I wanted to hydrate the skin without using oils, and hyaluronic acid is the perfect ingredient to do that.

Last but not least, is a Chinese herb called Evodia fruit. In Mandarin, we call it wu zhu yu. It’s a strong anti-inflammatory ingredient and when I was formulating this product, the chemist I was working with showed me that when used topically, it actually helps to improve skin texture, boost radiance and protect skin from environmental stressors.”

The only way we're wearing foundation these days if it's skincare too. Come Closer's formula works to correct imperfections, not just cover them. ✨

On the non-negotiables of her foundation formula:

“Number one: It had to be oil-free. I consulted with dermatologists and the general consensus is that if you have really oily skin and you’re breaking out, you shouldn’t be adding any additional oils onto your skin. There are other ways to moisturize your skin without using oils specifically. Number two: It had to be non-comedogenic. I’m surprised that a lot of foundations on the market are still clogging pores. Lastly, fragrance-free because fragrances are the number one cause of any negative reactions or allergic reactions in sensitive skin.”

Images courtesy of Yu-Chen Shih. Design by Kayleen Dicuangco.
Get the best of FASHION in your inbox Thanks for signing up!
The latest fashion, beauty and celeb news delivered right to your email #FASHIONforall Now, check your inbox to complete your subscription
We won’t ever use your email address for anything else
Want even more FASHION? Follow us on social media.