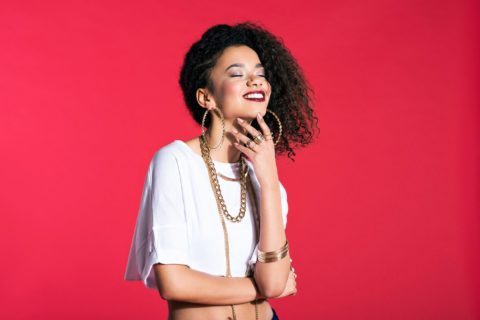 On Makeup as a Power Tool, an Act of Rebellion and a Source of Control

I wasn’t allowed to wear makeup before high school. So when I finally got there, I had some making up to do—literally. My look of choice was black eyeliner. I was too much of a novice to really experiment with anything like blush or eyeshadow or lipstick. Black eyeliner was easy, it looked better smudged around my waterlines and it pissed off my mom. It was perfect. But it was also my armour those first couple years of high school. It made me feel tougher, more confident, less likely to be messed with. Even today, when my makeup is more natural, black liner smudged around my eyes and in my waterlines makes me feel un-fuck-with-able.

I’m not alone. Most women have a look they turn to when they need an extra vote of confidence or want to feel in control. Some wear it every day. Some, like myself, pull it out for special occasions. But anyone who has rummaged through their mother’s, their aunt’s or their friend’s makeup stash, knows about the transformative power of makeup.

“For me it’s all [about] mascara,” says writer Kate Carraway. “When I put on mascara, I feel right in a way that I’ve never felt in, or about, any other individual product. It makes me feel confident because it exaggerates my best features, and powerful because it makes me feel like I have my whole look handled.”

The “myself-but-better” look is one that’s been reigning supreme with makeup in recent years. So much so that many of my (mostly male) friends don’t realize how much makeup I wear (concealer, mascara, blush, highlighter, cream shadow, translucent powder) to look like I’m not wearing anything at all. Sometimes the transformative power of makeup has less to do with a physical transformation (although there is a real change from fresh-out-of-bed me to fresh-faced-but made-up me) and more with how you wish to be seen by the world. It’s a different kind of armour than the black liner of my youth, less in your face, but it’s armour nonetheless.

“People have been arming themselves with makeup for a very long time,” says writer Anne T. Donahue. “Elizabeth the First was so obsessed with having a white face she gave herself lead poisoning—just because she felt powerful that way.” There’s something to be said for tricking yourself into confidence with makeup. “I find that the bigger risks I’ve taken with makeup, like green or blue lipstick, [the more] able [I’ve been] to take more risks,” says Donahue. “Or at least be seen as someone who takes more risks in [real] life.”

The feeling of control that comes from mastering your makeup is not to be underestimated. “I really get a kick out of seeing the reaction from people I do makeup for and you can see they instantly feel better about themselves.” says Maybelline makeup artist Grace Lee. “Whether it’s a celebrity, model or client, when they look in the mirror and like what they see, they definitely perform better in their tasks because they know they look good.”

And that’s the other thing about makeup—while there are expensive brands and exclusive collections, once a product is on your face, the branding disappears. A two dollar lipstick is no longer defined by its price—it either makes you feel great or it doesn’t, and you’ll remember that the next time you head to your local drugstore, Sephora, or your sister’s dresser. “Makeup is for everybody,” says Donahue. “Think about how transgender people can experiment with their aesthetics privately before they do it publicly. There’s real value to something that is so small and can fit in your pocket, but can change the world for you.”

Makeup can be used to fit in (there’s a reason certain decades are defined by a single look), to stand out (“there’s power in a ‘fuck you, look at me’ look,” says Donahue), to rebel, to provoke, to mask, to slight (“If I know I’m going somewhere to meet an enemy,” says Donahue, “I want to look so done-up that it’s almost terrifying”), to feel more like ourselves, or less. It’s a confidence boost and gives us the illusion of control. And though our reasons for wearing it change from day to day, what doesn’t change is the fact that we continue to wear it and to experiment. Constantly refining and redefining our looks and returning to our go-tos. “[Makeup] is almost like when you’re a little kid and you have your blanket as a cape,” says Donahue. “It’s an extension of you, that creates the myth around you.”

So why will Carraway never give up her mascara and Donahue her lipstick? “Women want the best of something—best for them, that is, depending on what their requirements are,” says Carraway. “And when they’ve found that, there’s no going back.”