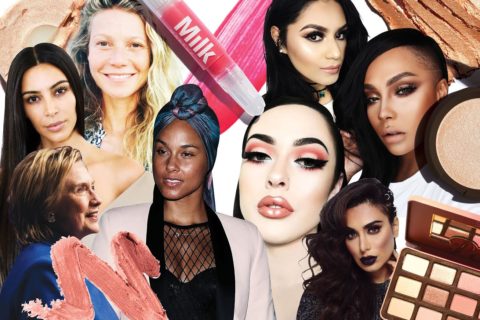 Barely There or Brazenly Contoured: Why Makeup is as Polarizing as Politics Right Now

Years ago I worked at a television station, and the weirdest part of my job was seeing older male newscasters wandering the halls in full TV pancake makeup as they waited to go on the air. Foundation clung to their usually invisible facial hair, making them look like they were covered in faint yellow fur.

I’d forgotten about them until recently, when I sat across from a trio of Instagram stars at a beauty-industry breakfast. On their feeds they seem gently sculpted and defined, but in the morning light, these girls, who weren’t even 25, looked much older with their contoured beige faces, blackened brows and matte-brown mouths. In their social-media-powered world, #selfie-ready is not just a hashtag; it’s a requirement.

The yin to this yang-like love for “all beauty products all the time” are the #nomakeup crusaders or makeup minimalists who say they apply a swipe of mascara and they’re good to go. Regardless of which camp you’re in, membership comes with certain expectations, biases—and tensions.

To an outsider, a heavy-handed fondness for foundation (and contouring and highlighting) might seem like self-erasure. But to those inside the circle, it signifies belonging and strength. “Makeup is returning to a tribal function,” says Poppy King, founder of the Lipstick Queen brand of lipsticks. “The ones doing full-on makeup are trying to transcend themselves, and the no-makeup ones are saying ‘I don’t need artifice; what I have is inside.’”

Stephanie Wissink, a managing director and senior research analyst at U.S. investment bank Piper Jaffray, visits Sephora the way Margaret Mead studied Samoa. Based on her field research in the beauty industry, she concludes that “the face has become the palette of personalization and identification.” In fact, says Wissink in an article in Investor’s Business Daily, the beauty industry’s recent growth “almost exactly” parallels the explosion in smartphones.

Brands have also noticed this connection, which is why we’ve seen them releasing mainstream yet social-media-friendly versions of products formerly found in theatrical-makeup stores. Estée Lauder’s The Estée Edit skews to a younger audience eager for phone-camera trickery with blue-tinted brightening products like Flash Photo Powder and Flash Photo Gloss, while drugstore staple Physicians Formula’s #InstaReady line promises flawless skin to a “selfie-centric” audience. And is there any brand left that doesn’t offer contouring and highlighting options?

Ironically, the selfie-obsessed beauty subset that normalized false lashes for daytime actually trumpets inclusiveness instead of “You can’t sit with us” elitism. It prides itself on being a true community, harbouring outcasts and weirdos, because, unlike fashion, makeup doesn’t exclude anyone based on size or gender.

Age, however, might be a barrier as Instagram makeup is considered a young person’s game. Few over-35 faces can take that much foundation and the truckloads of translucent powder needed to “bake” (set) a look. Makeup artist Maribeth Madron ascribes one’s earliest desires for heavy makeup to nothing more sinister than youth. “When you’re young, your hormones tell you ‘I’m fat; I want to look sculpted and sexy.’” Once you get on that road, it’s hard to see when it’s time to get off. But suddenly “you’re 35 and the fat pads start to shrink, and you want roundness.”

Although there may be an ageist bias in the YouTube beauty world, weight and gender neutrality is openly embraced, provided the fans think who they’re watching is authentic. Nikkie De Jager of NikkieTutorials (6,187,623 YouTube subscribers) is open about her weight struggles. Jeffree Star (3,375,005 YouTube subscribers), with his pink hair and tattoos, is like a goth beauty unicorn. Even CoverGirl has signed James Charles, a smiley 17-year-old Instagrammer with perfect brows, to front its new So Lashy! Mascara under the banner of “beauty equality.” It was only six short years ago that J.Crew president and creative director Jenna Lyons painted her son’s toenails pink, setting talk radio ablaze with transphobia. It all seems archaic now: Men who wear makeup are no longer outliers, and the idea of gender fluidity is gaining acceptance. Or maybe it’s the normalization of makeup for all men. (Heaven knows we would never begrudge anyone the wonders of concealer and blush.)

But while inclusiveness—with the possible exception of age—exists inside the makeup biosphere, venturing outside its contoured, highlighted and glittery gates can expose a person to scrutiny and ridicule. Hillary Clinton’s first appearance after last year’s election loss inadvertently became a handy litmus test. To some, her bare face symbolized that she was officially done with the patriarchy and its strictures, yet to her detractors it confirmed that she was old, unattractive and, well, finished.

Similarly, Alicia Keys’ rejection of cosmetics, which she announced in Lena Dunham’s newsletter Lenny, was widely viewed as a diss to women’s beauty choices. The singer said that wearing makeup had become one of the metaphorical masks she wanted to shed. Her goal was to be “raw and real,” but to makeup enthusiasts it sounded like a criticism of their decision. In response, Keys went on Twitter to assure the haters: “Y’all, me choosing to be makeup free doesn’t mean I’m anti-makeup. Do you!”

Columnist and avowed makeup fan Sali Hughes was asked to write about the tempest that Keys’s makeup-free stance had launched. “They think I’ll be really defensive, but I think that if Alicia Keys doesn’t want to wear makeup, then she shouldn’t wear makeup,” says Hughes, who recently published Pretty Iconic, a Proustian tour through beauty products and memory. “And I think that’s marvellous, and it should be celebrated. I hate the idea of people feeling obliged to wear it.”

The disproportionate attention given to a woman’s decision to choose (or not choose) makeup led Nigerian-born novelist and feminist Chimamanda Ngozi Adichie to exert some pre-emptive self-censorship. She told The New York Times she used to avoid wearing makeup when she was in the United States because she worried that she wouldn’t be considered intellectual. “I very quickly realized that if you want to seem as a serious writer, you can’t possibly look like a person who looks in the mirror,” she said.

The author of the viral TED Talk “We Should All Be Feminists” is now the face of British makeup brand Boots No7. “At some point, I wanted to be who I am,” she recalled. “And who I am is a person who enjoys, from time to time, putting a bright colour on my lips.” In the same interview, she said she respected Keys’s decision not to wear makeup. “If makeup feels that way for you, then don’t do it. We have to allow women a multiplicity.”

Some beauty companies are even built on the idea that colour cosmetics should be an easy-to-use pleasure, not something requiring both a new skill set and a brush-and-sponge arsenal worthy of a professional makeup artist. Glossier, an offshoot of Emily Weiss’s cult beauty blog Into the Gloss, even manages an elegant bit of shade-throwing with its “No liner, no blotting, no YouTube tutorial necessary” line in the description of its Generation G matte lipstick.

Glossier launched with a teaser Instagram account that was filled with pictures of fresh-faced model types and beauty koans like “Skin first. Makeup second. Smile always.” Its tightly curated product edit is as far from YouTube makeup as a Tulum beach hut is from a high-rise Marriott. Its Boy Brow Grooming Pomade creates brows that are the complete opposite of the hyper-defined ones seen on Instagram, and the ultra-sheer Skin Tint bears only a notional relationship to actual foundation. Upon purchase, the products come in the brand’s signature pink bubble-wrap envelope that serves as a “bat signal” to other too-cool-to-care Glossier fans. (Note: The company still doesn’t ship to Canada.)

Similarly, Milk Makeup, founded by the people behind Milk photography studios in NYC and L.A., is for “girls on the go” who aren’t interested in time-consuming sessions in front of the mirror. The brand’s mantra is “high-concept/low-maintenance” products that offer on-the-fly solutions, from sheer washes to bold hits of colour. The Blush Oil, a liquid cheek colour, is dispensed via a roller ball, and the Eye Vinyl, a glossy shadow, is loaded in a click pen.

Although relations between the #makeup4ever and the #nomakeup tribes are mostly cordial, the fact that both still have to justify their POV demonstrates a surprisingly restrictive view of beauty. It also highlights society’s pernicious habit of judging the choices we make as women. As Clinton supporter Dunham observed in a shell-shocked post-election haze at last November’s Glamour Women of the Year symposium, “Women have to deal with being objects of desire and objects of disdain.” It’s time to put that ill-fitting old paradigm to rest once and for all.