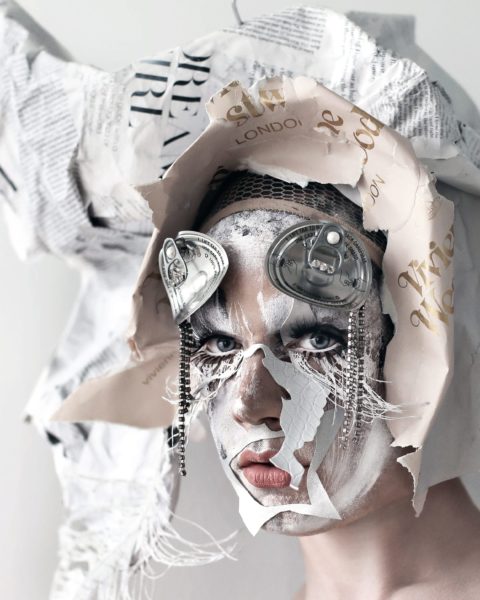 “I find things that don’t have perceived value as they’re on their way to some landfill and allow them an extra leg in their journey.”

Even if you’re not one of the 95,000 people who follow Lyle Reimer (a.k.a. @lylexox) on Instagram, you’ve almost certainly seen his work on your Explore page. The makeup artist turned mixed-media artist is unlike anyone else on Instagram—especially other makeup artists. There are no cut creases or intense streaks of highlighter to be found on Reimer’s account. Instead, there’s lots and lots of garbage.

“Everything you see is created using trash,” says Reimer, whose followers send him boxes of garbage from all over the world that include everything from empty deodorant sticks to contact lens cases. He then glues or attaches the materials to his face to create over-the-top looks that are sometimes uncomfortable to look at and sometimes stunningly beautiful. “I find things that don’t have perceived value as they’re on their way to some landfill and allow them an extra leg in their journey,” he says. Once Reimer’s got his shot for Instagram, the objects don’t just get discarded. “I save everything in my studio,” he says, where he has drawers and shelves organized by category, such as wigs, headpieces, earrings and facial adornments. “When I do gallery and museum shows down the road, I want to still have all the pieces.”

Reimer, who was a M.A.C Cosmetics trainer in Vancouver for 16 years, started his account in 2013. While he didn’t start it with sustainability in mind—he was simply looking for another creative outlet—eco-consciousness has been a part of his life since he was young. “My mom was big into recycling long before it was fashionable to be conscious of the environment,” he says. “Even though I wasn’t initially calling my work ‘sustainable,’ it is.” Because he grew up caring about the environment, he’s attracted to that type of art and is incredibly strict about working with used materials. “One hundred per cent of the things I use are recycled,” he says. “It’s important to me that they haven’t been purchased from a craft store or something.” His goal is to open people’s eyes to the fact that “we label things as garbage too readily.” Reimer hopes his art makes a statement about slowing down and being observant and more open to inspiration.

“We label things as garbage too readily.”

His work has also captured the attention of designers like Jeremy Scott and Viktor & Rolf, with whom he has collaborated. In fact, designers Viktor Horsting and Rolf Snoeren have written the foreword for Reimer’s autobiographical coffee-table book, coming out in March 2019. “I look to the fashion world for inspiration in terms of textures, patterns and shapes,” says Reimer, “but I like using those elements with a mundane object, like a tube of toothpaste.” For that reason, he doesn’t look to other makeup artists for inspiration—ever. “When you start to look at other artists’ work, it subconsciously dictates what you perceive as beauty,” he says. “Those makeup artists have millions of followers, and they’re doing the same smoky eye and contoured face over and over again. How is that inspirational?”

Curious how Reimer makes a his looks happen? We had him break one of his most talked about looks down.

Photography courtesy of Lyle Reimer
Get the best of FASHION in your inbox Thanks for signing up!
The latest fashion, beauty and celeb news delivered right to your email #FASHIONforall Now, check your inbox to complete your subscription
We won’t ever use your email address for anything else
Want even more FASHION? Follow us on social media.