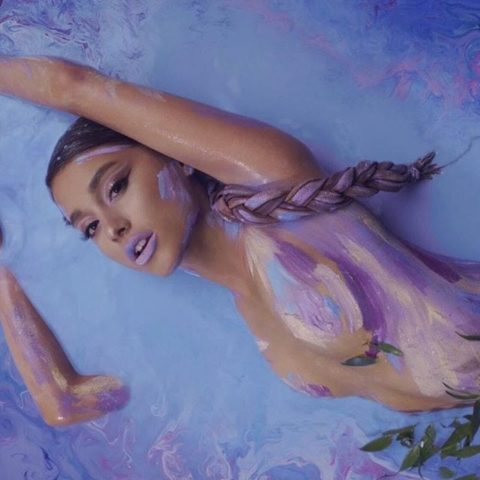 This summer Ariana Grande’s “God is a Woman” music video dropped and left pretty much every viewer in awe. Not only did Grande deliver a powerful message–with her incredible vocals, no less–she also blessed us with one of the most beautiful shots in music video history. I mean, she  looks like she’s floating in a whirlpool of metallic nail polish. Situated at the centre of her own cosmic universe, Pete Davidson seems like the farthest thing from her mind.

But while the scenes definitely give off a goddess vibe, many viewers were reminded of a much more down-to-Earth practice: taking a bath, albeit a divine one just like Grande. Shortly after its release, user @grandeslite tweeted stills from the video at Lush Cosmetics saying, “make a bath bomb that looks like this & call it god is a woman so I can bathe feeling like a goddess.”

Lush got started on the bath bomb back in July, after seeing the initial tweet. “I will be sure to pass this dreamy #bathart along to our teams to see what they think,” an employee responded. Then, Grande herself got involved, “omg @lushcosmetics i’ll do anything” she tweeted.

omg @lushcosmetics i’ll do anything

With everyone on board, product creator Jack Constantine immediately got to work on a prototype and on July 20th, sent one off to Grande.

I’ve finished the #godisawoman #bathbomb and sent it to @arianagrande fresh from the #lushlabs ??

This Thursday, that request becomes a reality as Lush launches their “Goddess” bath bomb in North America. Its combination of reflective purples, shimmering silvers and sparkling blues provides an exact replica of the dreamy waters.

The aromatic sphere is built around sensual notes of oudh and sandalwood, while jasmine, osmanthus and rose oil help to soothe and relax the body. A mix of fair trade cocoa butter, shea butter and liquid gold argan oil also help soften skin.

Once these ethereal bath bombs drop, Instagram is sure to be overrun with celestial-looking tubs as everyone attempts to live out our own “God is a Woman” fantasies.