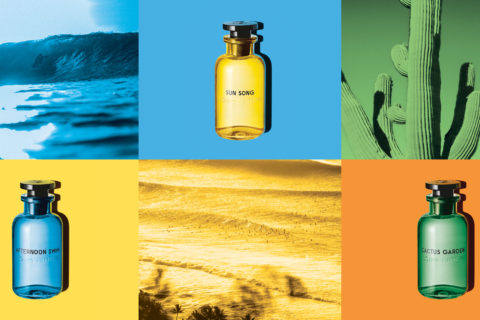 “I have no excuse to do bad perfumes,” says Jacques Cavallier Belletrud. “I’m free in creation. I’m free to use all the materials I want. Price is not an issue.” It appears that the in-house master perfumer for Louis Vuitton is in the enviable position of working with no limits or restrictions. “I’m like a creator proposing my vision, which is really unique in the world of perfumes,” he continues. “We launch perfumes when we think they are ready.”

This month, the brand is debuting Les Colognes Louis Vuitton—Sun Song, Cactus Garden and Afternoon Swim—that were inspired by Los Angeles. Cavallier Belletrud chose the sprawling West Coast city because he finds it “magical” and the climatic contrasts remind him of his home of Grasse, France. “You see the Mediterranean Sea, and then you have the mountains,” he says. “Here, you have the ocean and then the desert.”

Called Cologne Perfumes, the three scents capture the concept of freshness, which Cavallier Belletrud admits has been one of his obsessions since he created the seminal L’Eau d’Issey in the ’90s, referring to it as “the first transparent perfume for women.” Like traditional colognes, which are light and sparkling but ultimately fleeting, these three were formulated using new techniques to manipulate the raw materials, making them longer- lasting for the wearer.

Like traditional colognes, which are light and sparkling but ultimately fleeting, these three were formulated using new techniques to manipulate the raw materials, making them longer- lasting for the wearer.

For the Sicilian lemon in Sun Song, Cavallier Belletrud only used a fraction of it and kept the heart. “Usually, lemon is gone from the skin after five minutes,” he explains. “This one lasts for two hours because it is so concentrated.” For Cactus Garden, he sourced a varietal of yerba maté from Argentina (it’s exclusive to Louis Vuitton) and has the leaves shipped straight to Grasse, where they are dried and an extraction is made from them. “Maté maintains its freshness for hours and hours,” he says. And for Afternoon Swim, which was intended to be like “a shot of energy with a lot of vitamins,” he used a bitter bergamot. “It comes from the beginning of the crop, in the first few weeks of December, so it’s very green, very grapefruit-like and very long-lasting.”

As a final jolt of colour, three works by L.A. multimedia artist Alex Israel, whose own projects reference the City of Angels, have been matched up with the scents and appear on the outer boxes as well as on a travel case and flacon. While the free-spirited California cool of Israel’s prints obviously makes the collection feel even more special, Cavallier Belletrud believes we ultimately buy a perfume if it sparks an emotion triggered by our past. “Some people think it’s only a product, but it’s much more than that. It’s connected to our memory.”

“This perfume’s freshness is created by a specific quality of orange that grows in Sicily. We are reworking it in Grasse by fractionating it—taking out 80 per cent of the oil and keeping the heart of the orange. Then you have mandarin, which is incredible because it smells very citrusy, floral, fruity and aromatic all at the same time. And then there is bergamot, but this one is very bitter.”

“I wanted to find a very intense quality of orange flower, so I used bitter orange. The tree blooms with so many flowers that it makes two different raw materials. One is a distillation of neroli oil. It’s quite expensive but very sunlike. The second is orange flower absolute. It’s very intense, more animalic and much more creamy. Of course, there is citrus, which is lemon. And I put musk in the drydown. The contrast between the vibrant lemon, the floralcy of the orange flower and the neroli—the musk takes it in its arms and gives it a roundness.”

“I wanted to create a fresh perfume that has a lot of intensity but is very soft. Maté is the national drink in Argentina. It smells a bit smoky and a bit like tea. I have also used a fruity bergamot; it’s a very chic top note. I buy lemon-grass oil from Vietnam, and we rework it in Grasse. It’s citronella, herbal and a bit green. It’s really a perfume of promise.”

Photography courtesy of Louis Vuitton
Get the best of FASHION in your inbox Thanks for signing up!
The latest fashion, beauty and celeb news delivered right to your email #FASHIONforall Now, check your inbox to complete your subscription
We won’t ever use your email address for anything else
Want even more FASHION? Follow us on social media.