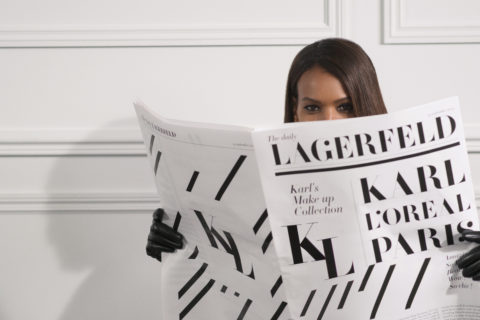 L’Oréal Paris is Releasing a Makeup Collaboration with Karl Lagerfeld

The late designer initiated the partnership with the French brand and was able to complete the collection prior to his passing in February.

Karl Lagerfeld continues to serve up his signature Parisian-inspired style, even from beyond the grave. A cosmetics collaboration with L’Oréal Paris, initiated by the renowned designer before he passed away in February of this year, will come to fruition on September 27, on the eve of Paris Fashion Week. “For L’Oréal Paris, all of our fashion designer collaborations are an honour, but this one is particularly meaningful,” said Delphine Viguier, L’Oréal Paris global brand president. “While Karl upturned the hierarchy of the landscape to democratize fashion, L’Oréal Paris is committed to making beauty according to women’s own rules and desires.”

The collection will reflect Lagerfeld’s “iconic rock-chic style, fused with a sense of Parisian elegance that is both classic and effortless,” according to L’Oréal Paris. “This line of makeup truly reflects the Karl Lagerfeld brand universe and what Karl loved in makeup—he often used eyeshadows as colours in his sketches,” said Caroline Lebar, head of image and communication at Karl Lagerfeld. “Karl liked it when a collaboration resonated with his brand and would make a real impact to many people.” Along with the collection, the brand will also release a campaign inspired by some of Lagerfeld’s most iconic quotes. A preview of the shoot hints that model Liya Kebede could be the face of the collection, her eyes peeking out from behind a Karl X L’Oréal Paris branded newspaper.

The #KARLXLOREALPARIS makeup collection will celebrate Karl’s vision of beauty and his creative legacy. #LOrealParis and KARL LAGERFELD will reveal the exclusive collection this September during Paris Fashion Week. Stay tuned!

“For the House of Karl Lagerfeld, it is an exciting moment to bring these two Parisian fashion icons together in one compelling collaboration, and bring it to life in such a cool way—and Karl’s way,” said Pier Paolo Righi, CEO of Karl Lagerfeld. Canadians can look out for the products on shelves and online in February of 2020.

Photography courtesy of L'Oréal Paris
Get the best of FASHION in your inbox Thanks for signing up!
The latest fashion, beauty and celeb news delivered right to your email #FASHIONforall Now, check your inbox to complete your subscription
We won’t ever use your email address for anything else
Want even more FASHION? Follow us on social media.