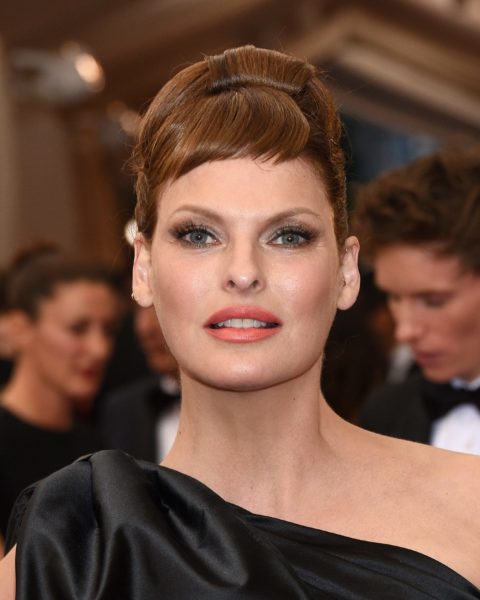 "I thought the pump was broken and I was banging it. It never crossed my mind that I had run out. I’ve never finished a product in my life."

The product material accompanying Erasa XEP-30 Extreme Line Lifting and Rejuvenation Concentrate should come with a warning: “After regular use, the skincare professionals in your life may become suspicious that you’re seeing someone on the side.” At least, that’s what Linda Evangelista’s derm accused her of during a recent visit.
“I told him I hadn’t seen anyone else, and he said: ‘But your melasma! You have the most difficult melasma of all of my patients!’” (It’s a skin condition that causes patchy-brown, tan and bluish-grey discolouration on the cheeks, upper lip, forehead and chin and is thought to be caused by overactive melanocytes.) In the past, Evangelista managed her melasma with Fraxel laser treatments, but since she started using Erasa more than two years ago, she hasn’t needed them.

The iconic Canadian supermodel learned about the product when her aesthetician’s husband suggested she try it. She says it was the first time she had actually finished a cream. “I ran the bottle under hot water; I thought the pump was broken and I was banging it,” she laughs. “It never crossed my mind that I had run out. I’ve never finished a product in my life.” She was so taken with Erasa’s results that she met with co-founder Julius Zecchino and joined the company as vice-president and creative director.

So what’s in this anti-aging elixir that’s been described as “Botox in a bottle”? First off, it contains a neuropeptide that is synthesized to mimic the paralyzing venom a cone snail releases. “[Used] topically, it just relaxes the muscles,” explains Zecchino. “The [XEP-30] molecule does that.”

Some dermatologists have questioned whether neuropeptides in a cream can penetrate deeply enough into muscles to cause them to relax. One suggested it was like pouring a small glass of water onto a mattress, saying it wouldn’t make its way to the other side. “That dermatologist wants you to go for Botox; he doesn’t want you to use a topical,” quips Evangelista, who says she stopped having Botox treatments around her eyes but did have one treatment to her forehead six months ago. Zecchino adds that the concentrate contains a unique patent-pending delivery system that ensures the active ingredients “go through the mattress.” “We don’t just put the molecule on the surface,” he explains.

Zecchino says that in addition to the synthetic cone snail venom, the concentrate contains whey protein, which is a collagen booster; niacinamide, to improve skin’s elasticity; and glabridin, which is an anti-inflammatory and a skin-lightening ingredient from licorice root extract. (This is the ingredient that Evangelista says helped her melasma.) There are also polymers and microspheres that even out the skin tone and reduce the appearance of wrinkles.

“The fillers immediately fill in and improve the appearance, and that helps with compliance because people see things working right away,” says Zecchino. “They will keep using it and get real effects in two to three weeks.” Evangelista says she would be too afraid to stop using Erasa, as the benefits have been so noticeable. “It’s so nice to be able to have integrity when I’m talking about a product,” she says. “I have gotten great results from it.”