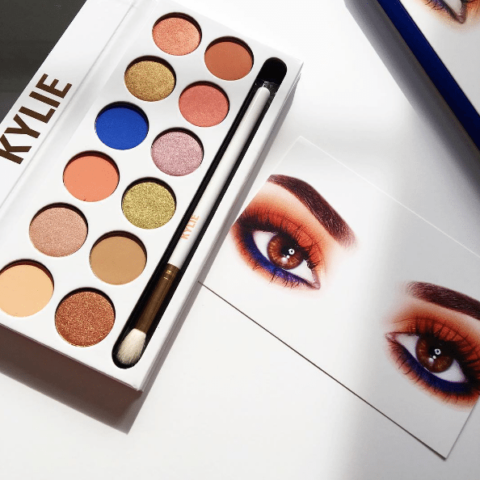 When Kylie Jenner announced she would be launching a “Royal Peach” palette, the Internet went wild (no surprise there).

But it looks like fans of the 19-year-old makeup mogul are less than impressed with the peach-themed eyeshadow palette because of its smell.

Kylie Cosmetics customers were under the impression the Royal Peach palette would be similar to Too Faced’s Sweet Peach version, which smells and tastes (uh, according to reviews) like peaches.

Kylie cosmetics is coming out with the royal peach palette??? ?? wonder if it will smell like peaches too? LOL

Unfortunately, many found King Kylie’s eyeshadows did not smell like peaches, but rather “really strong chemicals,” “chlorine” and “paint.”

Just got the royal peach palette and it smells like really strong chemicals… @KylieJenner pic.twitter.com/TQ43G8xwmZ

Got my @kyliecosmetics royal peach palette, opened it, and it smells so strong of chemicals and glue that it gave me an instant headache ?

Someone wanna explain why my Royal Peach Pallette smell like chlorine

Ok I just got the royal peach palette & the colors are amazing but tell me why they smell STRONGLY like paint ? @KylieJenner @kyliecosmetics

Beauty vlogger Jordan Byers even made a “brutally honest” video review on the product, saying “this smells exactly like the chemical [turpentine] that you take oil off of the [paint] brushes with.”

Because of the unexplained smell, some users even questioned whether or not the palette was safe to use.

guys please be careful with the new royal peach palette if yours has the smell too. I genuinely don't think it's safe

Jenner is no stranger to controversy when it comes to her cosmetics line, however. Complaints of frayed lip gloss wand applicators, leaked customer information, poor service and delivery and the failure to “resolve underlying causes of a pattern of complaints” earned her company an F grade from Better Business Bureau last July. (BBB later reassessed the rating, removing the “F” in favour of “no rating” because it “[had] been in business less than one year and does not have a sufficient track record for BBB to rate it.”) She’s also been accused of copying ads and product packaging designs for her cosmetic products.

“I’m sick and tired of people coming for my business,” she wrote on her official/app website last year. “I love everything about Kylie’s Cosmetics and I will do anything in my power to protect and improve it every day and make you guys happy. I don’t want to respond to the haters but you guys deserve an answer and to know the facts. I love you and apologize to anyone who felt the urge to complain and didn’t receive the service they deserve.”

So far neither Kylie nor Kylie Cosmetics have officially addressed the controversy surrounding the Royal Peach palette smell. Smell ya later….

Photography via Instagram/kyliecosmetics
Get the best of FASHION in your inbox Thanks for signing up!
The latest fashion, beauty and celeb news delivered right to your email #FASHIONforall Now, check your inbox to complete your subscription
We won’t ever use your email address for anything else
Want even more FASHION? Follow us on social media.