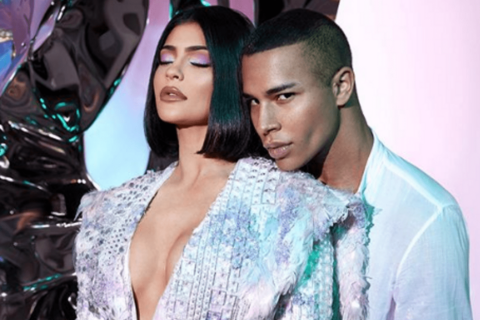 And it lands Friday.

The Kardashain-Jenners have a long running relationship with the brand’s designer, French wunderkind, Olivier Rousteing, so it makes sense that someone in the family would team up with him on a collaboration.

So far we know that the collection will include an eyeshadow palette, as well as a lip colour, and that it was inspired by look 26 of Balmain’s most recent couture collection (which Jenner wore to this year’s Grammy Awards). “Olivier and I talked through which products we wanted to create, and we agreed that an eye shadow palette, a matte lip kit and a high gloss would really bring together the look we were aiming for,” Kylie told WWD.

this look is going down as one of my favvvv red carpets! thank you @olivier_rousteing for letting me borrow this gorgeous @balmain couture for the night. you killed it w thisss?✨

We also know that the collection will drop on September 26 – the same day as Balmain’s S/S20 show.

And speaking of the show, WWD reports that Rousteing has asked Jenner to serve as the artistic director for makeup backstage. “She wanted to know when the first make-up artist will be arriving backstage, so she’s going to be there at 7:30 a.m. to be the first to work on all the models,” the designer told the site. “There’s a definite look for the show, but within that, each girl will have different make-up depending on their skin tone and the clothes they’ll be wearing.” This will be the first time Jenner has been at Fashion Week for her makeup brand.

Rousteing also praised Jenner’s work ethic, saying, “She’s incredibly hands-on. It’s quite incredible working with Kylie, because she has a very clear vision of what she wants and she’s very committed to the job.”

This collaboration marks the second time Rousteing’s Balmain has collaborated on a makeup line, having teamed up with L’Oréal Paris in 2017. Both of them, Rousteing says, are pre-cursors to the brand’s own line of cosmetics, and fragrance. Watch this space.

Kylie Cosmetics x Balmain will be sold exclusively via Kyliecosmetics.com.

Photograph courtesy of Instagram/KylieJenner
Get the best of FASHION in your inbox Thanks for signing up!
The latest fashion, beauty and celeb news delivered right to your email #FASHIONforall Now, check your inbox to complete your subscription
We won’t ever use your email address for anything else
Want even more FASHION? Follow us on social media.