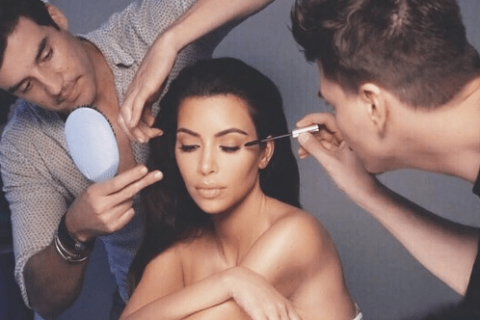 Everything We Know About Kim Kardashian’s Beauty Line

It’s safe to assume that Kim Kardashian loves surprises. From her collab with Kylie Cosmetics, to the fateful day of the Taylor Swift phone leaks, she’s always been one to keep us on our toes. And luckily for us, that means that by the time she announces a new project, we generally don’t have to wait very long to get our hands on it. Which is a beautiful thing.

The first launch? A creme contour and highlight kit.

So much for being over the highlighting trend!

Kardashian-West also revealed there are some fragrances in the works.

In an interview with WWD, Kim revealed, well, a lot. First, that there’s a concealer coming in a couple of months. She also said she plans to do a new product drop every month.

“A lot of my stuff is going to be for skin. [I’m] trying to mirror skin care with makeup. It’s going to be a different vibe; it’s not going to be a full colour cosmetics [range] with shadows and all of that to start. I will probably do some kits here and there of specific [makeup] looks I’ve done and keep it within the looks,” she said.

First look at our new product!! Get ready! Our new Powder Contour and Highlight Kits are coming soon… Stay tuned for the reveal #KKWBEAUTY

Kim also gave a sneak peek at the kit via her Instagram stories.

And though Kardashian did tell WWD her beauty line would be different from sister Kylie Jenner’s, her latest KKW Beauty tease proved otherwise: a lip print tagged @kkwbeauty.

So will we be getting KKW Lipsticks next? Stay tuned!

Photography via Instagram/kimkardashian
Get the best of FASHION in your inbox Thanks for signing up!
The latest fashion, beauty and celeb news delivered right to your email #FASHIONforall Now, check your inbox to complete your subscription
We won’t ever use your email address for anything else
Want even more FASHION? Follow us on social media.