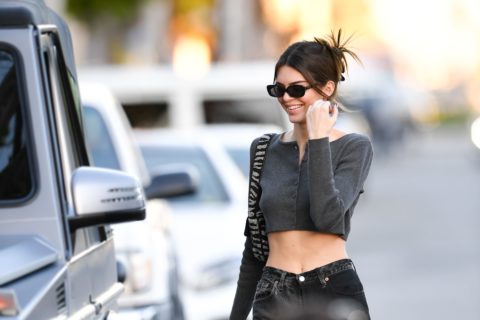 And it could be the biggest yet.

If you’ve ever wondered when and if Kylie Jenner was going to team up with older sister Kendall Jenner for a makeup collab then you can put those thoughts out of your mind, because a Kendall x Kylie Cosmetics collection is officially underway.

Kylie first teased the collab in a vlog uploaded to her YouTube channel in June of last year. In the video, Kendall was seen at a meeting at the Kylie Cosmetics HQ, discussing packaging and texture for the collab. Then, everything went silent. Until Kendall appeared on The Ellen Show this week and confirmed the line is underway and will be released soon.

Speaking with host Ellen DeGeneres who asked if she was working on a collab, Jenner said, “Yes. We’ve actually not said anything that we’re doing it yet, so this is the first time people will know.” She continued, “I am the last sister, or the last family member I think!” Jenner added that contractual obligations were the reason for the collection being delayed. “I had a contract before with another makeup company. So now I am able to do it.” The model also joked that it was going to be the biggest launch because she’s Kylie’s full sister. “We’re going really big because I’m her full blood,” she said. “We’re taking it seriously.”

Kendall also admitted that she was wearing some of the products on the show, giving the clearest indication of what we can expect from the line yet. A neutral, wear-everywhere eyeshadow palette is pretty much a given, whilst a dewy highlight, mauve lip kit and a cream contour all look like possibilities, too.

Kylie has previously tapped all other female family members to collaborate, having launched collections with Kim, Khloe, Kourtney and mom, Kris Jenner. Most recently, Kylie also created a collection in honour of daughter Stormi for her upcoming second birthday.

Photo by PG/Bauer-Griffin/GC Images
Get the best of FASHION in your inbox Thanks for signing up!
The latest fashion, beauty and celeb news delivered right to your email #FASHIONforall Now, check your inbox to complete your subscription
We won’t ever use your email address for anything else
Want even more FASHION? Follow us on social media.