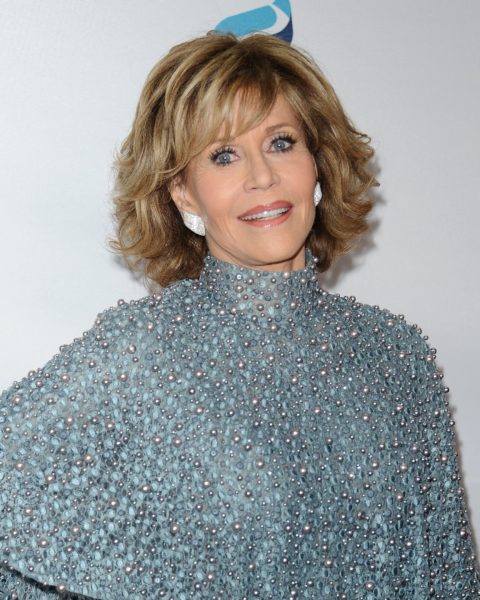 A couple years ago, Jane Fonda was at TIFF for the film, Youth, where she appears in a white-blonde wig and a truckload of ghostly white makeup as a faded 80-year-old film star. In person, Fonda wears much less slap and is celebrating her 80th birthday with serious style (backed by a lot of substance). It’s a master class in getting it right.

Join us in bowing down to the five life lessons we learned during our time with her.

Life is about choices.
“When you get older, you have to choose between your ass and your face,” says Fonda. “Last year I chose my ass, and this year I’m choosing my face,” she laughs. “I’m about 10 pounds heavier than I was [then].”

Lean on your team
Fonda came to Toronto with her superstar hair stylist, New York’s Upper East Side guru, Roy Teeluck in tow, to tend to her ‘do. Her makeup was entrusted to makeup artist for L’Oréal Paris Canada Eddie Malter with whom Fonda exchanged beauty tips. “Jane is an encyclopedia on how to present yourself to media and how to walk the red carpet,” says Malter. “My main goal in creating her look was to make her silk-like and flawless skin glow.” Calling her bone structure “amazing” and “a makeup artist’s dream” Malter added subtle radiance with a touch of True Lumi Liquid Glow Illuminator in “Golden” to the high points of her face.

Less is more (surgery, that is)
Fonda is candid about having had some ‘tweaks.’

“I look good for my age,” she says frankly. “But I’ve worked hard for that. I’ve paid for some of it (she points to the area under her eyes and her smooth jawline), but I haven’t overdone it. I still have wrinkles.”

Everyone should remember this exchange when they start panicking and speed-dialing the plastic surgeon.

Stay involved
Maybe we need to say “You have the same number of hours in a day as Jane Fonda” instead of citing Beyoncé as the world’s most productive celeb. Fonda is an active blogger and says “I’m not just a movie star. I’m working, but I’m also an activist. I was in Vancouver for a rally, I’m going to go a climate summit in Paris. I have a lot of different aspects of my life. I am an older woman and I think it’s important for people to see that.”

Above all else, maintain your sense of humour
“I have a fake hip and a fake knee and a fake thumb. And most of my back is metal. I’m basically bionic.”