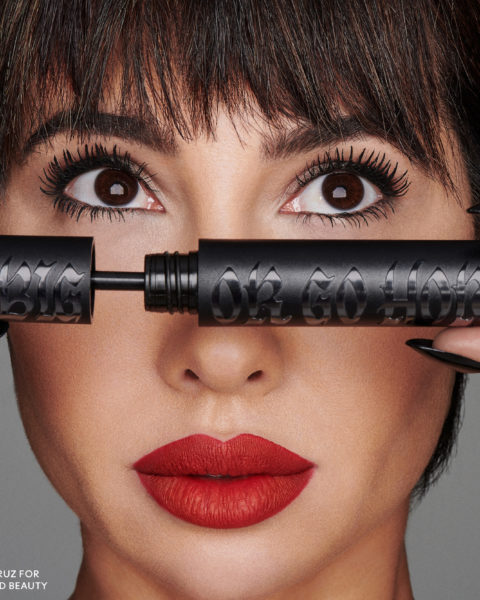 The Orange Is The New Black star shares her thoughts on diversity in the beauty industry, vegan cosmetics and killer lashes.

If you’re a fan of Orange Is The New Black—the extremely popular Netflix series loosely based on Piper Kerman’s memoir of the same name—there’s a good chance you have a favourite character. There’s also a good chance that favourite character is Flaca. With her signature winged liner and broadcast-from-behind-bars beauty podcast, it’s no wonder she also found a fan in Kat Von D. The character, played by Jackie Cruz, is known to wear the brand’s Tattoo Liner in the show, so it’s only fitting that Cruz would become the first celebrity face of Kat Von D, promoting their new vegan volumizing Go Big or Go Home mascara.

Here’s what she had to say about landing her dream campaign, overcoming adversity and promoting diversity in the beauty industry—plus a few on-set makeup tips.

You’ve mentioned having dreamed of doing a campaign with Kat Von D. How does it feel to have realized that dream?

Flaca did say, “One day, I’m gonna get a campaign with Kat Von D beauty, watch!” My makeup artist—who’s here right now with me, because we have to share this moment—if it wasn’t for her, they wouldn’t know about me and I would just be the liner girl on Orange. It’s like getting Orange Is the New Black all over again, you know what I mean? That’s what it feels like. I had this major TV show that made history and I feel like I’m making history with Kat Von D as well because I’m the first talent she uses. I feel so special. And she’s Latina and she’s supporting me. It’s a great example to show the world and the beauty industry. It’s time for diversity and women to open doors for each other.

Have you been a fan of the brand for a long time?

I discovered her on OITNB when Flaca wore her liner. And I was like, “Oh, Kat Von D Tattoo Liner, maybe that’s why they used it, because it’s a tattoo on my eye!” I ended up being the liner girl that cries in black. It’s just crazy how it has become a reality. My makeup artist told them, “You know what, Flaca uses the Tattoo Liner and she’s a big fan of yours”—and that was five years ago. I met them again at the 10-year anniversary and they got to really know me. We started talking in December and on Christmas I got the, you know, “it’s happening!” That was my present. I thought it was one billboard and then I found out it’s four billboards in Hollywood, right around the traffic. And you know Hollywood is all about the traffic. It’s global, too, in 36 countries. We just launched and we’re number one in London, Paris and the U.S. digitally.

You’ve been open about your past trauma, following the car accident you were involved in. Given what you’ve gone through, how does it feel to now be the face of a major beauty brand?

Is it important to you to use vegan beauty products?

Yeah, number one because I don’t really like to put makeup on too much because I have very sensitive skin. So I realized that vegan ingredients are what doesn’t break me out. It’s perfect—I love animals so it feels good using it. No animals got hurt!

Any on-set makeup tips you could share with us?

You know how people usually just roll [the brush] up when they put on mascara? I like to do it backwards. So I brush it in from the root on the back of the lashes first before the front, and then do that comb-it-out zig-zag thing. And then flick it out at the bottom, because I have long lashes on the bottom. When you have a blemish, I learned to put raw tomato on it the night before and then in the morning, the blemish is gone. Oh, and my hair stylist uses Kat Von D Shade + Light Contour Palette in my hair. I have a scar from my brain injury, so she puts a little bit of that to match the colour of my hair, and she says the fine powder blends in really nicely. You can use it for your eyes and also for your hair and for ponytails. You know where you have less hair on the corners of your head? I like to fill in there. I sometimes use the mascara as well. It’s not just for my lashes, but sometimes for my grey hairs as well.