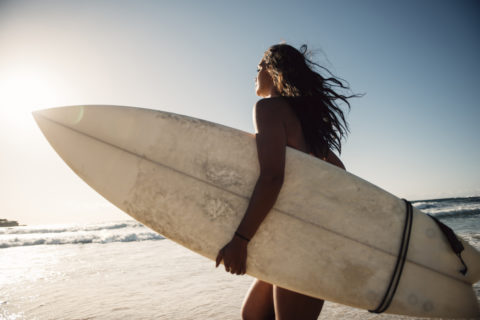 Yesterday, Michael Gordon, the founder of Bumble & bumble, shared a photo from the shoot for the original bottles of Surf Spray, the brand’s sea salt spray that launched in 2001. It reminded us of a story we ran a story in our Summer 2015 issue that tracked the rise the of the now iconic product as well as John Frieda‘s Beach Blonde Ocean Waves, now discontinued. At the time, they introduced a new product category that went on to inspire countless knockoffs and is now synonymous with summer hair.

Still life from the original surf spray shoot. Hand decoration on the bottles

MICHAEL GORDON, Founder, Bumble and Bumble: “There’s always a slight wind at the beach. I don’t know what it is—it’s the atmosphere, the humidity. Often if you come out of the sea and your hair dries, it’s got this very distinct, cool texture. So I simply asked the chemists if they could combine stuff and give us that kind of texture. That was the idea.”

HARRY JOSH, International Creative Consultant, John Frieda: “When we had photo shoots for Victoria’s Secret early in my career, like 20 years ago, I noticed that the hair was amazing by the end of the day and we got the best pictures then. The model’s hair had been blown by the wind so much that it would clump and get piece-y and ropy, so it had this amazing look.”

LAURENT PHILIPPON, Global Artistic Director, Bumble and Bumble: “I was on a trip to Tulum for an editorial shoot. We went to the sea and when the model’s hair dried, it had this amazing texture. We weren’t sure if it was just something in the water, so we bottled some and brought it back [to the office].”

TIM RUSH, VP Global Communications, Bumble and Bumble: “It was a perfect storm of people thinking the same thing at the same time. I knew about Surf before I even came to Bumble because it was really the first of its kind. It was one of those products that I think people didn’t know they needed until it came out. Over the course of the years when I’ve been working with other hairdressers, I hear so often, ‘Oh, I had a bottle of sea water’ and ‘You guys were so smart to do it.’”

JILL LYNCH, Chemical Engineer, John Frieda: “Sally [Hershberger] really was the motivation behind this product. It stemmed from some early work that she had been doing with her clients because she thought windswept hair looked really sexy on them.”

SALLY HERSHBERGER, Creative Consultant for John Frieda 1999–2006: “I used to be a surfer, so I was very aware of that kind of hair. I’m from California. When I come out of the ocean, my hair is genius. That’s where it came from. I used to shoot with Herb Ritts. His whole body of work from the ’80s to the ’90s with Tatjana [Patitz], Christy Turlington—all those nudes on the beach—features that beachy, really textured hair. I was wrapping their hair and twisting it with saltwater to get that incredible texture.”

JILL LYNCH: “Sally would cocktail jojoba oil with sea salt. She asked if there was a way that the product could be created. Not only did she love it, but her clients loved that look but had no way of achieving it.”

SALLY HERSHBERGER: “Nobody else was doing it. I was Herb’s hairdresser. That was our look. Steven Meisel was shooting with Oribe at the time and they were doing more glamorous hair. I was doing more grunge-surfer hair. A lot of people used baby powder and egg whites. They used hand soap to make it more gritty.”

HARRY JOSH: “[Before salt sprays] there were other ways of getting the look. It wasn’t ideal, but you would use gel so it got crunchy and then put a pomade and stuff on top of it.”

MICHAEL GORDON: “Honestly, [the formulation] was quite easy. It only took two or three goes.”

JILL LYNCH: “Because the brand’s offices were in Connecticut, so close to the shore, they would actually hire young women with beautiful long blonde hair and send them to the beach for the day. Then they would have them come back to the office at the end of the day so they could capture what that look was and compare their products.”

MICHAEL GORDON: “We had this really fabulous bottle with black neoprene. It looked like a wetsuit. It was unlike anything I’d ever seen for hair. We had a fantastic French product developer. He said, ‘What do you think of this?’ in this charming accent. We took a couple dozen of these black bottles and a team to Florida. We cast some local models and cut their hair and sprayed this stuff in it. We started decorating the bottles with coloured Sharpies. It was a surfer beach party and everyone was decorating themselves with fake tattoos and drawing on the bottles. That pretty much became the packaging.”

TIM RUSH: “They were looking for different things that were a cue for the beach, so there was the [neoprene] scuba gear and then there was the shape of it—like a scuba tank—and the metal hardware.”

HARRY JOSH: “That texture didn’t really exist before Gisele [Bündchen] came on the scene. It was either the graduated bob, short pixie haircuts, CK One—that whole campaign and movement of heroin chic, flat-ironed hair. Suddenly the world had to have her hair. It became the most desirable look across the board, from edgy to middle America.”

JILL LYNCH: “It was really popular seasonally; people would buy a lot of it in the spring and summer, but then in the fall sales tended to decrease. And while it had a strong following, it really wasn’t [strong] from a retailer stand- point—they wanted to see volume throughout the year. We brought it back because the trend that we started continued and grew, and now there is that demand year-round.”

MICHAEL GORDON: “We didn’t really care what was happening [in hair at the time]. It was just what we did. Did I think it would be a success? Not really. I didn’t think about it. In those days, Bumble was still growing, so we didn’t feel pressure to think about sales. I was thinking, ‘What’s a great product we can make?’ I didn’t realize it would be so successful until it was copied. I do think it’s the most original product we’ve made—definitely. I think it’s probably the one.”