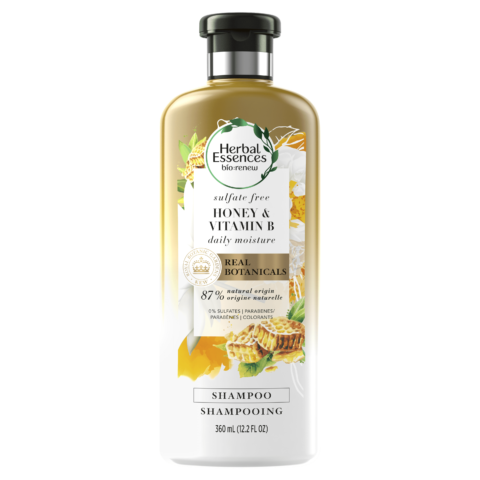 Herbal Essences may be most known for its 90s shampoo commercials featuring women in the shower doing their best Meg Ryan impression in the When Harry Met Sally restaurant scene (remember the ad slogan “A Totally Organic Experience”?), but now it has two new claims to fame: It’s officially part of PETA’s Beauty without Bunnies family, a green light given to brands that don’t test on animals, marked by a seal featuring a leaping bunny. And earlier this year it became the first mass beauty brand to have the blessing of the Environmental Working Group (EWG) on two shampoos in its Bio Renew collection.

EWG is the non-profit organization behind Skin Deep, a product database built to help consumers identify clean cosmetics and personal care items, making it a thorn in the side of many beauty companies that formulate with ingredients EWG has deemed harmful and hazardous. Nudged by focus groups who told P&G (Herbal Essences’ parent company) that EWG’s insights inform their beauty purchases, Herbal Essences extended an olive branch, bringing lab coats from both sides together to formulate two sulfate-free shampoos.

Since full transparency was required, the project began with P&G inviting EWG to its labs. “We found that we had a lot more common ground,” says P&G’s Senior Scientist Rachel Zipperian. “They were impressed by the level and the rigour of our safety testing, and the number of toxicologists we have on site that they got to meet with.”

After removing sulfates, the brand also had to create a new preservative system, which was tricky due to how long the company wants their hair products to sit on shelves. Reformulating its fruity and floral fragrance, the very thing those 90s ads suggested made the women scream in the shower (or the airplane) was also required, which took six months, says Zipperian. “Herbal Essences has so many sophisticated, complex fragrances. If we went with simple fragrances, things that are one or two ingredients, it would have been a lot easier.”

Herbal Essences also partnered with the Royal Botanic Gardens, Kew, an enormous green space, and the most biodiverse in the world, borrowing the brains of on-site botanists and mining its libraries of plants that’ve been collected for hundreds of years to learn more about the ingredients it uses such as aloe and argan oil. In the middle of a Canadian winter where we’re all most likely suffering from nature deficit disorder, may we suggest pausing Netflix for a sec and watching this short documentary on the collaboration for a hit of some Kew’s majestic trees, lush plants and blooming flowers.