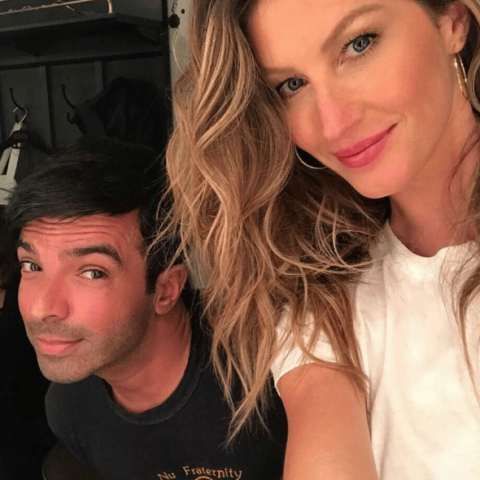 Harry Josh, AKA the Genius Behind Gisele’s Hair, On Why Trends Don’t Mean A Thing Anymore

"Self-confidence is bigger than trends."

Celebrity hairstylist Harry Josh is somewhat of a celebrity himself. With over 170,000 Instagram followers and a client base that includes Gisele Bündchen, Cindy Crawford, Rose Byrne, and the Victoria’s Secret Angels, even his hair tools are famous. (Have a look for yourself; you’ll recognize the seafoam green instantly.)

When we met up with Josh in Palm Springs, he told us why the idea of hair trends doesn’t mean much to him anymore, why the Kendalls and Gigis of the world don’t switch up their hair, and which products he uses to get the best hair. Read our interview with Harry Josh, who also holds the title of International Creative Consultant for John Frieda, below.

How do you strike a balance between embracing someone’s natural texture while making their hair look its best?
We often see things on the runway that are super unrealistic for the average girl. So I never go on the trend thing anymore because the trend thing is so…it’s nothing. Before, you waited to get your September issue or your March issue to see what everyone is gonna look like next season. Now it’s like, that day. If it’s geek chic in Milan today with girls in centre parts and glasses, no one’s gonna wait six months. They’re gonna go get glasses tomorrow. It’s become a whole other world and it’s become easy for us to find trends. We just look at red carpet premieres. It’s become such a different time. Trends are instant. I think it’s empowering. Don’t follow trends. Get inspired by what you see and figure out what will work for your day-to-day life and your texture and be the best version of what you can be.

What role does Instagram play in finding hair inspo?
The problem is the people we follow, the trendsetters, can’t do anything about [their hair] because they’re all under contracts; the Kendalls the Gigis, they have so many endorsements. They want them to look exactly like that. So instead of looking at those girls, we’re looking at the new faces of modelling that people aren’t familiar with yet. “Who’s that girl with the haircut?” Like last season, no one knew who the girls [walking the Prada show] were, but they knew their haircuts.

Should people Botox their scalp to stop it from sweating?
I don’t know. There’s no data yet. I think it’s a terrible idea. Honestly, sweat just dries and it doesn’t smell. Your hairline might be a little jacked but that’s all. And hair accessories have come so far. 10 years ago they were for kids, never for a chic girl. Now they’re amazing. They can elevate a look very quickly by hiding the flaws you have. It looks like you tried.

Is putting effort into your hair cool again?
Yeah, I think the pendulum will always swing back and forth. We’ll never go back to the 50s and 60s when people got their hair set and that was their look for the week. I think that people get that out at events, at shoots, at weddings, etc. But it’s just too labour-intensive.

I think there’s a stigma — if you do too much, you look old. Even on red carpets for the Oscars, people are so worried about looking “old.” But self-confidence is bigger than trends. I think there’s an inner confidence we need to ignite in women to be more daring and be bolder and not be so scared to do things. I’ve been in the fashion industry for 20 years, and these girls look crazy and they know it. They’re backstage and they know it but they have to work it. Especially on photo shoots when they’re in a garbage bag with some weird thing in their hair and they know they don’t look pretty but that’s not the point. It’s art. It’s about owning it.

What’s great about that, and why I said it’s the best one on the market is because all the best masks to date are over $100. No one can get that. All the crappy ones are filled with so much stuff that they make your hair feel soft initially, but when you blow-dry it you can still feel the slime. You can see smoke coming out. I always say to women, don’t use it in the shower. Put it on your bathroom counter. People do all these nighttime rituals, moisturizer, eye cream, etc. Yes, it’s ideal on washed hair because the strands are wet and therefore open but doing it on dry hair is better than not doing it at all, if you don’t have ten mins in the shower. Or just wet your hair by spraying it and muck it in your ends and go to bed. Use those moments to treat your hair. That’s how you manage to squeeze a mask into your routine, because just doing it in the shower is very ambitious, to be like “I’m gonna sing in here for ten minutes while this sinks in.” It’s about finding innovative ways to put on masks so you don’t feel like you’re wasting time. As long as your hair’s wet, it’s gonna work well. On dry, it’ll work, too, but not as well. It’s about half as effective. Just mist it with water and you’ll open the shaft up. It doesn’t have to be scrubbed to be open, it just needs to be wet.

Photography via instagram.com/harryjoshhair
Get the best of FASHION in your inbox Thanks for signing up!
The latest fashion, beauty and celeb news delivered right to your email #FASHIONforall Now, check your inbox to complete your subscription
We won’t ever use your email address for anything else
Want even more FASHION? Follow us on social media.