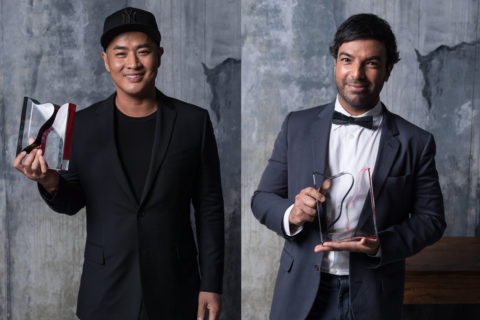 We revisit our May 2016 profile on the beauty dream team in honour of their wins last night.

To understand the dizzying schedules of hairstylist Harry Josh and makeup artist Hung Vanngo, you need only know that finding a small window of time for them to be together (while not on the clock) required a novella’s worth of emails. First, they were in L.A. readying Orange is the New Black’s Taylor Schilling for the Golden Globes; then, they jetted back to New York, where Vanngo attended to a Marc Jacobs event and a Vanity Fair shoot; and finally, they managed to settle on a time between Josh working on Dakota Johnson for a Tonight Show Starring Jimmy Fallon appearance and Vanngo doing Selena Gomez’s makeup for Saturday Night Live.

Though their list of celebrity clients is now lengthy, it was Helena Christensen who first brought them together back in 2008, when they were booked on a huge editorial for Numéro Tokyo. Josh was already a regular favourite of the super, but for Vanngo it was a turning point. “It was a big shoot with a big photographer, Regan Cameron, and everyone there was pretty established, so it was a bit of a mystery how Hung was there,” says Josh, laughing. But on a day that would have proven challenging for even the most seasoned artists, Vanngo exhibited grace under fire. “We had 14 shots all with major hair and makeup changes that we had to get done in eight hours, because that’s all the time that Helena had,” he explains. “I was so nervous, though,” Vanngo admits. “I knew people had to fight for me to be on that set, so I had to prove myself.”

Josh was quickly won over by Vanngo’s approach and attitude. “There was a sense of humility about Hung that I liked,” he says. What Vanngo remembers most from that day is a bit of wisdom Josh doled out. “He told me, ‘With a young girl, you are going to tell her to look up and she will do that until you tell her to look down. But when you work with people of a certain level [like Helena], you have to work around them,’” recalls Vanngo. “It was the best advice I’ve ever received.” Josh, whose career by 2008 was on a continuous upswing, took Vanngo under his wing. “I was connected to a lot of high-profile models and celebrities [Gwyneth Paltrow, Miranda Kerr and Gisele, among them], so every time an opportunity would arise, I would say, ‘You have to try Hung,’” he explains. Soon enough, publicists, and advertising and editorial clients took note of the emerging beauty dream team.

One thing that binds the two is that their paths toward success haven’t been without challenges. Josh moved to South Beach from Vancouver in 1991, and then onto New York on his styling pursuit. “I thought that because I was a big hairdresser in Canada I was qualified, but I was rejected by all the agencies,” he confesses. Josh spent almost 15 years hopscotching among assistant gigs, a job at a Madison Avenue salon and a long stretch as a casting agent at KCD before getting his big break in 2002. “Word got out that I had been doing models’ hair at my apartment, and then Vogue did an article on me,” he says. “My life changed overnight. Two days later, my first job was with Patrick Demarchelier for Harper’s Bazaar—I didn’t even have an agent.” Vanngo faced a similar uphill battle; he quit hairdressing school after a brief stretch, working at a Calgary salon during the week to pay the bills and devoting his weekends to makeup. In 2003, he headed to Toronto, where he worked steadily on editorials. Vanngo moved to New York in 2006, when a small agency eventually sponsored his visa. But until that fateful encounter with Josh and Helena, he survived by flying back to Canada a few times a week to see clients.

“There’s something really special about the fact that we are both Canadian and from immigrant families,” says Josh, whose parents were born in India (Vanngo was born in Vietnam). They’ve also become the very role models they struggled to find growing up. “It was all white people, so to come up through the ranks as minorities and now be labelled tastemakers is huge,” says Josh. They are also kindred spirits in their beautifying approach. “All we care about is making girls look gorgeous…that’s the point of our work,” Vanngo says matter-of-factly. “A lot of people need to do something weird and different to prove they’re an artist, but we just obsess over how to make the girl look beautiful,” adds Josh. Before working with anyone, the two pore over Getty Images, examining the best looks for their clients, then assign them prep homework. Their actual working style is akin to a dance, says Josh. “We don’t ever have to even say anything to each other; we just know.”

Beyond their analogous upbringings and shared beauty sensibility, what is obvious to anyone who meets them is that they are passionate about their chosen paths. “We are not jaded at all,” says Vanngo. “Every day, I’m still really excited about doing my job, and so is Harry.” In fact, Josh credits Vanngo for reigniting that very drive in him. “I was in a resting part of my career where I felt secure, but meeting Hung reinvigorated my creativity and ambition,” he explains. So while a calendar jam-packed with bookings may indicate career contentment for some, Josh and Vanngo still have goals to meet. Topping the list right now: “American Vogue cover,” they reply in unison, without hesitation.