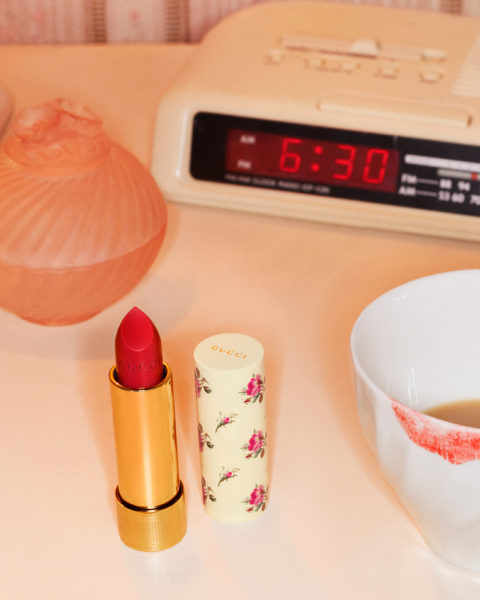 One of the ads places front and centre something no other lipstick ad has dared to do: imperfect teeth.

Since taking over the reigns at Gucci in 2015 and successfully reinventing the fashion brand into what can only be described as an industry juggernaut, creative director Alessando Michele has also been focused on revamping the beauty arm. Fragrance has been well underway—his first fragrance Bloom launched two years ago —but now comes a re-imagining of the makeup (the original line under Frida Giannini never launched in Canada). Launching today is lipstick: 58 shades in three textures which each come in their own distinct, vintage-inspired packaging. Michele chose gold tubes etched with an Art Deco pattern for the 36 satin shades; the casing for the 18 sheer colours is covered with a mid century rosebud print on ivory; and the four balms come in a robin’s egg blue, which represented femininity before it was reassigned to pink post WWII. Paying homage to his love of old Hollywood, Michele named the shades after movies and actresses from the gilded era.

Fronting the campaign are punk singer Dani Miller, models Mae Lapres, Achok Majak and Ellia Sophia Coggin, with the four being shot from only the nose down. But it’s Miller’s ad, in which she wears Rouge à Lèvres Satin in “Goldie Red” (the collection’s star shade) that is sparking the most conversation, since it places front and centre something no other lipstick ad has dared to do: imperfect teeth. Miller is missing her lateral incisors, leaving gaps on either side of her front teeth. When Gucci revealed it on their Instagram account on Saturday, they weren’t simply announcing their new lipstick; they ignited a conversation about beauty ideals. The image elicited strong reactions, with comments ranging from a mix of shock, aversion and absolute joy.

Presenting lipstick collection Rouge à Lèvres Satin from a new #GucciBeauty line ideated by @alessandro_michele. Creamy with intense colour, the formula delivers a long-lasting satin finish, that leaves lips smooth and soft, with lightweight, comfortable feel. Captured in the campaign by @martinparrstudio is Dani Miller @alienzarereal from the band @therealsurfbort wearing the shade number 25* ‘Goldie Red’, with creative direction by #AlessandroMichele, makeup by @thomasdekluyver and art direction by @christophersimmonds. #GucciBeautyNetwork #AlessandroMichele Discover all 36 shades through link in bio. @gucci

And the joy is what we should be focusing on. It’s a radical, refreshing move and in keeping with Michele’s vision; at his runway shows, the models are never wearing foundation, even when they have zits, says the brand’s newly minted global makeup artist Thomas de Kluyver. “We just wash the model’s face and leave the skin,” he says. “We’re trying to find beauty within those imperfections.” For Miller, getting celebrated by Michele is “really refreshing and so exciting” but she has an even bigger desire. “I hope this inspires youth and anyone else out there to speed up getting through their insecurities.”